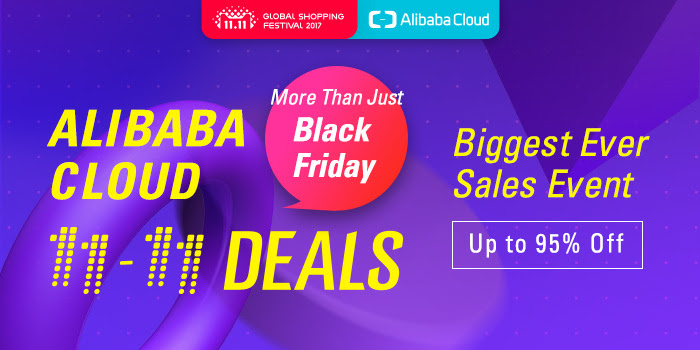 On our website today I saw an advertisement for Aliyun, Chinese retail major Alibaba’s cloud computing arm, also known as AliCloud or simply Alibaba Cloud. And what I saw, I could hardly believe. Alibaba is currently running a promo called 11-11 Cloud Deals that they’re calling “Our biggest ever sales event” and runs through – you guessed it – November 11, 2017.

Some of the deals are ridiculously attractive, and the promo boasts discounts of up to 95%. How about a domain name for 17 cents a year? Or a web hosting package for a single website for $1.81 a month? Or a dollar for hosting one website with 30 alias domains for 99 cents a month?

Alibaba is also running deals on SSD cloud server with data transfer packages, China server packages and cloud database server for MySQL packages during the promotional period. Mainland China servers are available to rent from as little as $3 a month for 2-core CPUs with 40GB SSD cloud disks and DDR4 memory of 4GB.

Why is Alibaba offering such ridiculously low prices? It’s simple – customer acquisition. It seems like the company is putting everything under the Alibaba Cloud umbrella to make it simpler for potential clients to understand their offerings, and the deep-discounting is intended to make it hard for customers to resist.

Barely two months ago, Alibaba beat out Google to become the third largest cloud service provider in the world, and the new promotion is clearly intended to increase that gap even as companies like Google and Oracle push hard for new cloud infrastructure clients for their public, private and hybrid cloud models.

According to data from research firm Gartner, Amazon leads by a wide margin with 44.2% market share in Infrastructure as a Service (IaaS), followed by Microsoft with 7.1%, Alibaba with 3%, Google with 2.3% and Rackspace bringing in the rear of the Top Five with a close 2.2%.

The aggressive discounting is understandable. The company just had a blowout quarter, with its cloud computing segment nearly doubling over the prior period and reporting $437.5 million (2.98 billion yuan) in quarterly revenues. Alibaba’s cloud business is clearly on a roll, and if it can keep its lead over Google over the next several quarters, aggressive promotions like the 11-11 offer will only help them increase the gap with Google in a meaningful way.

Is Alibaba an Amazon Clone in China? Really?