Papa John’s is a major NFL sponsor and advertiser. Their CEO, John Schnatter, recently blamed the chain’s sluggish pizza sales on NFL players protesting by kneeling during the national anthem. During the third quarter earnings on November 1, he said “NFL leadership has hurt Papa John’s shareholders” and that the protests “should have been nipped in the bud a year and a half ago.”

But it now looks like Papa John’s is having a change of heart. In a series of tweets on the company’s official Twitter page, Papa John’s apologized for its CEO’s comments. Here are the official tweeted statements:

“The statements made on our earnings call were describing the factors that impact our business and we sincerely apologize to anyone that thought they were divisive. That definitely was not our intention.”

“We believe in the right to protest inequality and support the players’ movement to create a new platform for change. We also believe together, as Americans, we should honor our anthem. There is a way to do both.”

And they even gave the middle finger to Neo-Nazi groups.

We will work with the players and league to find a positive way forward. Open to ideas from all. Except neo-nazis — ?those guys. (3/3)

“The bird” is clearly directed at Alt-Right groups. Early this month, white supremacist website, The Daily Stormer, asked in a photo tease if Papa John’s pizza was the official pie of the alt-right.

They even posted a picture of a pizza topped with a swastika of pepperoni slices, with a caption that read: “Papa John: Official pizza of the alt-right?”

Here is the Picture of the Pizza from Daily Stormer: 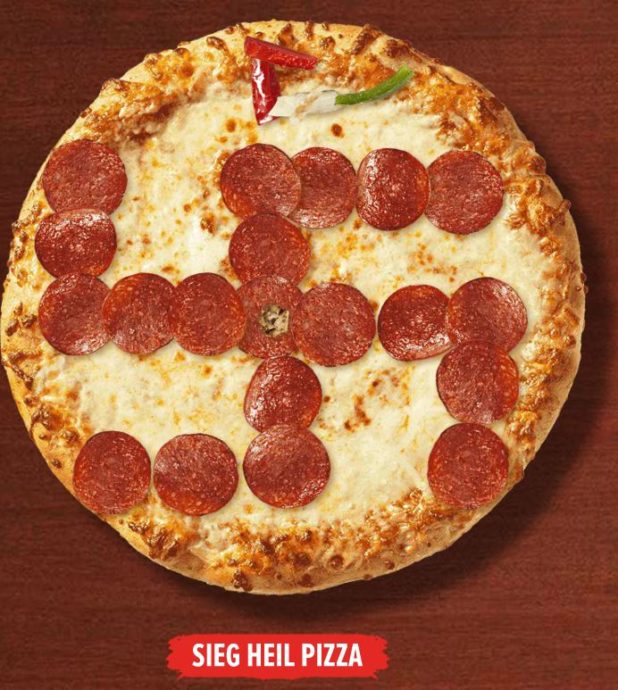 The Daily Stormer is yet to respond to the official middle finger from Papa John’s but, we are sure that they will retort at some point, and we’ll be there to dish it out piping hot from the oven – slice by slice, if we have to.