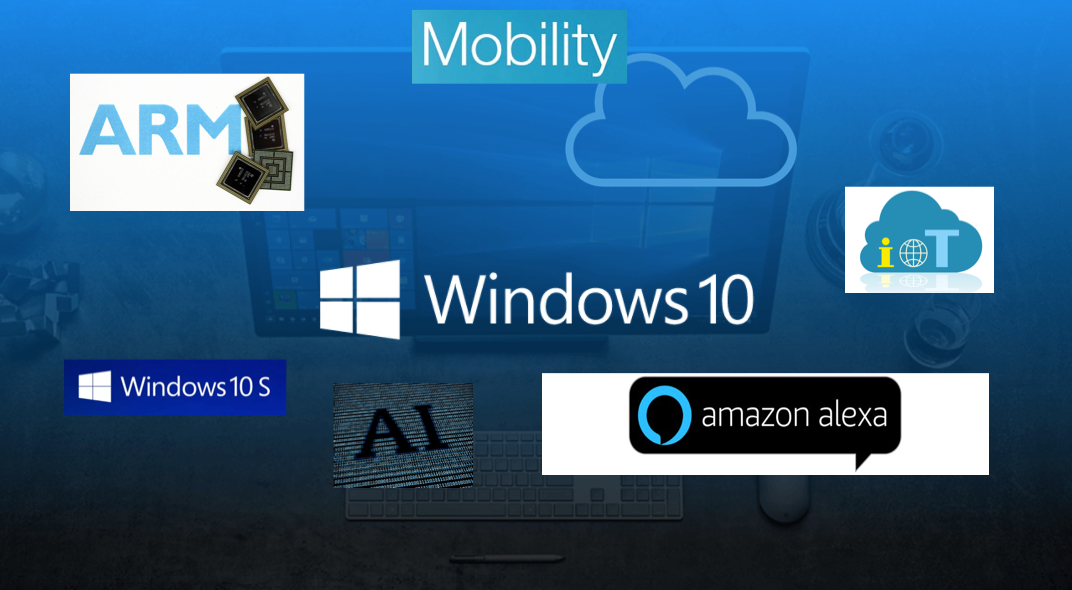 HP and Asus have already unveiled their Windows 10 S on ARM laptops, and it is now Lenovo’s turn to do the same with the Miix 630. In seemingly unrelated news, Amazon Alexa will be making her way to the Windows 10 environment, where her fierce rival Cortana already resides. How are these two developments linked? Let’s see.

First, the Lenovo laptop running Windows 10 on an ARM processor. The Miix 630 has an impressive battery life of 20 hours, thanks to the Snapdragon 835 processor. The official unveiling will happen this week at CES 2018, but most of the specs are already available: 4GB or 8GB RAM, memory options up to 256GB with microSD support, 12.3″ WUXGA+ screen and Windows Hello-compatible camera. But there’s just the one USB-C port so you can’t have peripherals and charge at the same time.

The 20 hours comes from the Qualcomm processor, as does native LTE support, and the Miix 630 will be running Windows 10 S with a full upgrade option to Windows 10 Pro using Microsoft’s emulator. That’s pretty much what HP and Asus are offering on their own Windows 10 S on ARM laptops that were revealed last month.

The next bit of news is Amazon Alexa, which is reportedly getting a brand new Alexa UWP app for Windows 10. Though this might not be what Microsoft had in mind, it’s what the OEMs want. All the top laptop makers – HP, Lenovo, Asus, and Acer – want to have Alexa on their 2018 laptops, and Amazon is more than happy to develop the app that will run Alexa on Windows. Microsoft isn’t complaining, and in this article we’ll see exactly why that’s the case.

To be clear, this is different from the plan that Amazon and Microsoft have of integrating Cortana and Alexa. That plan didn’t meet its deadline for the end of 2017, but should hopefully be fulfilled this year. Still it seems Amazon has decided to move forward on its own. Of course, Microsoft will need to approve the app for the Windows Store if Alexa needs to be on new Windows 10 S laptops, but we don’t seen any friction happening there.

Now, how do these two developments tie into each other?

For a long time, Microsoft has been calling the shots on OEM device specs. Since Windows is the preferred desktop OS around the globe, with an 88.9% market share, whatever features are supported by Windows is what OEMs can build their hardware around.

That’s changing in a big way. Thanks to the efforts of Microsoft’s iconic CEO Satya Nadella, Microsoft is no longer the dominating and closed-minded company it used to be. That openness has been seen many times over the past few years since he took over the helm, not the least of which is Microsoft embracing open source and becoming a platinum member of the Linux Foundation.

Relevant to this discussion, it has give OEMs more flexibility, even developing a light-weight version of its OS, which is what Windows 10 S is all about.

The other big shift is in the area of mobility. When Nadella first outlined his vision of mobile first, cloud first, most people thought he was referring to the company re-entering the mobile phone industry that it was unceremoniously kicked out of. Well, twice, but who’s counting?

And the embodiment of that effort was thought to be Surface Phone, which we’re all still awaiting with bated breath, by the way.

But what’s really happening here is more mobility for Windows 10, not necessarily a smartphone running Windows 10. There’s a big difference, and we’re only just seeing the fruits of Nadella’s strategy.

Mobility does not always equate to smartphones. That’s just one form of mobility. Mobility essentially means being able to compute on the go.

One aspect of that mobility is light-weight and versatile devices that do whatever a smartphone is “expected” to do, but take that to a new level by bringing the desktop experience into your hand as well.

That’s where Windows 10 S on ARM comes in. That’s also where Surface Phone will ultimately play its lead role in this gripping drama.

The second aspect of that mobility is “anywhere access”, courtesy Microsoft’s Azure, Office 365, Azure Stack and the whole cloud experience. Microsoft isn’t particular about how cloud is deployed, as long as people are using it across its entire product and service line.

The third angle is artificial intelligence, or AI. What AI brings to the mix is the usability factor of greater mobility. That’s why the decision to integrate Cortana with Alexa, the latter of which holds a chunk of the share in the $1.1 billion intelligent virtual assistant (IVA) market, is a wise decision from both companies’ perspectives. That market is expected to expand to $7.9 billion by the end of 2024, and two big names joining hands is going to rake in a huge portion of that nearly $8 billion, not to mention the added advantage of keeping Google at bay.

Also relevant to that strategy is bringing Alexa into Windows 10 through OEMs. It might not be Microsoft’s idea, but that doesn’t mean the company is against it.

You might be surprised, but Cortana is not Microsoft’s main objective for AI: the real objective is to make Windows more versatile and have it mounted on as many devices as possible. There are roughly two billion desktops active in the world today, and much of that is held by Windows. So why not allow an IVA like Alexa into its ecosystem and leverage Amazon’s efforts for mutual benefit?

One other aspect of that mobility is IoT, which includes connected cars, connected homes and so on. With Amazon fully committed to this space, you can see why Microsoft would benefit hugely from having Alexa on Windows 10.

So, with this multi-pronged approach to mobility, Microsoft is essentially saying that it wants Windows to be absolutely everywhere – on your desktop, in your hand, at your voice command, in your car, in your home and anywhere else you can think of.

And the target of this grand plan is not the average user, surprisingly, although that’s a massive bonus on its own. No, the real target of the mobility plan is the enterprise segment.

I’ve talked about this extensively in earlier articles, but to summarize, the enterprise segment is Microsoft’s most important gateway to the broader consumer market. If the majority of enterprises run one particular application, you can bet that the majority of households use that application on at least one of their home devices, whether desktop or mobile. That’s because households are merely an extension of the workforce.

Say what? Let me explain.

For example, if you work in an office that has only Mac desktops, you’ll notice that most of the employees will have personal devices that are either macOS or iOS. Everybody takes their work home with them nowadays, so it’s not surprising that they’d want to have compatible hardware at home. If your company uses open source applications, you’ll most likely have those same applications on your personal device as well.

And that hypothesis extends to almost every work-related application in the world. If you’re using Chrome in the office, you’re very likely to be more comfortable with Chrome at home. Of course, it’s not a rule, and there will be exceptions, but you can see why such a trend might be a reasonable thing to assume.

And that’s where Microsoft is hitting. If it can make devices that are ultra-mobile, and have all the bells and whistles like Alexa on Windows 10, it’s the enterprise segment that they want adopting that technology, whether it’s hardware or software or cloud. Because if the world’s companies use Microsoft’s products, so will the world’s employees.

Now the strategy is much clearer because everything Microsoft has done over the past four years since Nadella took over point to that one strategy: mobility across devices, across platforms and across geographies. In other words, mobile first, cloud first.

I believe Microsoft’s strategy is to eventually bring full mobility to Windows 10, whether that’s by using ARM processors, introducing a Surface Phone capable of running desktop applications, infusing AI capability into every application it makes, shaking hands with Amazon to get a foot into the connected home market or deploying hybrid cloud solutions to help companies leverage their existing infrastructure.

Of the two key product lines, Windows and Office, the latter has almost achieved full mobility. It is device-agnostic, platform-agnostic and location-agnostic. Windows hasn’t gotten there yet, but that’s the plan.

Once both these product groups fully blur the lines within the business and personal computing segments, no company will be able to match Microsoft’s versatility in this space. And that dominance will essentially be extending Windows’ all-pervasive nature by injecting it with a booster shot of mobility.

Windows 10, Surface devices, ARM, enterprise applications like Office 365 and Dynamics 365, Azure, Cortana and other products are merely the bits and pieces that will eventually make up Microsoft’s mobility ecosystem.

When the stars are all aligned, Microsoft will emerge as the only reasonable choice for the forward-looking enterprise – and individual – of tomorrow.