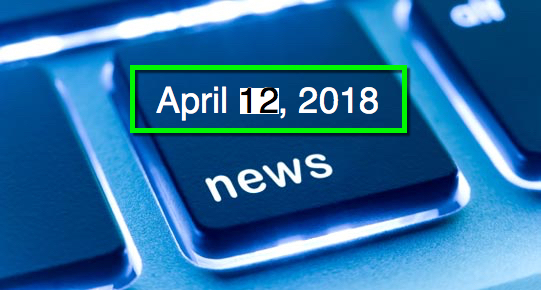 Here are the top global news stories and important business and technology news for today, April 12, 2018.

A fact-finding mission by the Organization for the Prohibition of Chemical Weapons is underway. Officials are headed to Syria to investigate the alleged chemical attack in Douma last weekend.

Everyone knows Karen McDougal, the Playboy Playmate that was paid $150,000 to keep quiet about her alleged affair with Trump. This time, the same parent company of the National Enquirer – American Media Inc. – is believed to have paid a doorman, Dino Sajudin, $30,000 nearly eight months before the McDougal incident, as part of a contract with Sajudin to hide a rumor he’d heard that Trump fathered a child with an employee of Trump World Tower.

The Governor of Missouri has been accused of making unwanted sexual advances to his hairdresser, according to a report published by an oversight committee on Wednesday. In February, Greitens was arrested and indicted by a grand jury for taking a nude or partially nude photo and making it available electronically. Wednesday’s findings corroborated the hairdresser’s allegations that Greitens threatened to release the photo if she disclosed what happened at his home during the encounter.

After investigators of the Organization for the Prohibition of Chemical Weapons found that double agent Sergei Skripal and his daughter were indeed poisoned by a military-grade nerve agent, Russia has come out saying it will not accept any conclusion without bring granted full access to the evidence. Though the organization’s findings corroborated the accusations of the British government that Russia was responsible for the incident, the latter is now counter-accusing Britain of “waging a defamation campaign against Russia, manipulating public opinion and hiding facts.”

There was some hesitance in the U.S. Court of Appeals for the D.C. Circuit as two of three judges indicated that Mick Mulvaney could not remain as temporary head of the Consumer Financial Protection Bureau because of the 2010 law that created the bureau. The law precluded the White House Office of Management and Budget from overseeing or having jurisdiction over the bureau. However, Leandra English may not get to keep the position, either. Speculation is that Trump will simply appoint someone else to take the embattled position vacated by Richard Cordray, or his administration may appeal the decision to the full appeals court.

16 Sears Outlets Being Auctioned on the Internet

Cushman & Wakefield, a commercial real estate services company, is teaming up with an online bidding platform called Real Insight Marketplace to auction off 16 Sears retail outlets across five states. Bids are due by May 1, and more than 200 investment entities have already expressed their interest in joining the action. Sears could sell of as many as 140 properties, with about 100 due for this month.

A Safety Center landing page has been added to the Uber app. The page contains several new safety and security features for riders, and there is now a direct dial button for calling 911 – you know, just in case you don’t know how to do that on your phone. Read more…

Gmail is reportedly going to get a new look, and leaked screenshots of the brand new UI have been making the rounds. The news originally went from Google to G Suite administrators mentioning a “fresh, clean look.” Here are some of the leaked photos at The Verge.