How many Model 3 will Tesla build this week?

That’s the million dollar question that no one can answer. Nope. Not even Tesla. But that’s also because Tesla has been steadily improving its production capacity.

Since the day Model 3 was launched in July 2017, Tesla has struggled to match up to its own lofty production goals. But it looks like things are slowly falling in place for the electric car maker as Model 3’s VIN registrations have spiked sharply in the last two months.

VIN is a leading indicator. Car makers will have to anticipate their production capacity and accordingly register the VINs. If they are going to build 1000 cars in the following week, they will register well above that mark as they have assign it to cars before they enter the assembly line.

Due to this, we need to look at the pace of VIN registration to guesstimate production, instead of just looking at total monthly registration figures. 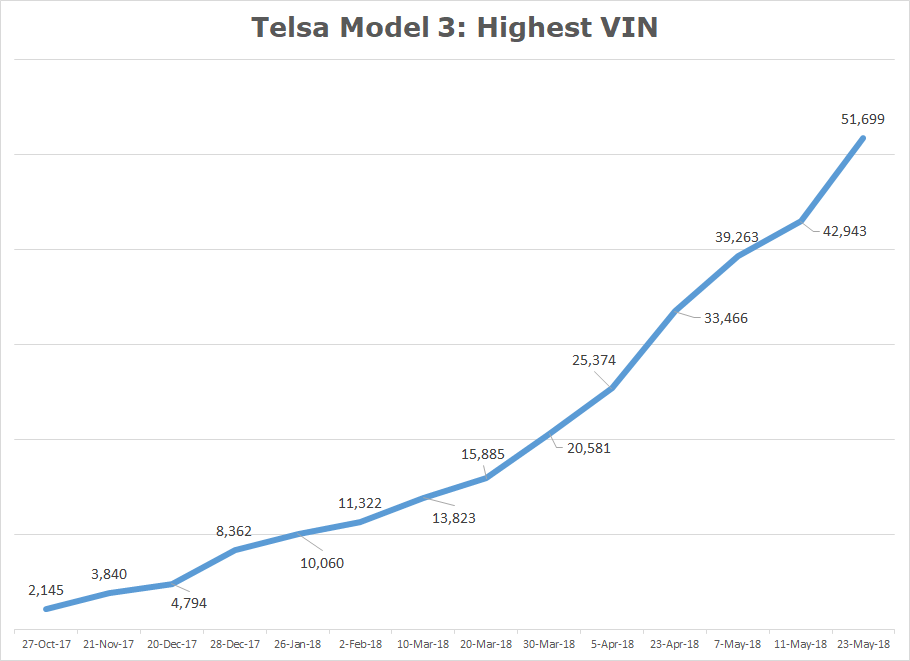 Data from Model3VINs show that Model 3 VIN registration pace has considerably accelerated in the last few months. The two production shutdowns in February and April this year must have played a huge helping hand in fixing the bottlenecks.

Between November 2017 and January 2018, Tesla registered less than (approx.) 10k VIN’s, a feat that they then repeated in just February and March. Another 13K VINs were registered in the first 23 days of April, while another 18k were added in the last 30 days.

Bloomberg reported that Tesla skipped nearly 2,000 VIN’s in its production sequence. Even if we discount it, it still leaves 16k registrations in the last 30 days.