Cobalt is expensive, and if Tesla Motors CEO Elon Musk had his way there would be absolutely no cobalt in the Lithium-Ion cells currently used for the Model 3 and earlier Tesla EVs. Unfortunately, even Tesla is dependent on this precious commodity, which has shot up in value from under $15,000 per metric tonne in June 2016 to more than $86,000 per metric tonne as of June 2018. Naturally, this has a direct impact on EV battery cost.

The Panasonic-Tesla partnership will play a big role in cutting Cobalt from the Li-Ion equation. Newer Tesla batteries already show a 60% lower Cobalt content than traditional Li-Ion cells used by other EV makers. And this could go down even further as both Tesla and Panasonic push for lower Cobalt in their batteries.

Why is this critical?

Since Lithium is relatively inexpensive at $12,000 per metric tonne, Cobalt is a significant contributor to the overall cost of a battery pack. And the cost is expected to come down to below $9,000 per metric tonne by the end of this year, and stay there for a few years. That’s good news for battery makers and buyers, but not that great for investors in the metal and its derivatives. 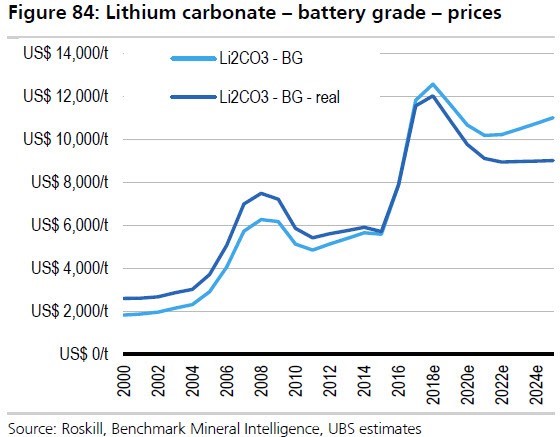 That’s why Tesla and Panasonic are continually looking at ways to reduce Cobalt usage in their batteries. According to UBS, 2018 is the year that we will reach price parity on EV batteries, as shown in the graph below: 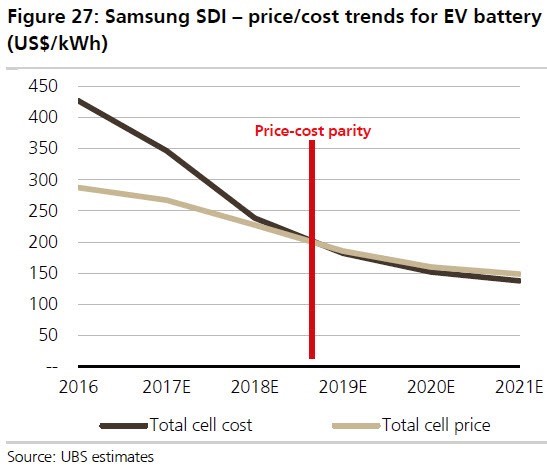 And if Tesla and Panasonic are able to further reduce the dependence on Cobalt, they could very well bring their EV battery cost down to below $100/kWh in the next couple of years or less. That would make mass-production EVs like the Model 3 much more viable, and open the floodgates to even cheaper mass-production models in the future. That would give Tesla a huge first-mover advantage in the economy EV space for ranges in excess of 200 and 300 miles, and other players like GM and Ford will be spending years playing catch-up.