Tesla does not release regional sales figures. But that’s not going to stop us from giving it a shot, isn’t it. So here it is,  a compilation of data from various third party sources lavishly garnished with guesswork.

Tesla Sales in the United States

The automaker wasn’t able to maintain the insane growth rate in 2017, but the company confirmed today that it still managed to double sales in China to over $2 billion in 2017. They don’t confirm the number of cars sold per market, but it has to represent over 20,000 vehicles based on their average sale price. – Electrek

Norway: The Nordic nation briefly lost its third largest market for Tesla tag to the Netherlands in July and August. Tesla sold 838 Model S and X in the Netherlands, way higher than the 295 units the company sold in Norway.

If Tesla manages to repeat its 2017 fourth-quarter performance, the company will still end up reporting growth in Norway this year, as the company has now sold 6,321 units in the first three-quarters of 2018 compared to 4,719 units the company sold during the same period last year. 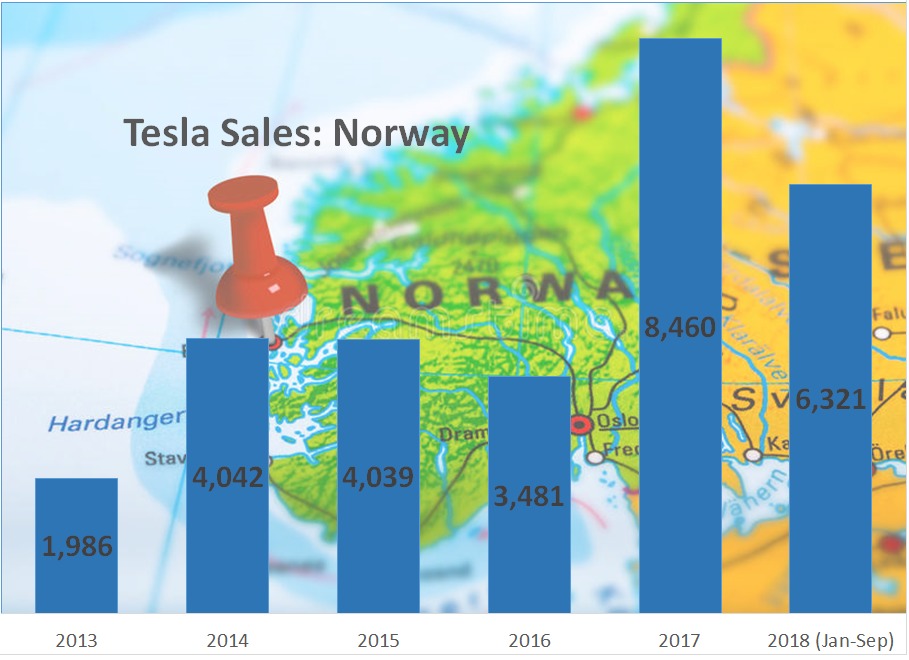 Netherlands: The Western European nation with a population of 17.2 million become the third largest market for Tesla in July.

The electric car maker has sold 5,291 Model S and Model X in the Netherlands this year (January 2018 to September 2018), which is nearly three times the 1,896 units the company sold during the same period last year.

US, China and Norway accounted for nearly 73% of Tesla’s sales in 2017. Model 3 deliveries will not change the equation in 2018 as most deliveries are expected to happen in United States.

I am struggling to get any data on Mexico sales. If you have a source, please share it with me. Thanks

*Australia figures are explained in this article