The EV market in Australia is still in its early stages of growth. Just 0.1% of all new car sales in 2017 and 2016 were electric. That translates to 1000 cars in an auto market that’s worth more than a million units annually.

Total EV sales since 2010, ­including estimates for Tesla, suggest that in a total passenger fleet of 14 million there are 8000 EVs on Australian roads, equivalent to one in every 1750 cars. – The Australian

Thanks to Tesla’s policy of not disclosing regional sales figures, we have no choice but  to rely on third party sources and guesswork to track Tesla’s growth in Australia. 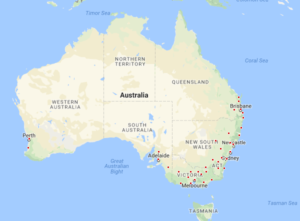 One look at supercharger density will tell you how “not so serious” Tesla is about Australia.

Tesla has just six stores in a country with 24 million people and an auto market worth more than a million vehicles in annual sales.

But despite the infrastructural lag, Australia has shown its appetite for Tesla cars by helping the car maker triple its revenue in 2017.

Despite Tesla being a member of the Federal Chamber of Automotive Industries, Tesla does not provide monthly sales statistics, making it difficult to determine the exact number of electric vehicles sold in Australia.

However, a recall for both the Model S and Model X last year gave us a good guide at how many units the American manufacturer sells in Australia. Tesla’s recall notice showed a fix needed to be applied to 469 Model X SUVs, and 324 Model S sedans.The 793 cars were all built between February and October 2016. Averaged out across a full 12 months and it can be estimated Tesla sells around 1060 cars a year.

In 2017, Tesla’s (Parent company) Automotive sales accounted for 72% of the company’s overall revenue, the rest coming from leasing, services, energy and storage segments.

Tesla sells Model S and Model X in Australia. If we assume the average price to be around $100k, then Tesla must have sold around 1,150 units (Australia) in 2017, which is closer to Mr. Kirby’s calculations.