That’s because I have not given you a time frame. All I have to do is wait for Tesla to release its official figures and then give you the time period for my calculations.

Unfortunately, that is what this article does, talks about production numbers without any date attached to it.

Let us dig into numbers.

“It’s getting very exciting! All parts of the Model 3 production system are now above 500 and some are almost at 700 cars already. Congratulations to all on making so much progress!”

If all parts of Model 3 production are above 500, Tesla should be making at least 3,500 cars per week. Elon is certainly not going to go out of his way to hide the truth to his employees.

But Vins cannot be a definitive source for production numbers because auto companies anticipate production, register VINs in batches and they can register as many as they want.

So let us take Model3Vins (end of march) numbers and compare it with Tesla’s official figures for the first quarter. 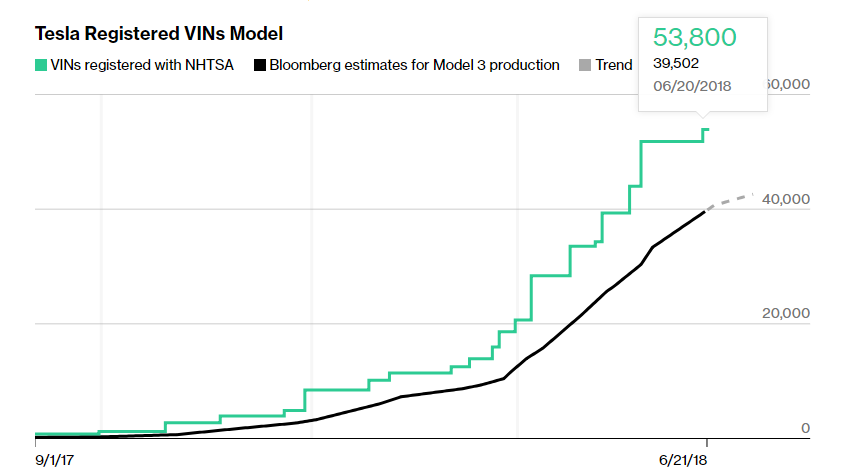 Now Bloomberg is projecting Tesla to hit Model 3 production of more than 4000 per week within the next couple of weeks.

The problem we are facing is, when ever Tesla talks about weekly production figures most of us immediately assume that’s the least Tesla will produce every week in the future. But unfortunately, Tesla will have to slow things down or even shut down the assembly line to improve production.

It will bring down the overall numbers. But that’s the only way to increase production. What we need to be looking at is “sustained” production rate.

How did I arrive at my guesstimates?

During the fourth quarter Tesla reported that they made 793 Model 3s in the last seven working days of the quarter, 113 units per day during the week . Multiply that by 90 days, you get 10,170 units. Very close to the 9,766 units produced in the first quarter.

Let us use the same logic that we used for first quarter production.

Tesla reported that they produced 2,020 during the last week of march or 288 units per day during the week . Multiply that by 90, you get 25,965 units. That’s the minimum Tesla can hit during the second quarter.

But Tesla added another Model 3 production shift in April and started round the clock production, which will help their numbers increase further.

So reaching 30,000 Model 3s for the second quarter is in the bag for Tesla. We just have two more weeks to see how close my numbers are.

Why Germany is the Best Choice in Europe for Tesla Gigafactory?

Will Tesla’s Next Gigafactory be in China?