Home News Tesla Model 3 Production Peaks: Short Burn of the Century is One... 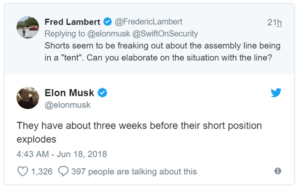 Elon Musk warned Tesla shorts last month that the short burn of the century is around the corner. New data collected by Bloomberg show that Tesla’s weekly Model 3 production rate is about to hit 4,500.

“New data coming in during the last 24 hours has boosted Tesla’s weekly production rate to about 4,500 in the Bloomberg Tracker’s Trend forecast for next week,” wrote Tom Randall, Senior reporter at Bloomberg.

Bloomberg has been tracking Model 3 production for the past several months. They have built a mathematical model to estimate weekly Model 3 output using VINs that Tesla registers with U.S. safety regulators.

Bloomberg model has been very accurate in the past

As of this week, Bloomberg is estimating Tesla’s Model 3 production rate to be at 3,398 per week and expects Tesla to hit 4,500 next week. If Tesla burns the “midnight oil to burn the midnight oil“, a burst production of 5,000 Model 3s in seven days seems to be very close to reality. Or at the very least Tesla will get closer to that magic number.

And that makes the short burn of the century a real possibility. The shorts still have more than $12 billion riding against Tesla, a short interest of more than 35 million shares at the current rate.

$TSLA shorts are up $524 million in mark-to-market profits today on a down 4.1% trading day. @tesla shorts cut 22% off their year-to-date losses and the $12.9 billion of shorts are down “only” $1.83 billion for the year. There was over $100 million of new short selling today. pic.twitter.com/f7kXlgttjk

So far, the short burn of the century belongs to VW shorts. Back in 2008, Volkswagen briefly became the world’s largest company by market capitalization as panic stricken short sellers rushed to cover their position, driving VW shares up by 93%.

Will Tesla beat VW next week?

CNBC confirmed Bloomberg estimates to be closer to reality.

“The company (Tesla) is running two 12-hour shifts per day every day this week on the Model 3, the two workers who provided the production figures said. If the company produces 300 Model 3 vehicles during all 14 shifts, it would produce 4,200 cars for the week.” – CNBC

CNBC is saying that Tesla’s burst production is already at 4,200 Model 3s per week rate, while Bloomberg is projecting 4,500 for the next week.