There is small list of line items Wall Street will never talk about when discussing Tesla –  Valuation of Tesla’s Autopilot is one of them. Not just Tesla, Wall Street is indifferent to GM’s self-driving capabilities as well.

According to Bank of America analyst Justin Post, Waymo is worth $41 billion. “While still early to determine true Waymo earnings potential, we established a potential $41 billion valuation in our recent sum-of-the-parts analysis based on a ride-sharing business and tech licensing model” – Justin Post, BOA

In May last year Morgan Stanley analyst Brian Nowak told investors that Waymo, the autonomous driving unit of Alphabet is a potential spin of candidate worth $70 billion to $140 billion.

“If we assume that Waymo can grow to ~1% of global miles driven by 2030 (based on a fleet of ~3mn cars each driving ~65k miles/year) and that Waymo can generate on average ~$1.25 in revenue per mile driven, it implies a ~$70bn Waymo enterprise value. More miles/year and revenue/mile could lead to an enterprise value of ~$140bn.” – Brian Nowak, UBS

Why AI Powered Self-Driving Tech will Cause so much Chaos?

If self-driving cars become a reality, the need for personal car ownership will plunge. When you can summon your ride by simply pressing a button, what will be the need to own a car?

Ride hailing apps exist even today, but they are still expensive to be used full time – making personal car ownership a better proposition for regular drivers. But that will change when cars get their own driving license. It will remove the driver out of the equation and with the highest recurring expense out of the way, cost of running a taxi will plunge – making ride hailing far cheaper than direct ownership of cars.

That’s why there is an arms race between companies like Google, Apple,Uber, Tesla, GM, Daimler, VW to build their own autonomous tech. Chip manufacturers like Intel and Nvidia are playing their part too.

How did Waymo make it to the Top?

Of all the moon shot projects Google’s parent Alphabet engaged in, Waymo has turned out to be the best bet. It’s a tech driven project, right up Google’s alley, with potential to disrupt the global automotive industry.

Google was there long before auto companies realized the potential of self-driving tech. 2019 will be the tenth year anniversary of Google’s self-driving car project. 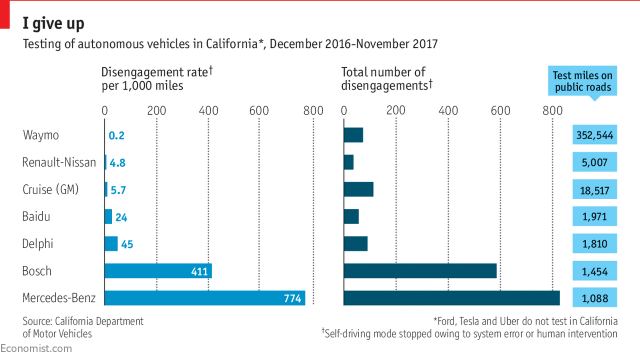 “When an AV gets confused and does not know how to respond, or makes the wrong decision, the safety engineer in the driving seat takes over. This is known as a “disengagement”, and the number of disengagements per 1,000 miles travelled provides a crude measure of how the companies developing AVs compare” – Economist

As you can see from the chart above, Waymo’s disengagement rate is extremely low when compared to its competition. Waymo reads the environment better than others and as a result it responds better.

A 2015 court filing in Waymo’s lawsuit against Uber revealed that Google spent $1.1 billion between 2009 and 2015 to develop its self-driving tech.

Simply put, Google’s self driving technology is far evolved due to years of testing experience behind them. They invested their time, money and energy into the project and they could soon end up reaping the rewards.

Why not talk about Tesla Auto Pilot and GM’s Self-Driving Tech?

One explanation for the bizarre trend is the market does not think Tesla Autopilot is worth the discussion.

Since 2015, Navigant – a consulting group based in Chicago has been tracking self-driving technology companies. According to them Tesla Autopilot is not even a contender in the self-driving car race and ranked them last in their study.

But even Navigant thinks GM’s strategy and execution is better than its peers, but no one in Wall Street talks about it. At least not in a way that can change GM’s valuation.

Unlike other automakers, who think LiDAR – a light detection and ranging sensor as the holy grail of self-driving tech, Tesla thinks LiDAR is not worth its money.

“In my view, it’s a crutch (LiDAR) that will drive companies to a local maximum that they will find very hard to get out of,” Tesla CEO Elon Musk said. He added, “Perhaps I am wrong, and I will look like a fool. But I am quite certain that I am not.”

LiDAR is expensive and its heavy. 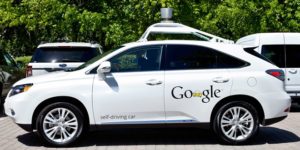 According to ExtremeTech, Google’s driverless cars carried around $150,000 worth of equipment and the Velodyne LiDAR system alone costs upwards of $70,000.  And it looks like this.

How many self-driving cars will be built in a year if the hardware alone costs in the hundreds of thousands. And that’s just the hardware we are talking about. When we add IT infrastructure and the AI power required to crunch the gigabytes of data a self-driving fleet can spit out every second, the cost of the project will go through the roof.

Manufacturing in scale will reduce the cost of these systems over time and aesthetics can be improved too. But how long will it take?

We have a great example in the form of Solar PV industry. How many decades it has been since Solar came into the picture? Costs have plunged over the years, but it will take many more years before Solar PV completely displaces fossil fuel based power generation systems.

I am not saying that cost will be a huge hindrance to the success of self-driving tech. But I am certain that the technology is going to need many more years before it can make its way to the mass market.

Tesla decided early on that its not going to follow the conventional wisdom when it comes to self-driving technology.

Russ Mitchell of Los Angeles Times writes “Today, the highest-end automotive lidar systems available cost $75,000, made by a company named Velodyne.” He added, ” Lidar is only one of several sensor systems that make up the robot system in a driverless car. Each has strengths and weaknesses. Video cameras and radar units are relatively cheap, but don’t see the world with the detail of a lidar system. Lidar has problems with rain, snow and fog, because the beams can bounce off snowflakes and water droplets.”

For Tesla, LiDAR is way too ugly and way too expensive for what it offered.

The success of Waymo, Uber and GM’s self-driving tech will rely on how low they can push hardware costs, especially LiDAR. Tesla thinks LiDAR is not worth the trouble and it can do the same with its neural net powered by data from 360-degree cameras, sensors, sonar and radar systems.

There are three scenarios that can play out over the next few years.

A complete failure of the Tesla’s self-driving technology will be impossible because Tesla will keep improving its technology version by version. But what’s possible is, competition may develop a technology that is far superior to what Tesla has. But if Tesla’s competition gets its right, then the cost of self-driving hardware has to decline sharply.

Tesla can accept its failure and enhance its tech by incorporating the best ideas available in the market.  Tesla needs to do a Samsung on iPhone. Just follow the leader every step of the way. It will be a setback for sure, but getting backup is not going to be hard.

Scenario 2: Tesla get’s it right. Competition struggles to bring down the cost.

This is the best possible scenario for Tesla as it gives them plenty of time to further cement their lead and make Autopilot its biggest selling point. Tesla’s self-driving fleet will spawn all over the world. Demand for Tesla cars go through the roof dragging the company’s valuation along.

Scenario 3: Both Tesla and the Competition Succeed

Tesla will still have a slight edge over self-driving tech developed by non-auto companies.

“People who are really serious about software should make their own hardware”. – Alan Kay

This is the reason why Apple is so successful while its competition keeps failing to catch up with them. Apple builds its own hardware and software. No other company comes anywhere closer to match Apple’s expertise in merging these two fields into one.

Tesla is indeed risking its (innovative) reputation by taking the unconventional path. Their effort could fail miserably. But you are never a disruptor – if you fear failure.

“Unlike almost any other chief executive, Amazon’s founder, Jeff Bezos, has built his company by embracing risk, ignoring obvious moves and imagining what customers want next — even before they know it.

Key to that strategy is his approach to failure.

While other companies dread making colossal mistakes, Bezos seems just not to care. Losing millions of dollars for some reason doesn’t sting. Only success counts. That breeds a fiercely experimental culture that is disrupting entertainment, technology and, especially, retail.” David Streitfeld, The New York Times

What is LiDAR? How does it work?