Each truckload of Tesla removes the need for one truckload of fuel delivered to a gas station, wrote reddit user shanereaves.

Shanereaves explained his thoughts further. He added “Now this doesn’t mean completely… Due to not all delivered vehicles using the same station,but picture this. According to statistics the average American buys 656 gallons of fuel every year. A tanker carries 9000 gallons of gasoline.

Each Tesla carrier hauls 9 vehicles. So for every car carrier of Teslas that almost equates to one less semi of fuel delivered throughout the country.

Based on almost a thousand Teslas being manufactured daily meaning around 100 car carriers leaving the factory, THAT EQUATES TO ABOUT 100 SEMIS OF FUEL NOT NEEDED IN THE US EVERY SINGLE DAY.?????”

It is indeed a ‘picture’ that can stun anyone. Now think of the effect it will have on companies that sell hundreds of thousands of gallons everyday – not a pretty picture to look at.

Let us try and build on Shanereaves’ thoughts.

According to U.S. Energy Information Administration (EIA), Americans consumed  about 142.85 billion gallons of gasoline in 2017, an average of about 391.40 million gallons every day. In 2013, there were 212 million licensed drivers in United States, which grew to 222 million by 2016. 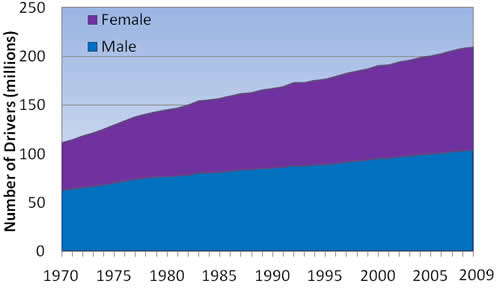 “An American commercial car carrier typically fits between 5 and 9 cars, depending on the car size and trailer model.

Large trucks typically have capacities ranging from 5,500 to 11,600 US gallons”. – Wikipedia

Using Shanereaves’ words,  for every two truckload of Teslas (18 cars) equates to atleast one less semi of fuel delivered throughout the country.

The numbers are staggering because Tesla has already delivered 200,000 cars in United States and current max production rate is closer to 7000 cars per week or 1000 cars per day. (Model S, X and 3).

Note: The core idea of the article belongs to shanereaves. I just expanded it with some additional data points after he granted me permission to build on it.