Two days from now, on August 15, 2018, more than two years after they plunked down $1,500 towards a Tesla Model 3 reservation, New Zealanders will get their first at-home, first-hand glimpse of the EV that is turning the global electric vehicle market upside down. Their neighbors, the Aussies, will get that privilege a few days later, starting August 21.

This is an extract from the formal invitation to Australian reservation holders sent earlier today. 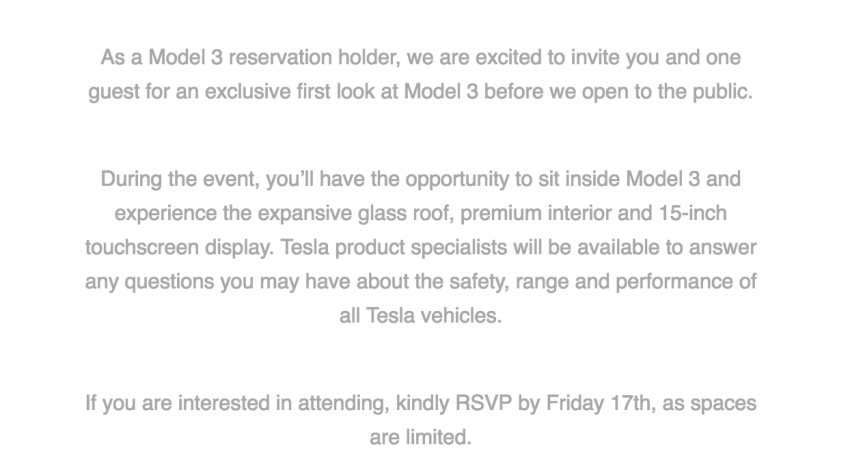 Obviously, Tesla isn’t going to make this exclusive to those who hold reservations, but they’re getting the first view before everyone else. And the company didn’t specify a time, either.

“There are no set appointment times, please join the queue when you arrive”

That’s no surprise. On March 31, 2016, when the Model 3 was first opened up to reservations, this is what the Australia showroom looked like:

Now that’s it’s nearly two and a half years after that iPhone-launch-day-like queue was formed, interest levels are going to be even higher as reservation holders and the general public drool over the opportunity to finally sit in one…even if it’s just for a few seconds.

There’s no firm production or delivery date for the Australian or New Zealand market, and it could be a while before the first deliveries land. Nevertheless, it’s interesting to see the effect that an iconic automobile like the Model 3 has on people even though they won’t get their orders until sometime next year.

But not everyone’s in a good mood about the Model 3, especially in Australia. Some of them even jokingly refer to the Model 3 delivery timelines as “Elon time”. And there are reports and rumors about significant cancellations as well.

All that is to be expected. Inordinate delays hobbled Model 3 production during the early stages. ‘Overautomation’ and multiple bottlenecks were the order of the day just a few months ago. Today, many of those issues have been addressed, the company has hit its self-set target of producing 5,000 cars a week, and production seems to be settling down into a nice upward cadence.

But none of that matters to Australians, who still have to wait a year (or more?) for their cars to be delivered. That could change now that Musk has finally revealed that it is, indeed, the Saudi Public Investment Fund from whom he got “funding secured.” The PIF has money muscle and long-term goals, having already committed to a $45 billion investment in SoftBank’s Vision Fund over a five-year period. Any capital injection in addition to what they’d pay to buy out existing investors looking to cash out will most likely be used to speed up Model 3 production in any way possible.

Why does Tesla need to meet its reservation commitments as quickly as possible? Apart from the obvious reasons, Tesla needs to become profitable over the next two quarters. We’re already in the middle of Q3-18, and Tesla has been guiding for positive cash flow over Q3 and Q4 from the start of the year. This is crunch time if ever there was one.

The Saudis stepping in to help take Tesla private will now shut the mouths of any naysayer who continues to talk about a Tesla bankruptcy. And, according to Musk’s blog post earlier today, it’s the Saudis who have been pushing for this deal. And not just any PIF representative – it’s the Chief Executive, Managing Director and Secretary-General of the Board himself, Mr. Yasir bin Othman Al-Rumayyan.

There will certainly be a long wait time for Tesla Model 3 reservation holders in countries like Australia and the UK, which require a right-hand drive model. We don’t even know if Tesla has a platform yet for it, but Musk’s words on that were:

Probably mid next year before we are able to make RHD. Wish it could be sooner. Maybe try a Model S, used or new in the meantime? Used S is better than a new 3 imo, unless you want a smaller car.

Tesla, Elon Musk and the Breadcrumbs We Failed to Follow