If you want to look at how something is going to grow in the future, it often helps if you look at its evolutionary past. Sometimes, it even helps to look at how things are now. In the realm of self-driving technology, things don’t appear to be that way.

If you drop by often to 1redDrop.com, you may have seen a piece I did last week about how advanced driver assistance systems are not automated driving systems. I encourage you to quickly skim through that when you have a minute or three.

Click the Link to Read Why “Advanced Driver Assistance Systems (ADAS) are NOT Self-driving, Even on a Tesla“

ADS is what Google’s Waymo and Tesla’s Autopilot are trying to achieve. ADAS was the previous generation. The problem is, there’s no filial affection from one to the other. ADS has no fatherly or motherly love for ADAS because the older generation of semi-automated driving systems is meant to help the driver, not replace her.

That’s the key difference between the two, and the reason why there’s such confusion. In a recent series of tests by the Insurance Institute for Highway Safety (IIHS) using 5 cars, including two Teslas, it came out that the Model S (Autopilot 7.1) and Model 3 (Autopilot 8.1) failed the automatic emergency braking (AEB) test but did better than the BMW 5-Series, Mercedes E-Class and Volvo S90 when adaptive cruise control (ACC) was on.

Musk tweeted a couple of months ago that Autopilot 9.0 would “begin to enable full self-driving features”. There were stark differences in the tests between the Model S that had the older version of Autopilot and the Model 3 with version 8.1, but we’re a little skeptical about “full self-driving features.” It’s logical that v9.0 will be better than its predecessor, but don’t expect it to be SAE Level 5 autonomous. Last week it rolled out a 14-day free trial for ‘Enhanced Autopilot’; but it did so with this caveat:

“Please only enable these features if you will pay attention to the road, keep your hands on the steering wheel, and be prepared to take over at all times.”

To be fair, none of the Autopilot modules claim to be the same as self-driving capability, even though Musk does. In fact, Tesla even spells this out on its support page:

“Before using Enhanced Autopilot, please read your Owner’s Manual for instructions and more safety information. Autosteer is a driver assistance feature and does not make your car autonomous. Please use it only if you will pay attention to the road, keep your hands on the steering wheel, and be prepared to take over at any time. Autosteer is designed for use on highways that have a center divider, clear lane markings and no cross-traffic. It should not be used on highways that have very sharp turns or lane markings that are absent, faded, or ambiguous.”

That’s where the confusion arises. We marked that line in the section above in red because, come on, how many people actually read their Owner’s Manual before driving their car? True, first-time Tesla owners might be more likely to skim through it than buyers of other cars, but that tends to be because it’s an EV, not specifically to read up on Autopilot.

The point I’m trying to make is that autonomous driving technology isn’t here yet, but people tend to assume that ADAS is merely the step before self-driving tech – it’s parent. It’s not, and it was never meant to be. I mentioned earlier that ADAS is designed to help the driver; ADS is meant to replace her. I’m saying it again because that’s such an important concept but it slips through the cracks every time.

The tests conducted by the IIHS didn’t allow the driver to jump in when required; it merely assumed that the ADAS component in question could take care of everything. It can’t. The only thing the tests prove is that ADAS is not the same as ADS.

By contrast, Waymo tests its technology aggressively but is still not ready to release it to the world as a fully autonomous product. Did you know they drove 2.7 billion test miles last year alone – and that’s just in simulation runs? Real-life road tests have only been done for about 8 million miles as of July 2018. They’re still not ready.

So why give a Grade 8 student a test meant for a Ph.D. student and then write about how badly she performed on it? Poor girl. It doesn’t make sense to do that. Read this about how the three non-Tesla cars performed in the lane-keeping system test: 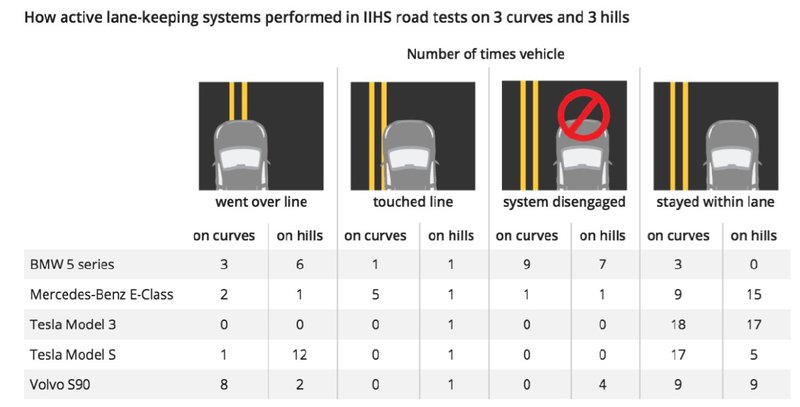 Now, if I saw the IIHS publish the results of a test pitting Waymo’s tech against Uber’s, that would be something. If they failed, at least we’d know they need to study harder for their Ph.D.s, not that they were completely incapable of passing the test because they were 8th Grade students.