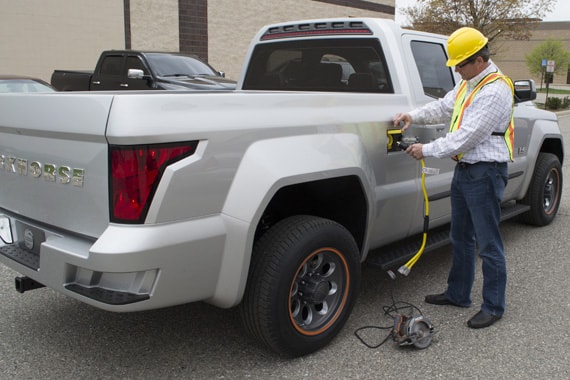 As the world keeps steadily transitioning to Electric Vehicles most of our attention firmly remains in the passenger car segment. But  companies like Tesla, Workhorse, Daimler, Nissan and a lot of other players are vying for the first mover advantage in the trucking segment.

So far things have been quiet in the lucrative pickup truck segment. As usual Elon Musk stirred the hornets nest by teasing us with his plans for an all electric pickup truck.

What would you love to see in a Tesla pickup truck? I have a few things in mind, but what do you think are small, but important nuances & what would be seriously next level?

Tesla has made it obvious that it wants to move into as many segments as possible, Cars, SUVs, Semis, Pickup Trucks and possibly anything that runs on wheels. Though Tesla’s concept pickup truck borders on the crazy, there is a good reason why Tesla would want to launch an all-electric pickup truck.

The top five full-size trucks in United States recorded a mind boggling sales of 2.3 million units in 2017. And the best seller, Ford F Series sold 896,764 trucks. Who ever moves first into the market with an electric pickup truck is looking at some serious numbers to walk away with.

The Cincinnati based Workhorse Group, announced in November 2016 that they were working on an electric pickup truck, called the W-15.

“We were first with the electric pickup truck,” said Workhorse Group CEO Stephen Burns in an interview with TheStreet. “We wanted to get first-mover advantage,” Burns said, as he nodded towards the W-15 pickup truck expected to roll out by the end of 2018. “We want to beat Tesla by a few years.”

But here is the problem. W-15 is not an all-electric pickup.

It has an internal combustion engine as well. What Workhorse CEO Stephen Burns is saying makes sense; the battery packs needed to address the high power requirement of a pickup truck will run up the cost of the vehicle. Once the cost goes out of competitive range, an all-electric pickup truck will lose against ICE pickup trucks.

“If you were trying to put enough batteries in this to survive towing and hauling, it’s gonna be expensive. So to put in enough batteries and a little gas engine to cover you for most days, we think it’s the right mix. Because I don’t think anybody’s gonna buy an $80,000 pickup truck,” said Burns. The W-15 is estimated to cost $52,000.

I hope so. As long as the car offers comparable features, gets the job done and is not overpriced, customers will be interested in running a hybrid as it will reduce long run costs.

But what will happen, if someone like Tesla or GM, that mass produces batteries launches an All-Electric Pickp Truck?

Workhorse is facing the problem of small manufacturer that cannot drive the cost of batteries down unless they reach scale. There is plenty of time before Tesla or anyone else  gets to building an all-electric pickup truck. The company wants to use that lead time to get some production numbers and if they scale up, it will allow the company to drive battery costs down and throw away the ICE engine at some point. (Hope!)

It’s a long shot, but considering the company’s size and scale taking the hybrid route is the best thing that Workhorse can do now. Let’s just hope W-15 makes its mark in the US Pickup truck market.