With the Tesla Model 3 production numbers now confirmed by multiple sources as being “over 5,000 cars a week”, Musk’s latest EV may hit the #5 or #6 position in the U.S. best-seller list for August 2018. It could rank even higher, but let’s look at various scenarios based on recent reports.

The first report we’ll cite is from Evercore ISI analysts George Galliers and Arndt Ellinghorst after a visit to the Fremont plant earlier this week. The analysts said that an 8,000 cars a week production rate is “well within reach.” CleanTechnica’s Zachary Shahan believes that figure applied to all cars, not just the Model 3. But the Evercore analysts were clear. According to the Bloomberg article carrying that report:

The analysts saw nothing that would suggest Tesla isn’t able to produce 5,000 Model 3 cars per week currently and increase that by 1,000 per week “very shortly.”

“Very shortly” could mean a few weeks or a couple of months, so we’ll take the 5,000 figure and then take a look at the next report, which is the Bloomberg Model 3 Tracker. That shows a production rate estimate of 5,321 a week. If Tesla holds that steady that’s around 23,560 for the month of August. The weekly uptick indicates that this figure could be slightly higher than that.

That being said, there’s bound to be some lag time between production and deliveries, which means not all 23,560 cars will be delivered to customers in August. What will likely happen is that the company will hit around 20,000+ deliveries, putting it right between the Honda Accord at #4 and Nissan Sentra at #5, per the chart published by CleanTechnica: 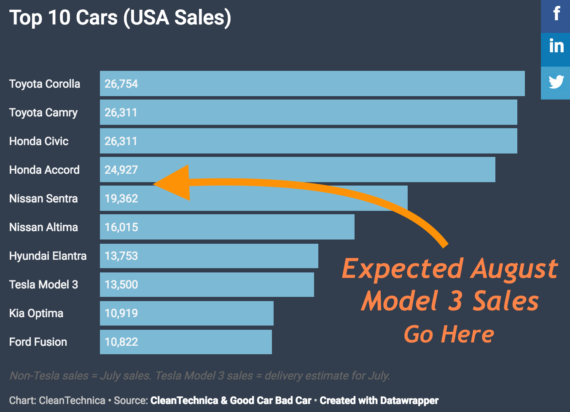 Our own estimates at 1redDrop come in at around that same figure, but predate CleanTechnica’s assumption by about a week (What can I say, we love to be “predaters”!) On Aug 11, this is what we wrote:

I predicted Model 3 production of 30,000 for Q2 two weeks before the company released its official production number at 28,578. Missed it by less than 1,500 units.

Now I am predicting Tesla to build 60,000 Model 3s during the third quarter. The Lower End.” – Shankar Narayanan, 1redDrop.

If our assumption for Q3 turns out to be as accurate as it was for Q2, then we’re looking at an easy 20,000 deliveries for August. Assuming the August figures for the other cars hold steady, that will put the Model 3 at the #5 spot for the month. Even if some deliveries are held up and the final number comes in below the Sentra’s 19,362, which we doubt it will, the Model 3 will end up at #6.

On the optimistic side, if a large number of July VINs are converted to deliveries this month and you add the converted VINs registered earlier in August, we could be looking at a #4 spot with Model 3 ousting the Honda Accord, which stood very close to 25,000 units for July. That’s optimistic, as I said, but it looks like #5 is a sure bet and possibly #4 if Accord sales dip in August as they did between July 2017 and July 2018.

Could that be the tipping point Tesla is waiting for in order to be able to release the $35,000 standard battery Model 3? Now that would be nothing short of a thumbed nose to any Tesla detractor, and poetic to boot – $35,000 Tesla available after Tesla production hits 35,000 a month!