The aftermath of the Elon Musk interview with the New York Times wasn’t pretty. Billions of dollars were wiped out of Tesla’s market capitalization, thanks to titles like these:

Tesla’s in Turmoil, is the game over for Elon Musk?

A Question for Tesla’s Board: What Was Elon Musk’s Mental State?

And just to be sure, I hit the search button after typing, “elon musk + the worst is over for tesla from an operational standpoint.”

And the result showed one article from Engadget, Elon Musk says ‘the worst is over’ for Tesla 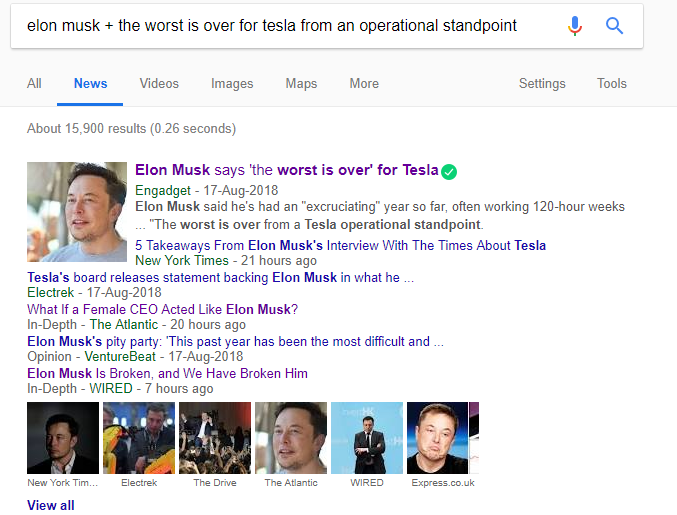 If you are reading this article then there is a good chance that you were exposed to the recent coverage and you would have certainly read how the famed New York Times walked us through Elon Musk’s interview.

Of course, there was plenty of new information that trickled out of the interview, and Elon’s personal turmoil is indeed a cause for concern. But the problem with recent coverage is that it didn’t make me feel as if it cared for the man; nor did it bother to spend even one-hundredth of its time to pay attention to that fact that Elon said that the worst is over for Tesla.

The worst is over for Tesla because Elon Musk took it upon himself to overwork his way to 120 hours a week. No life, no time for anything else and not even time to sleep. It may have led his way to search for a sedative to help him sleep. The lack of sleep may have been his Twitter excuse, who knows for sure. We don’t have statements from people close to the board to confirm.

But the point is, the worst is over for Tesla from an operational standpoint. Will Elon Musk have to keep sleeping on the factory floor and lock himself there during his next birthday? I don’t think so.

With Tesla already so close to maximum production capacity, a repeat of production hell is not going to happen. Delivery hell, perhaps, but that’s certainly not going to be as bad.

But the media relentlessly made us focus on how bad Elon Musk’s mental state is, and that he takes sedatives to help him sleep, and generally paint a picture that has the best potential to generate more clicks.

Elon may have already pushed Tesla into the hands of safety by increasing the Model 3 production rate to a point where economies of scale can kick in and bring in the profits. If he is stressed out, now is the time to take his foot off the pedal and relax. Because Tesla is already there.

You don’t have to take my word for it, but getting a company that’s on a furious growth path in an uber-competitive automotive industry – while single-handedly making every single competitor react to the company’s actions – to also cross the profitability barrier while building 300,000+ cars a year is not a joke.

And from an operating plant standpoint, from Q3 onwards, I really want to emphasize our goal is to be profitable and cash-flow positive for every quarter, going forward. – Elon Musk

He can relax all he wants now. He won’t, but he can.