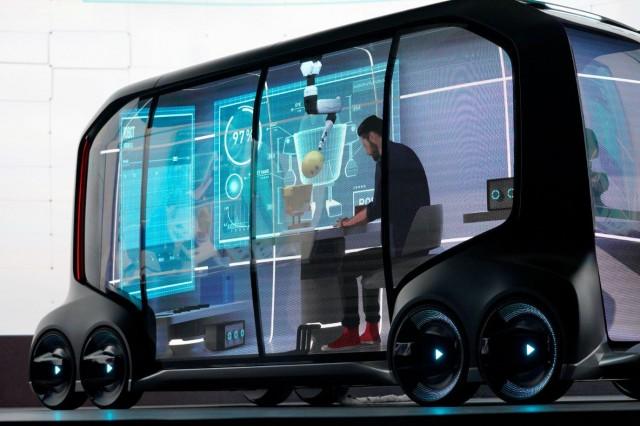 The auto industry has gone through its own share of evolution over the past century, but the next ten years certainly seem to be more exciting that the last 100. Technological advances are now threatening to beat the auto industry into a completely new shape.

Some auto companies are going to make it across the line and some are going to be just mute spectators of the ongoing disruption.

Fiat Chrysler CEO, Sergio Marchionne summed up the transition perfectly in an interview he gave to Bloomberg early this year:

Carmakers have less than a decade to reinvent themselves or risk being commoditized amid a seismic shift in how vehicles are powered, driven and purchased.

The Big 3: Electrification, Self-Driving and Ride-Sharing

This transition is as good as done. Nope, I am not talking about the number of electric cars on the road today versus the number of fossil-fuel-powered cars. I am taking about automakers racing each other to electrify their fleets.

The more battery packs they start building, cobalt or not, the lower the price of battery packs are going to become. The lower it costs to build a battery pack, the further they will ramp up electric car production. ICE engines have no way of mounting a comeback, not when China, the world’s largest auto market, has decided it has had enough of them polluting its cities while also running up oil bills in the hundreds of billions of dollars.

And Audi’s electric-mobility chief Stefan Niemand showed us what the final nail in the ICE coffin looks like. In two words: customer preference. He said:

“I hate to admit it, but Tesla did everything right. Those who had ever driven electrically are lost for the internal combustion engine for all times.”

The instant gratification of torque, the low center of gravity due to battery packs staying closer to the floor, falling range anxiety due to DC charging stations springing up all over the world, the reduction in long-term maintenance costs due to lesser numbers of moving parts, the growing used car EV market, the emission scandals and pollution control diktats by countries and cities all over the world…they all point in one single direction: The EV vs. ICE battle has already been won on a mass acceptance level. All that remains is for the naysayers to keep switching sides until there are no sides left.

Some companies like Tesla, Nissan and GM have take the lead on the road to electrification and have quite a significant head start. Tesla has now sold more than 350,000 cars all over the world, the Nissan LEAF alone has been bought by more than 320,0000 customers, while GM is not able to build enough Chevy Bolts to match the number of orders.

Other automakers are watching these numbers, and they know that no amount of incremental improvements to petrol and diesel engines is going to be enough to build a case for ICEs moving forward.

Nearly every major automaker in the world is working on some form of self-driving tech, either on their own, by partnering with some one else or by buying a self-driving startup and spinning them off as a separate entity.

Google has been trying to build a self-driving car for more than a decade and, if reports are to be believed, their spin-off, Waymo, is the one leading the self-driving car race. Apple is also in the race, but no one really knows what’s going on inside Project Titan.

But the cash hoards of Alphabet and Apple – running in the hundreds of billions of dollars – will allow both these companies to keep pursuing self-driving tech, a threat that’s good enough to make sure that automakers either follow suit or risk being outmaneuvered by tech giants.

A break through in self-driving technology will disrupt the automotive industry, but it will completely re-invent the ride-sharing industry. That’s why the world’s number one ride-sharing company, Uber, is keen on spending as much as it can on developing its own self-driving tech despite reporting record losses in 2017. They cannot afford to sit back and watch someone else build a fully autonomous self-driving car because the moment they are successful the first thing they are likely to do is launch a ride-sharing program by emulating Uber’s technology-based model.

Why AI-powered Self-Driving Tech Will Cause Massive Disruption

When self-driving cars become a reality, the need for personal car ownership will plunge. When you can summon your ride by simply pressing a button – and not even have to deal with a driver – what will be the need to own a car?

At a point of maturity, car ownership will be more of a hobbyist pursuit than because of any need for personal transportation. Ride-hailing apps exist even today, but they are still too expensive to be used full-time, making personal car ownership a better proposition for regular drivers – for now. But that will change when cars get their own driver’s licenses. It will remove the driver out of the equation, and with the highest recurring expense out of the way, the cost of running a taxi will plunge, making ride-hailing far cheaper than direct ownership of cars.

Logically, therefore, the potential disruption that autonomous driving tech can cause within the auto industry is huge. When autonomous driving technology becomes a reality, it will completely change the way we travel, and it will validate the $276 billion figure that ride-hailing market is projected to reach by 2025. According to Goldman Sachs, the ride-hailing/car-sharing segment will grow from $5 billion in revenues this year to $285 billion by 2030.

That’s why there is an arms-race-like competitiveness between companies like Google, Apple, Uber, Tesla, GM, Daimler, VW, etc. to build their own autonomous tech. Chip manufacturers like Intel and Nvidia are playing their parts, too, and every ancillary industry will see healthy growth, whether it’s chip makers, sensor manufacturers, infotainment hardware and software companies or anyone else connected with the auto industry at this point.

When the tide rises, it takes all ships up with it. And this tide will rise.