Tesla CEO – and one of the most closely watched men in business – Elon Musk is now thinking about “maybe” speeding up the Tesla Pickup truck launch. He noted at the beginning of August that the pickup truck was “Probably my personal favorite for the next product.”

The Tesla pickup truck was first unveiled last year alongside the Tesla Semi, and it was very well received by Tesla fans. Over the course of the past year Musk has been inviting ideas for features that people might want the truck to have, even saying there would be an option for a 400-500 mile range and 300,000 lbs of towing capacity. 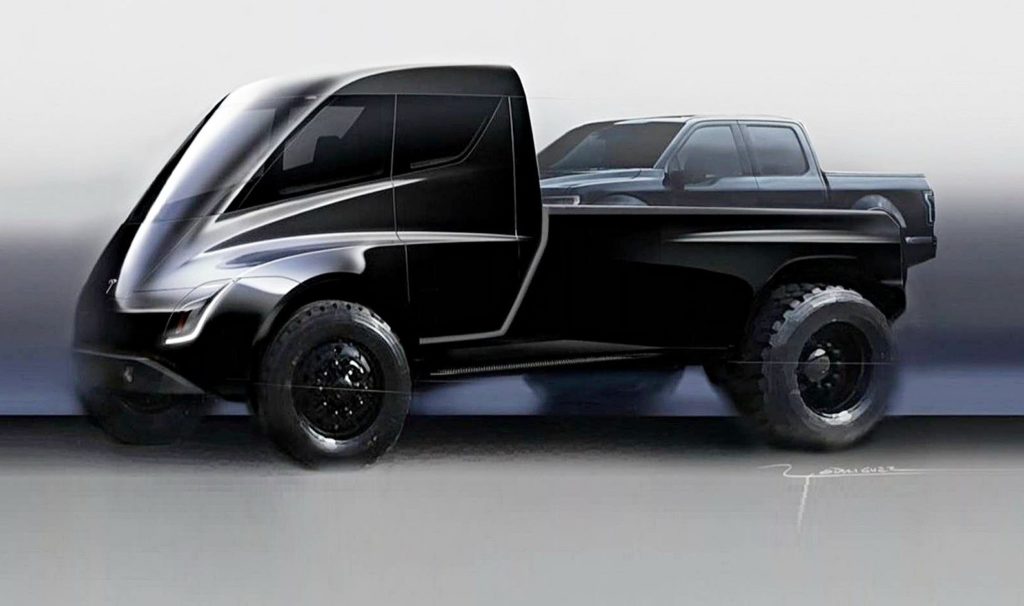 In a recent response to a tweeted query from InsideEVs about possibly speeding up the launch timeline for the Tesla pickup truck, Musk tweeted a very ambiguous “Maybe …”

While that’s not necessarily worth reporting, it’s good to keep in mind the fact that the pickup truck market in the United States is ripe for the plucking. The segment provides critical support to domestic automakers like GM and Ford. The top-selling F-Series from Ford sold 2.1% more units in July 2018 compared to July 2017, but the real clincher is that the average transaction was $1,500 higher than the prior period.

While higher pricing doesn’t necessarily mean greater profitability, it shows that demand isn’t being curtailed by higher prices. Although some truck makers seem to be struggling to match last year’s numbers, there’s an overall uptick in year-to-date sales, and that’s a healthy economic indicator that Tesla just can’t afford to ignore as it seeds multiple consumer automobile segments with its sedans and its crossover. The Model Y that is expected to be launched next year and available in 2020 will be yet another crossover, but moving into the light duty truck segment will be more meaningful, even if they’re forced to do it at a higher price point.

We don’t know what Tesla plans to do, but if they do decide to introduce the pickup truck next year alongside the Model Y and start taking reservations for both, it will give them a head start in a segment that’s not quite ready for disruption from EVs. As voiced by Workhorse CEO Stephen Burns:

“If you were trying to put enough batteries in this to survive towing and hauling, it’s gonna be expensive. So to put in enough batteries and a little gas engine to cover you for most days, we think it’s the right mix. Because I don’t think anybody’s gonna buy an $80,000 pickup truck.”

He also specifically said that “We want to beat Tesla by a few years.” That might not happen if Tesla were to move quickly and promise a 2020 production kick-off schedule for the Tesla Pickup. It will give Workhorse a lead of about a year and a half to two years because their own trucks are due at the end of 2018, but with the advanced battery tech that Tesla already possesses, Musk’s company can easily outrun a startup like Workhorse. Once a higher, sustained level of Model 3 production allows Tesla to be consistently profitable, it may even choose to partially absorb potential losses from new products, thereby at least pricing out startup competition, if not mainstream products from GM, Ford and Toyota.

Another point to note is that Tesla wants to move into the commercial side of EV transportation with the Tesla Semi, but resistance from the diesel-dominant freight segment is already strong so Tesla has a very high bar to attain to. The light duty truck segment won’t present that much of resistance, but that’s only if the Tesla pickup can match the top ICE pickups in terms of towing capacity, range on a full tank/charge and, of course, pricing.

On that last item, Ford has a solid grip on the market with its F-Series’ sub-$30,000 starting MSRP. Tesla is not going to be able to match that at low production levels. Their usual strategy is to start hitting at the high end of any segment and then gradually bringing down prices as production ramps up and economies of scale start to kick in. That’s why they took the ‘Roadster to Model S to Model X to Model 3’ path. It gave them the pricing leverage within the segment while also allowing them to keep bringing production costs down.

We believe that’s what will happen with the Tesla pickup, too. The Workhorse W-15 is priced at around $52,000, so that’s a good starting point for Tesla to aim for.

Right now, there are two constraints that can delay the Tesla pickup truck’s launch date and prevent a meaningful entry into the light duty truck segment: the first is pricing and the second is the added investment required. On the pricing front, they’re not going to have much leeway above the $50,000 level. On the investment side of things, the Model 3 is currently taking up all the extra resources that Tesla can muster, and it’s clear they need at least a year before there’s some financial wiggle room for another car to be launched, while keeping the company profitable right through – a crucial consideration now that Tesla has chosen to remain a public company.

From a market coverage perspective, in our opinion the Model Y is not nearly as critical as the Tesla Pickup. However, it is definitely important from a profitability perspective (emphasis ours):

“Mark Wakefield, head of the North American auto practice for consultancy AlixPartners, said manufacturers can price SUVs and crossovers substantially higher than sedans, notably vehicles built on the same platform, because the taller vehicles have more passenger and cargo space.

“There’s little difference in body and chassis cost,” he said. “Interiors tend to have more content in crossovers and there can be powertrain differences, but the manufacturing cost differential is modest.”

The Model Y is going to be built on the Model 3 platform, which means there’s likely to be a higher margin, giving Tesla a support for its profitability goals while pushing down prices on the Model 3 and going even lower with future models.

The logical way forward would be to do an official launch and open up reservations for both cars in 2019. It will buy them about a year before they have to start deliveries, and it will help put some money in the kitty for initial production runs without hurting their bottom line too much. More importantly, it will allow them to test the waters in a new auto market segment without compromising on the Model 3’s resource needs, while still unveiling the Model Y on schedule.

Frankly speaking, if Tesla wants to move into the pickup truck market quickly, we don’t see it happening any other way.