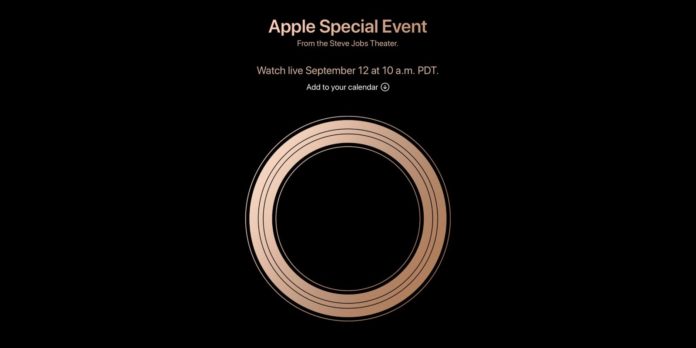 Apple will launch its new iPhone models at its annual event in September. Last year, Apple announced three new iPhone models on September 12, including iPhone 8, iPhone 8 Plus, and iPhone X. 2017 marked the 10th birthday of Apple’s mighty iPhone models. Apple iPhone has changed so much since the day one and become much better.

The current iPhone models are a great success on the market, with millions of units sold. In the first three months of the year, the Cupertino firm sold 16 million iPhone X units. The iPhone X is a special iPhone model which marks the biggest design change Apple has ever made on an iPhone model.

Sources say that Apple will unveil new iPhone models on September 12. Last year, the Cupertino firm debuted iPhone X on the same day, and there is a good chance that Apple will do the same thing this year.

Apple has begun sending out invites to the world press for its September event. The firm officially confirms that the event will take place on September 12 at the Steve Jobs Theater. That’s the same location where the last year’s event took place.

Apple also gave us a preview of the event by releasing a theme that features the tagline “Gather Round”. However, the theme does give us exactly what Apple will introduce at this year’s event. Sources claim that Apple will announce new MacBook Pro models and new iPad Pro lineup at the event.

The MacBook Pro is one of the most powerful laptops on the market. However, Apple’s laptops are falling behind Windows 10-based PCs on the market. Therefore, Apple needs something new to boost sales performance this year. Last month, the Cupertino firm announced a refresh to its Pro lineup, with Coffee Lake processors and better Touch Bar.

However, the 2018 MacBook Pro failed to live up to expectations on the market as Apple reported a slow sales performance. Sources say that Apple is planning to launch a new MacBook Air this year. In reality, the Air lineup has not seen a major internal hardware upgrade since the days of 2015. Sources claim that Apple may discontinue the Air lineup and work on a new MacBook.

According to tech experts, the upcoming Air laptops will feature Retina displays at launch. This is something we have been expecting to see for years as the Air is the only Apple device that does not feature a Retina display on the market.

Apple is also believed to announce the next generation of Apple Watch at the event. In reality, Apple skipped the WWDC event to focus on software updates. The Apple Watch Series 4 will come with a bigger display, smaller bezels, and new watch faces. According to recent reports, the Apple Watch series 4 will be compatible with all current straps and bands at launch.

With a lot of contradictory rumors, it’s hard to tell what’s coming at this year’s event. We are now so close to the event. Let’s wait and see.