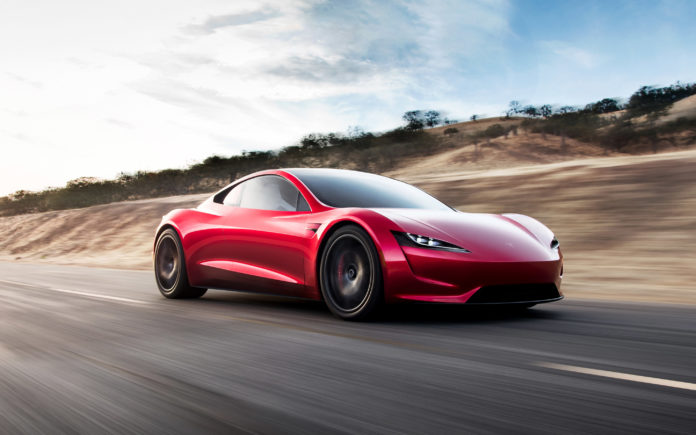 Announced in November 2017, the second-generation Tesla Roadster (2020) is the next supercar from the stables of Tesla, Inc. The four-seater all-electric vehicle is expected to have an acceleration time of 1.9 seconds going from 0-60 mph, which will make it the first street-legal production car to break the 2-second barrier and the quickest on-road car in the world under production. That’s unless someone else beats them to the finish with another production car, which is unlikely. Either way, it will most likely still be the quickest pure EV on record.

According to Tesla CEO Elon Musk, the Roadster (2020) will be able to do 0-100 mph in 4.2 seconds. At that rate of acceleration it should be able to do the quarter-mile in 8.9 seconds, per Musk.

Musk has said that the Roadster will have a 200kWh battery pack and a 620-mile range per charge, or over 1,000 kilometers. This spec is currently unheard of in an EV. As a matter of fact, even the average American ICE car has a top gasoline range of about 400 miles or so. Here’s an excerpt from SolarChargedDriving to give you some perspective on that:

“So, here goes, a list of some of the current gasoline cars which, depending on driving conditions, how fast you drive, etc. will probably get you 400 miles or more on a tank. And, by the way, cars on this list are exceptions to the rule in the U.S., where the majority of cars tend to have a top range of between 300 and 400 miles:

So, the upcoming supercar from Tesla will offer a higher range than even the most popular ICE and hybrid vehicles.

The drivetrain comprises two rear motors and one front motor, making it an all-wheel-drive, and it comes with torque steering.

Why is Tesla making this car?

“The point of doing this is to give a hardcore smackdown to gasoline cars,” Musk said when unveiling the car.

Production is expected to start in 2020, hence the name Roadster (2020). That could be an optimistic timeline considering the fact that Tesla is already stretched to the limit with Model 3 production and has three new vehicles yet to go into mass production: Model Y, Tesla Pickup truck and Tesla Semi truck.

Competition is getting ready to take on the Roadster

Ferrari seems to want to be the first one to take on the Roadster two years from now. Ferrari’s CEO, Sergio Marchionne, said this:

“If there is an electric supercar to be built, then Ferrari will be the first.” – Barrons

Ferrari sold 8,398 cars in 2017 and plans to sell 9,000 units in 2018. In the United States alone, Ferrari sold 2,811 cars in 2017. So there is a decent-sized market out there for the Roadster to explore. Let’s not forget the first generation roadster here, which sold 2,500 units in 30 countries around the world. That would be a good place for the Roadster to start off, targeting 2500 units.