In a first of its kind review, Consumer Reports tested four partially automated driving systems and ranked GM’s Super Cruise as the best of the lot. According to Consumer Report, Super Cruise edged out Tesla Autopilot and made it to the number one spot because it did the best job of balancing technology while also making sure that the driver is paying attention.

Why CR Tested only these four systems?

“CR tested and ranked these four particular systems because they’re among the most capable and well-known on the market. Other automakers, such as Honda and Toyota, offer similar features, but they aren’t marketing their automation capabilities in the same way. ”

“We have been evaluating these systems on a case-by-case basis for a few years, but we are at a tipping point where they are now going mainstream. Stacked up against each other, you can really see significant differences. The best systems balance capability with safeguards—making driving easier and less stressful in the right situations. Without proper safeguards, over-reliance on the system is too easy, which puts drivers at risk.”

Why GM was the best?

GM raced to the top spot because it’s Super Cruise did the best job in monitoring driver engagement. Powered with an eye-tracking software Super Cruise monitors driver’s attention by using a small camera and alerts the driver when they need to pay more attention or take back control.

When Super Cruise identifies that the driver is not paying attention, it warns the driver with a red warning light on the steering wheel, vibrates the seat along with a highly audible alert. If the driver does not take back control, then it starts to slow the car down.

The monitoring and responding part is where Tesla scored poorly. Tesla Autopilot does not offer an eye tracking system.

All four systems have their own limitations

GM’s Super Cruise functions only on divided highways that are already mapped by GM. According to GM, the company has mapped more than 130,000 miles of freeway within 5 cm scan accuracy.

Though Autopilot scored highly for its capabilities and ease of use, CR noted that Tesla allowed drivers to use Autopilot on small, curvy roads with poor lane markings and operated erratically in these situations instead of locking the system out.

Nissan and Volvo systems performed poorly on curvy or hilly roads and were prone to frequent lane departures. 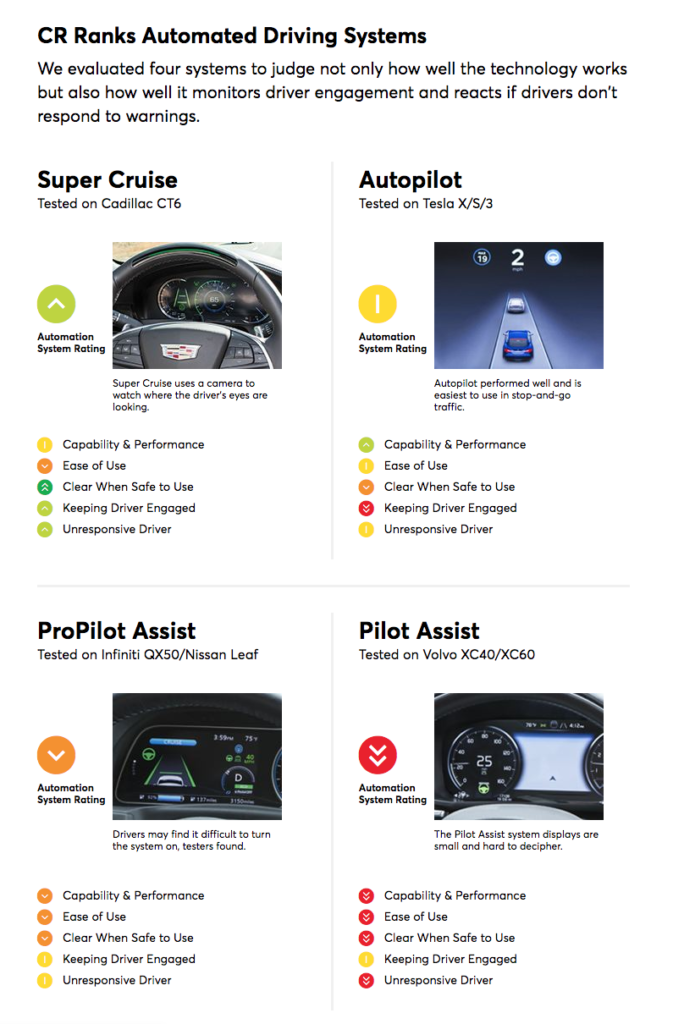