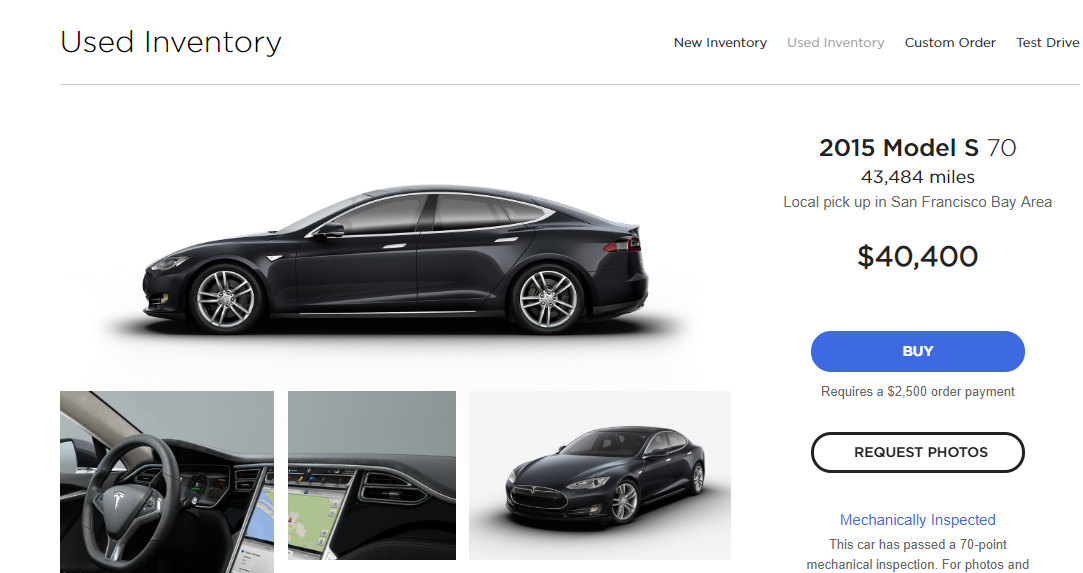 “We track used car inventory at CarMax, and by averaging the cost of Teslas over time, a clear pattern is emerging as of this fall and winter: as the supply of used Teslas increased in October, the average price dropped”, writes Joshua Fruhlinger, Thinknum

Demand and supply play a massive role in deciding the price of any product and used cars are no different. The recent price drop of used Model S can be directly attributed to the increase in inventory, but I also believe that there are several other factors at play here.

Used Model S is going to take a massive hit due to model 3 sales and what we are seeing here is the start of Model 3s impact on the US car market, new and used.

I don’t have the data to prove that used Model S is taking a hit because of Model 3, but I can still prove it. Let’s say that you are offered two options.

If you order now, Tesla says it will deliver Model 3 in late December or in January 2019. The price will drop further by $7,500 or $3,750 depending on your delivery date.

The three-year-old Model S is fighting a losing battle against the new model 3. When the price is nearly the same, I am sure most of us will pick the Model 3 over Model S.  The only way the Model S can sway my decision is by dropping its price further.  As long as it stays closer to Model 3, I am not taking the bait.

Part of the problem is the battery

The Model S we used in this example has a battery and the buyer will not be sure how much it has degraded in that period. With the new Model 3, the buyer gets a brand new battery pack that offers an additional 30 miles.

The space offered by Model 3 is a lot less than Model S, but I will still take it, thanks to all the new tech Model 3 comes with.

“If you don’t cannibalize yourself, someone else will.” – Steve Jobs

As we can see from the chart above, used Model S price steadily declined since October, when Tesla started improving its delivery timelines.

In September 2018, Tesla delivered a massive 22,250 Model 3s and followed it up with 17,750 deliveries in October. Some customers who ordered high-end Model 3 versions have taken delivery in days.

Read more: How Tesla holds its resale value better than comparable gasoline and electric and vehicles