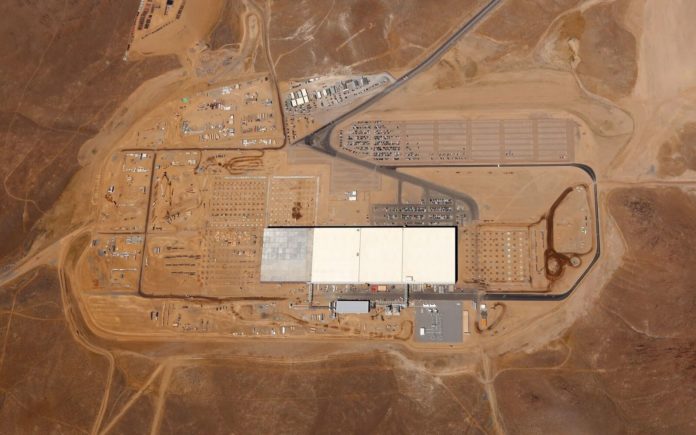 Tesla’s massive battery facility outside Reno, Nevada has grown five-fold in the last two years, from 1.1 million square feet by the end of 2016 to the current 5.4 million square feet, but Tesla’s most substantial moat is still barely scratching its potential surface.

According to Reno (part of USA TODAY Network), Tesla Gigafactory “is just 30 percent of its potential size and is already producing more batteries than all other carmakers combined”. But the real number could be less than 30% because Tesla keeps increasing its output projections for Gigafactory.

If you are thinking about whether or not Tesla has enough land to expand Gigafactory, let me tell you this: Tesla has so much land in
Storey County that they can build another ten Gigafactories if they want to.

Gigfactory 1, located in Storey County, Nevada sits on a 3,000-acre lot. The footprint of the current building stands at 5.4 million square feet, the equivalent of 124 acres.

The original site was only 1000 acres, but in June 2015 Tesla exercised its option to buy 1,864 acres of adjacent land, giving them more than enough land for future expansion.

Space Requirement:Up to 10M square feet with 1 or 2 levels

“In mid-2018, battery production at Gigafactory 1 reached an annualized rate of roughly 20 GWh“. CFO Deepak Ahuja told analysts during the third quarter 2018 earnings call that Gigfactory output is around 20 GWh and Model S and X may add another 4 or 5 Gwh.

He said, “For Q3, vehicles made around the world, their total battery capacity was about 20 or hours. And what we produced in Q3 was about the same or a little bit higher, so about half of  batteries “. Then he added, “Just the Giga itself is about 20 and on top of that S and X is – I don’t  another 4 or 5.”

Tesla has to double its current production capacity at Gigafactory to reach that level. The more batteries the company builds, the better its cost advantage will be.

“Certainly incremental improvements to the battery pack range are important, but the thing that is is reducing the cost per kilowatt hour…the fundamental focus is the cost per unit of energy. So that is what the Gigafactory is about. It’s taking economy of scale as far as we imagine, to a very extreme level,” Musk said
during Baron investors conference in 2015.

Stay tuned for: The Future Plan.