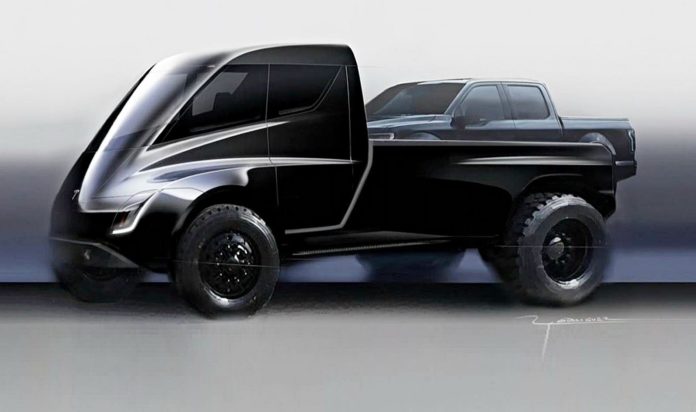 We know that a lot of people are eager to see the Tesla Pickup Truck that Musk promised, but the CEO seems to be the eagerest of them all. In a tweeted response to a question earlier this week, Musk had this to say:

North America is a huge opportunity for any pickup truck, not to mention an all-electric one that can supposedly tow up to 300,000 pounds, offers a 240-volt connection for power tools and go from 0 to 60 mph in 3.9 seconds. The pickup truck market in the U.S. alone counts for about a quarter of a million units sold every month, adding up to approximately 3 million trucks a year.

How popular can we expect the Tesla Pickup to be?

One key factor in how well the EV truck will sell is pricing. The top 3 brands – Ford F-Series, Chevy Silverado the Ram – account for nearly half of all pickup sales, and this is the target market Tesla will want to go after.

In terms of styling, Tesla is being optimistic, albeit with a backup plan. Musk has already boasted a futuristic design along the lines of Blade Runner, but he also admits that it might put some people off, in which case Tesla will start making a more conventional truck, he said in this recent interview with Recode on Halloween night.

But the real purchase case for a Tesla pickup truck, be it overly futuristic or the epitome of practicality, is that it will be the predecessor of generations of electric pickup trucks to come in the future. There’s no doubt that EVs are the future – Tesla has proved that much.

And when it does come out in the next few years, it will set the tone for its descendants. In other words, it will help define a new category of pickup trucks that can go 300, 400, 500 miles or more on a single charge, tow a fully-loaded semi and still be able to hold its head high in a traffic light drag race against the McLarens and Ferraris of the world.

To Musk’s credit, he has yet to create a non-seller. The original Roadster marked his first EV success, while the Model 3 is definitely his biggest and the one with the most potential. What this implies is that no matter the design, any number of units they can make will be lapped up by a ferociously ardent and growing body of fans/buyers.

On the flip side, there are several challenges to introducing a new product in a segment where the territory is clearly marked off between the top players.

Ford sells nearly double the number of F-Series trucks as the Chevy Silverado, while the Ram ranks admirably in third place. Dislodging the Top 3 from the market is not going to be easy…or even possible, for that matter. A silent pickup truck just won’t do it for many die-hard truck fans. At least, not right off the bat.

And then there’s the question of the right price. The price band for trucks is pretty wide, which means multiple variants may be in order.

Tesla doesn’t yet have the resources to start making these trucks en-masse. They’ve already got their hands full trying to expand into Europe and other international markets with the Model 3, and the Model Y is expected to be next in line.

The capacity to make trucks will certainly come, but considering their need for profitability and other priorities like Model 3 global expansion and the Model Y launch, it could be at least two years before we see the production model of the Tesla Pickup Truck.

In the meantime, the 2019 Tesla Pickup Truck prototype will make sure that interest remains high, and the extended time frame between prototype and production will give them the opportunity to test out various designs and focus on functionality vs esthetics, which is actually something they’re great at doing.

Much of this is conjecture, simply because we have very little to go on. Nevertheless, it’s a sure bet that the entire auto world will be watching and waiting for the Tesla pickup truck to finally be unveiled next year.