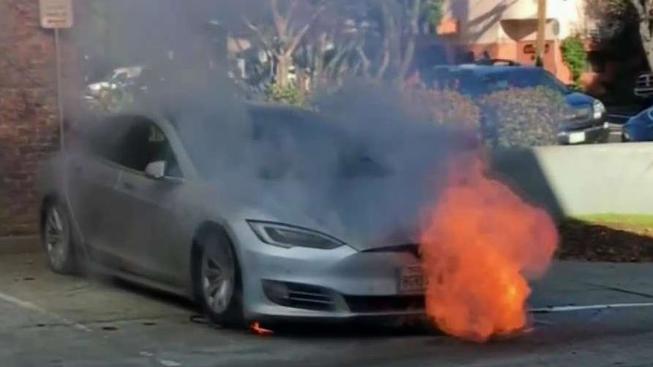 What might be a battery fire almost completely gutted a Model S in the Bay Area last night. The owner was having the car towed to a garage to fix a flat tire, but on the way the vehicle started spewing smoke. By the time the Fire Department reached the scene, the car was already in flames.

To make matters worse, the fire reignited after being put out. Nobody was hurt in the incident, and Tesla is now investigating the matter.

Interestingly, this isn’t the first case of a ‘double fire’ in a Model S. The crash that killed its owner in the Mountain View also involved a car that reignited after the original fire; in this case, it was days later. Another incident also occurred in Alameda County, where a trashed Tesla Model S was found in a pile of burning junk.

There are very few statistics to build a case against EVs, but an in-depth study for the National Highway Traffic Safety Administration claimed that:

“The propensity and severity of fires and explosions from … lithium ion battery systems are anticipated to be somewhat comparable to or perhaps slightly less than those for gasoline or diesel vehicular fuels.”

The video report from CBS Bay Area is below:

Li-ion battery fires are not new. In 2013, Boeing decided to ground its entire fleet of Boeing 787 Dreamliners after the batteries on two of their aircraft caught fire. In January 2014, Japan Airlines Co Ltd decided to ground a fleet of the same aircraft after a similar fire at Narita Airport.

Since Lithium is a highly reactive metal, the battery must be encased in a protective sheath to prevent accidental damage and a subsequent thermal event. Tesla, for example, decided to push a software update after two incidents of road debris causing damage to the undertray protecting the batteries from upward impact. These two also involved Model S EVs.

Tesla’s batteries have the highest energy density of all production Li-ion batteries. That’s what gives these cars the impressive range they boast. However, it very likely increases the chance of a runaway thermal event as well.

We’ll know the reason for the apparently spontaneous fire in the Bay Area case once Tesla releases the results of its investigation. Until then, it’s important to understand that EVs are no more dangerous than ICE or internal combustion engines. The dangers are different but equally extreme.

In a gas engine, the pressure inside each cylinder just before it fires reaches a maximum of 50 bars or more. That’s like being 1600 feet under the ocean. The peak temperature in an ICE engine is about 600 to 700 degrees celsius – enough to cook a steak. And the spark plug produces about 20,000 volts to ignite the fuel-air mixture.

We don’t think about these things because they don’t happen that often. When they do, they’re no longer news. It’s different with EVs because they’re threatening to take over ICEs and dominate the transportation industry in the next couple of decades. That’s why they’re in the news. When was the last time you read about a gasoline car catching fire and every news agency in the country picking up the story?

People must stop over-reacting to Tesla fires. They’re as few and far between as the number of fires involving ICE vehicles, perhaps more so. Lithium batteries are safe, but under certain circumstances, they will do what they’re supposed to – store and release large amounts of energy. How that energy is released is the issue, and one that is an active discussion point for any battery maker, including Panasonic and Tesla.