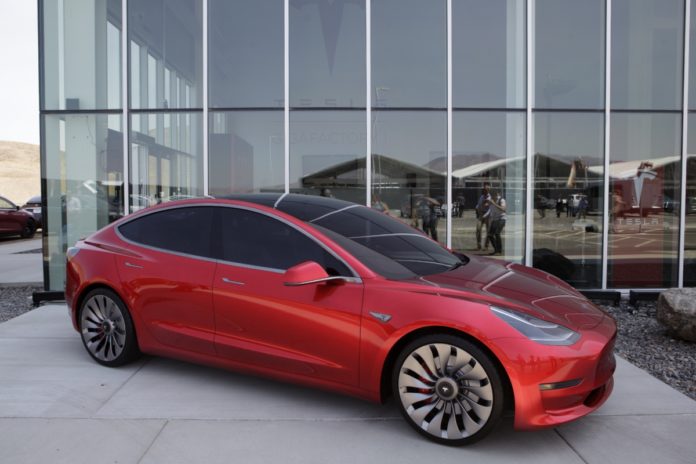 Tesla shares will drop 30% in the next 6 months due to increased competition, warned Goldman Sachs analyst David Tamberrino after assigning a $210 six month price target for Tesla shares in September.

With two more months left, the price target seems woefully off, as Tesla is trading well above his price targets. Tamberrino reiterated his sell rating on Tesla this Tuesday, setting a $225 price target, a massive drop from current levels.

A spot on assessment, as Tesla is doing everything it can to get US customers to order Model 3 this month.

A wait-list for customers who are ordering now.

Announced that all the cars that are built are ready for sale – including display cars and the ones with a scheduled delivery date post  December 31, 2018.

Brought back the referral program to offer free unlimited supercharging for six months.

Also Read: The Many Different Ways Tesla is Boosting Sales

All these actions will bring more customers this month, reducing the number of potential customers in the next month and so on.

Tesla is planning to deliver Model 3 in Europe by early February and China by March or April. But analyst David Tamberrino argues that the international demand won’t be sufficient to compensate for any shortfall in US orders.

He writes “We believe there is a pull-ahead of deliveries and option mix occurring in the U.S. in the second half of 2018 that will likely create a lull in demand starting in the first quarter of 2019 that may not be fully made up by initial deliveries across Europe,” Tamberrino wrote.

By the end of the second quarter, Tesla had 420,000 Model 3 reservations. Tesla delivered 53,239 Model 3s in the third quarter of 2018 and may end up delivering a bit more than that in the fourth quarter.

If Tesla delivers 100,000 Model 3s in the second half of 2018, that would account for only a fourth of the reservations the company had in June.

Though a significant portion of reservation holders are still waiting for $35,000 Standard battery Model 3, Tesla has sold 84,230 Model 3s in North America between Q3-17 and Q3-18.

This clearly shows that there is enough demand for Model 3 even when it is priced more than $46,000.

The European premium sedan market is much larger than the US market and the Chinese market is  as well.

Both the German car makers are selling nearly 10k units each (5 series and E class) every month. The market for the mid-size premium luxury sedan is huge and Tesla Model 3s demand has to be in the order of thousands of units every month in China.

If Tesla can sell nearly 140,000 units of Model 3 in North America with the current model line up, repeating that feat in Europe and China is not going to be that difficult, thanks to market size and Model 3 waitlist.

“(Tesla) sees Europe as a very significant market opportunity given the premium market is twice the size of the U.S. one. (Tesla) believes consumer awareness in Europe has significant headroom to improve and sees Germany as the most likely location for a local production facility,” – Adam Jonas

The Premium market in EU is twice the size of United States, but for some reason, Goldman Sachs still thinks there won’t be enough room for Tesla to run in 2019.

Tesla will be more than happy to sell 100k units each in North America, Europe, and China every year. They should get there because all three markets have enough volume on offer to cover the Model 3 price stretch. If Tesla keeps dropping Model 3 price, the volume could further increase.

Also Read: Is it a coincidence that Tesla Model 3 order backlog in the United States looks exhausted when the Tax credit expires