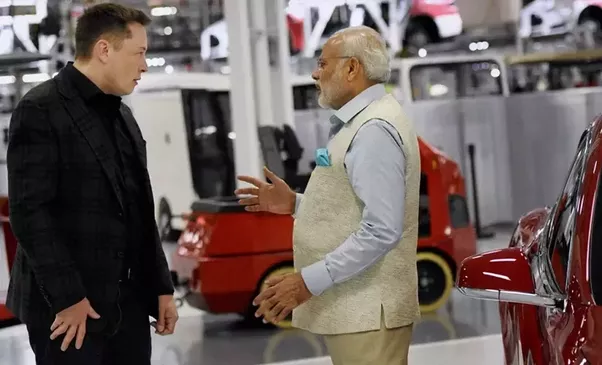 Well, of course we jump at the chance to report that Musk still has India firmly in his mind for expansion. It’s an irresistible – albeit impractical right now – market for Tesla. At least, as far as electric cars are concerned.

This is what Musk said earlier this year:

Would love to be in India. Some challenging government regulations, unfortunately. Deepak Ahuja, our CFO, is from India. Tesla will be there as soon as he believes we should.— Elon Musk (@elonmusk) May 30, 2018

At the time, it sounded like a stock response to a question he’s been asked many times. And then in November he tweeted that a “partial presence” in India was a possibility, and this came with an actual time frame:

And then today Musk cryptically tweeted a gif, a clip of a song from a popular Hindi film, Bajirao Mastani.

Once again, the media is abuzz with rumors of Tesla in India by 2019. Could it be true, or is there something else most people appear to be missing?

Let’s rewind a few years to 2015, when Indian Prime Minister Mr. Narendra Modi visited Tesla’s Palo Alto HQ and the Fremont factory. Of the little we know about what was discussed, the topic of batteries and farmers comes to mind. Mr. Modi even mentioned it in a tweet after his visit.

Thanks @elonmusk for showing me around at @TeslaMotors.Enjoyed discussion on how battery technology can help farmers pic.twitter.com/r2YuSPPlty— Narendra Modi (@narendramodi) September 27, 2015

That offers a clue as to what “partial presence” might mean.

Rather than jump the gun and assume that we’re going to see autonomous Model 3s and Model Ses zipping up and down India’s roadways next year, let’s look at an even bigger opportunity. Power storage.

This is a likely train of thought for Musk because India is still struggling with power issues. Considering that the basic power infrastructure is fraught with corruption and inefficiencies, it’s going to be a long while before a decent charging infrastructure for EVs can be set up across the country. One website that tracks community charging stations shows that there is a grand total of 274 such locations in India.

274. That’s a drop in the ocean compared to what’s really needed, even to connect just the major metros to each other. In stark contrast, there were about 48,000 charging stations in the United States at the beginning of 2018. That’s not a gap, it’s a chasm.

So, no, we don’t think Tesla is in a hurry to start marketing electric cars in India, although a few will find their way into rich hands as imports. The real money is in power generation and storage solutions.

Renewable energy accounts for about 20% of India’s installed power capacity. 33% if you include large hydroelectric projects, which operate under a different Ministry. The opportunity is huge for Tesla in solar, especially when you know that current installed capacity is 26 gigawatts against a potential capacity of 749 GW.

The challenges are equally huge. Musk was putting it politely when he spoke of “some challenging government regulations.” For Tesla to come in and establish a significant presence in the power generation and/or power storage market, it will require billions in investments. The logistical challenges alone are daunting enough.

But if Tesla makes an entry, this is where it will probably be. When Tesla still had plans to bring its EVs into the market, it was blocked by a regulation that made it mandatory to acquire at least 30% of all required parts from a local source. India doesn’t have that, and Musk clearly highlighted that aspect. But a subsequent clarification via the government’s @makeinindia Twitter account said that Tesla would not be subject to such a regulation.

.@elonmusk With respect to news reports on launch plans of Tesla in India being delayed, please note some key clarifications#MakeInIndia pic.twitter.com/9RFICGM9Kk— Make in India (@makeinindia) May 23, 2017

Despite the clarification, there was no movement. Tesla had even gone so far as to open pre-bookings in India, assuming that it would happen sometime last year or this year. Nothing ever came out of it. PayTM CEO Vijay Shekhar Sharma was one of the reservation holders for the Model 3, incidentally.

Now, there’s not a peep from anywhere about Tesla in India, at least not with respect to EVs. The cars will eventually come, no doubt, because Tesla is the undisputed leader of the EV segment, and India is not a market that can be ignored for long. Even retailers like Walmart know this, which is why after years of contemplating an entry strategy they finally shelled out $16 billion for a controlling stake in Flipkart, India’s admirable answer to Amazon.

For now, however, there’s a low hanging fruit in the form of power storage. This is something that was discussed between Musk and Mr. Modi in 2015 and spawned stories of a Gigafactory in India to make EV batteries. India is the perfect market for such a project, and at a time when solar potential is high and the global demand for Lithium-ion batteries is about to explode. And by this time next year Tesla will be in a much better position to leverage debt or look for local sources of funding in India, the way it is doing in China for Gigafactory 3.

“Without many people realising it, battery production that is cell production is going to be the biggest industry to exist over the next decade.” – Vineet Mittal, managing director of Welspun Energy and chairman of the Assocham Solar Task force.

Another industry expert, Tarun Mehta, co-founder and CEO of Ather Energy, an Indian EV maker with the likes of Flipkart founders Sachin and Binny Bansal among its investors, says this:

“In fact Tesla coming to India will be a bigger PR thing. If you take a 5 year window which Tesla will need to setup a Gigafactory in a place like India, we’re going to be seeing a lot more activity. It’s not going to be just Tesla alone. We will see a lot more players getting in.”

Solar and storage are two potentially huge breadwinners for Tesla. Neither business has panned out the the U.S. market as planned, and India presents the perfect solution to that problem. Volume brings down cost, and if Tesla can work out an equation in which it can make money in India while benefitting the local economy, you can be sure it’s still on Musk’s radar nearly four years later.

Will things start moving next year? It’s as good a time as any, and although Tesla will be busy with the European expansion for Model 3, the Pickup Truck prototype, the Model Y unveiling and production targets back at home, it needs to move quickly to capture India as a major hub for battery production. Is it finally time for Tesla India?