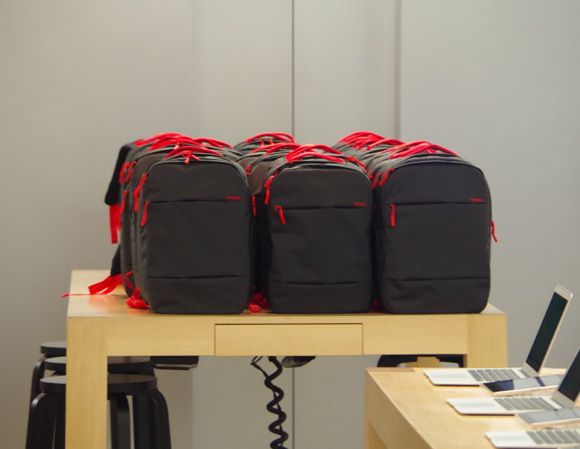 Buyers of Apple Watch and other Apple products in Japan on New Year’s are now getting gift cards for as much as 24,000 yen (approx. $220) to celebrate the arrival of 2019. But even more interesting is how it all started.

Fukubukuro, roughly translated into Lucky Bags, was a sales initiative that was started a few years ago to get rid of older stock. It helped make way for fresh inventory and boosted New Year sales in the bargain, the operative word being “bargain.”

In 2014, for example, a 33,000 yen ($313) lucky bag might have contained a MacBook Air or an iPad along with expensive accessories. The bags themselves were stylish backpacks, and would contain a collection of goodies that you couldn’t choose, but paid a certain amount for anyway. If you were lucky, you got as much as five or six times that value in merchandise.

“One customer — Mr. Sato — arrived at Apple’s Shibuya store one day early, grabbed his ticket, and then waited for the store to open.

Bags for the 2014 fukubukuro season were 3,000 yen more expensive — suggesting that Apple might be even more generous than on previous occasions.

In the end, Mr. Sato walked away with an 11-inch 128GB Macbook Air, a Magic Mouse, a pair of JayBird BlueBuds X wireless earphones, a Morphie juice pack powerstation mini portable battery, a Twelve South PlugBug World travel plug adaptor, a Beats by Dre Pill Speaker Gold Edition, a Power Support Air Jacket sleeve for the Macbook Air, and an Apple t-shirt — in total a haul valued at 176,840 yen, or around $1,680.”

Over time, Apple did away with that tradition and transitioned the event into a one-day sale with deep discounts on older inventory. Here’s what they’re offering this year:

But Japan is not the only lucky Apple market that’s getting goodies this year. In the United States, 2018 iPads are selling for $355, and Apple HomePod smart speakers for $259. Amazon Prime is offering some great deals on MacBook Pros as well:

Not to be outdone, B&H is offering these prices on 2017 iPad Pro units:

Best Buy is also going deep on discounts, with Apple Watch Series 3 units available starting at $279 for the 38mm variants.

If you live in the UK, don’t worry. There are plenty of Apple Watch deals available for you, too. Currys.co.uk is currently offering Apple Watch Series 3 starting at £249.00. EE Shop has great monthly payment deals for new and old Apple Watch models starting at £25 a month for new pieces and as low as £16 a month for refurbished “Good as New” pieces.

To be honest, you don’t have to look very far for New Year discounts on Apple Watch and other Apple products. Most stores have inventory that they want to get rid of quickly, so there will be lots of deals online and in-store all through January. If you don’t mind older models, then this is the right time to buy an Apple product.

Fukubukuro might have been phased out, but worldwide, there is no dearth of deals for Apple merchandise, whether it’s an iPhone X or a MacBook Pro from a couple of years ago.