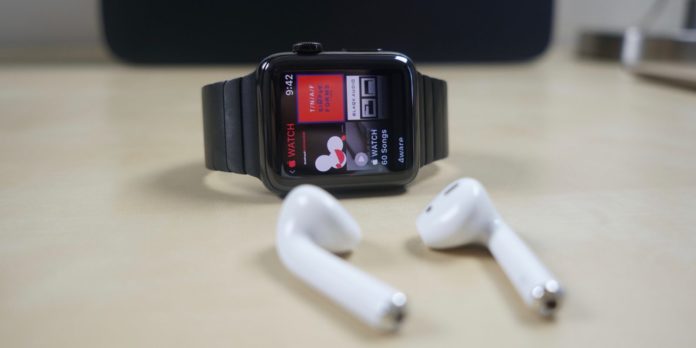 Apple Watch is now in its fifth generation in the Series 4 range. Over the years, we’ve learned a lot about this smartwatch, its superior sales numbers and how it has genuinely helped people get healthier and fitter. But on the accessorizing front, not many other products go well with Apple Watch other than the fancy bands that are hawked on the Internet and in physical stores, but AirPods literally and figuratively pairs really well with Apple Watch. And AirPods 2, which are expected to be available very soon, take that to a whole new level.

Here’s why you should consider buying the next generation earbuds from Apple to compliment your Apple Watch Series 4’s fitness and health tracking capabilities.

Why Bluetooth 5.0 is an Important Deciding Factor

First of all, the pairing aspect can’t be overstated. Apple Watch Series 4 with GPS + Cellular supports Bluetooth 5.0, and so will AirPods 2, as originally reported by MySmartPrice.com.

Bluetooth 5.0 is the next generation wireless communication standard. Since Bluetooth 4.0 and the subsequent Bluetooth 4.2, there’s been tremendous focus on Bluetooth Low Energy, which reduces power consumption on peripheral devices – like AirPods. Therefore, it stands to reason that it will also reduce power consumption by the Apple Watch Series 4 when it’s paired with AirPods 2.

The second reason why AirPods 2 will be great for Apple Watch 4 is that both are part of the same tight-knit ecosystem created by Apple, which includes iCloud integration and compatibility with other Apple Products.

A Question of Comfort

The third reason is comfort. Anyone who regularly uses Apple products knows that they’re ergonomically designed for comfort. The Apple Watch is case in point, as are the current AirPods. In addition, the sound quality is superior to most wireless earphones, as attested to by The Verge’s Vlad Savov in 2018.

“Apple’s AirPods design, which I initially ridiculed, is actually the best and most functional one available for truly wireless buds today. Because Apple moved the Bluetooth electronics and batteries to the stem, it was able to use the full cavity of each bud for sound reproduction. That’s how the AirPods reproduce a wider soundstage than most Bluetooth earbuds without being any thicker or protruding from the ear.”

This aspect is not specific to AirPods 2, so you can do this on regular AirPods as well. The volume right now can only be controlled by a Siri command or by pulling out your iPhone. With the Apple Watch, you simply use the Digital Crown to control AirPods volume. Easy and quick.

You can also check the power remaining in your AirPods through your Apple Watch. That’s why the integration is important, because it gives you a lot more control. With Bluetooth 5.0 added to the mix, you won’t even have to check on the battery that often. If you need to, you can just do it on the watch instead of on the phone.

If you have your AirPods on and are wearing your Apple Watch, you don’t have to miss phone calls because your iPhone is on silent mode. Answer on your watch and you can start talking with the AirPods on. Simple and private. When you’re done, the track you’ve been enjoying automatically resumes.

Tip: To avoid looking at the watch or pulling out your iPhone for an incoming call, just go to Settings > Phone > Announce Calls and tap on Headphones Only. That way, when a call comes in, it will be announced in your AirPods.

Since Apple introduced the LTE version of Apple Watch with Series 3, it’s not necessary to carry your iPhone on your daily run. With AirPods, that process is further simplified because you can have your watch on, answer calls literally on the go, and you won’t even have to stop to see who’s calling. Technology simplified.

There are rumors that AirPods 2 will be waterproof, just like Apple Watch. That means you can probably wear them when swimming, which is a big deal for anyone who loves water sports. They’re just rumors for now, but it’s likely that Apple will put that effort into an on-the-go product.

For all these reasons, Apple Watch Series 4 and AirPods 2 will make a great pair. Check out some cool renderings of the upcoming AirPods 2.