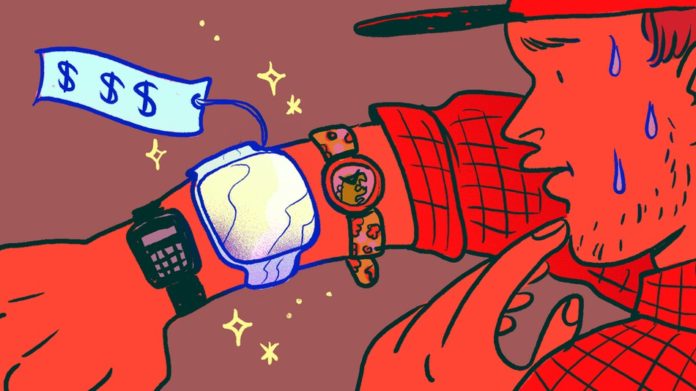 Even as Apple announced during its last quarterly earnings call that it will no longer share iPhone, iPad and Mac unit sales, the focus is gradually shifting to the Cupertino giant’s other products – literally.

Among these, Apple Services, comprising Apple Pay and Apple Music have been cited as the most promising future pillars of revenue support now that iPhone sales are looking softer and softer each year. But there’s another hidden gem that’s more than carrying its weight since it was launched nearly four years ago – Apple Watch. It is currently part of the Other Products reporting segment, bundled with iPod, Beats, Apple TV and Accessories.

Later this month, on January 29, 2019, Apple will be announcing its first quarter earnings for the quarter ended December 29, 2018. This is the crucial holiday quarter, and Apple stock has already been hit by the news of soft revenue growth. But what about the dark horse in this race – Apple Watch?

Selling well under 10 million units every quarter, Apple Watch isn’t exactly going to save the day for Apple. However, it has grown to be a predictable and future-ready part of their overall business. How many units of Apple Watch has the company sold since the product was first introduced to the market? Let’s follow the sales thread from launch until the end of the last reported quarter.

When it was first launched and made available to the public in April 2015, it quickly scaled the sales charts to hit 4 million units sold in the second quarter of 2015, technically Apple’s Q3 2015.

According to the quarterly report for the period, Other Products made approximately $2.64 billion in revenues, up from $1.69 billion during the previous quarter (Q2.) Much of that growth came from Apple Watch sales, which third-party sources count at about 4.2 million units in the quarter when the product was launched.

Apple only purchased Beats during the following quarter, or Q4, which means any revenue growth between Q2 and Q3 would exclude Beats sales. If we consider relatively stable sales for the other products in the Other Products category, such as iPod, Apple TV and accessories, it’s clear that Apple Watch drove much of that growth.

At the time, IDC reported that Apple Watch shipments were at around 3.9 million units for the quarter. Most analysts put it at between 3 million and 5 million units, which is a pretty close match. Research firm Canalys estimated it at 4.2 million units shipped.

Taking an average of 4 million and multiplying that by the starting price of $350, that amounts to about $1.4 billion in revenue, at a minimum. The revenue jump during the quarter in which it was launched was close to $1 billion, which means Apple sold fewer of the other products during the period in question, but segment revenues were ably held up by Apple Watch and, possibly, Apple TV.

Apple Watch sales held steady over the September quarter of 2015 as Apple Watch expanded into more markets. The Other Products segment reported about $400 million in sequential revenue growth over Q3. While that boded well for Apple Watch, some of its segment siblings clearly took a hit once again.

The majority of estimates put Fiscal 2015 Apple Watch sales somewhere between 15 million and 20 million units. Even at the starting price of $350, that’s between $5.25 billion and $7 billion in revenues. It’s still a drop in the ocean that was Apple’s overall revenue for 2015 – nearly $234 billion – but it was a significant drop for Apple nonetheless. It proved that Apple Watch was in the game to stay and compete against Android rivals like Samsung, FitBit and Garmin.

The fourth quarter of 2015, or the crucial holiday quarter ended December 26, 2015 (Apple’s Q1 2016), was one of the best for Apple Watch. So good, in fact, that the company put it right next to the iPhone at the top of their media alert (press release):

Even though Apple TV continued to sell well during the period, Apple Watch was now elevated to an esteemed position right next to iPhone. Estimates put Apple Watch sales at around 5.8 million units for the holiday quarter. The only problem was that the estimates varied wildly depending on the source:

Regardless of the wide range of estimates, one thing was undeniable: Apple Watch had come of age. By the end of Fiscal 2015, Apple Watch had sold at least 15 to 20 million units. The best was yet to come.

The first quarter of Fiscal 2016 was off to a great start where Apple Watch was concerned. But did it hold up for the rest of the year?

Cook also indicated that moving forward Apple Watch sales would be more seasonal, like the iPod. So, sales were not exactly disappointing, but they didn’t match up to the previous quarter’s performance.

In the third quarter of 2016 (June quarter), Cook took a different tone when he mentioned Apple Watch. Saying nothing about sales, he instead pointed to a JD Power survey and cited the high customer satisfaction rating. That’s not something you do when sales are on fire, which they obviously weren’t. The following quarter was even worse.

For Fiscal 2016 fourth quarter (September quarter), IDC estimated a gut-wrenching 71% sales drop on a year-over-year basis, with their figure coming it at 2.7 million units. Was this seasonality, as Cook said, or was the Apple Watch finally coming to the end of its line?

However, the next quarter bore out Cook’s projection from earlier that year. In the holiday quarter of 2016 (Apple’s Q1 2017), Apple Watch sales surpassed all expectations. Here’s what Cook said around the beginning of that quarter:

“Our data shows that Apple Watch is doing great and looks to be one of the most popular holiday gifts this year. Sales growth is off the charts. In fact, during the first week of holiday shopping, our sell-through of Apple Watch was greater than any week in the product’s history. And as we expected, we’re on track for the best quarter ever for Apple Watch.”

When the results of Q1 2017 (December quarter) finally came, Cook was vindicated:

“We sold more iPhones than ever before and set all-time revenue records for iPhone, Services, Mac and Apple Watch.”

By the end of the 2016 holiday quarter, Apple Watch Series 1 and Series 2 were released, and had a starting price tag comparable to their predecessor. But they had added capabilities because of watchOS 3, which brought the Dock, Activity sharing, the Breathe app and SOS, among other key features. Little wonder that Apple Watch sold well during that quarter.

The following quarter (March quarter 2017, Apple’s Q2 2017) saw Apple Watch Series 2 blaze through to the top of sales charts. It was back in the game with an estimated 3.5 million units shipped during the quarter (Strategy Analytics), a 59% increase over the same period in 2016, when only 2.2 million devices were estimated to be shipped. Apple Watch was now the best-selling smartwatch in the world.

During the same quarter, the Other Products segment had jumped 31% in revenues, with Apple Watch and Apple TV leading the way. Cook specifically said that Apple Watch revenue had doubled over the prior period, which was a validation of Strategy Analytics’ growth estimate of 59%. As a more mature product now in its second generation, Apple Watch was holding its own even after the holiday quarter.

In Apple’s Q3 2017 (June quarter) earnings call, Cook said that Apple Watch had sold 50% more units than the same quarter during the previous year. Sales were still holding strong, and Ben Bajarin from Creative Strategies estimated that Apple Watch sales during the June quarter were between 2 million and 3 million units. Was sales growth here to stay?

Then came the September quarter when Apple Watch Series 3 was announced. For the third time, sales grew 50% year over year. And the holiday quarter was yet to come. The market was much more conservative, only expecting a 20% YoY growth rate. Apple Watch had won yet again.

During the 2017 holiday quarter (Apple’s Q1 2018), Canalys estimated that Apple Watch sold a whopping 8 million units. Apple Watch Series 3 brought cellular capabilities, and it looks like the market was waiting to pounce on it.

Through the end of 2018, Apple continued to dominate the smart watch market. Apple Watch marketshare for 2017 was a hefty 53.1% in 2017, according to IDC. 2018 was off to a great start, with Apple’s smartwatch capturing a still-impressive 47.1% marketshare during the first quarter.

IDC says that in the first three years since its launch, Apple sold more than 44.6 million units, or more than half of all smart watches sold during that period globally. Data from Asymco shows a somewhat similar figure of 46 million units, with a 40 million to 43 million user base.

That was the estimate until the first quarter of 2018 (Apple’s Q2 2018), for which quarter Cook boasted “strong revenue growth in iPhone, Services and Wearables.”

Since then, iPhone sales seem to have plateaued out, and Cook has already warned investors to watch out for a soft Q1 2019. But Apple Watch seems to keep scaling new heights. The last reported quarter once again saw a 50% YoY sales jump for Apple Watch, with IDC reporting 4.2 million shipments over the prior period’s 2.7 million estimated shipments.

With Apple Watch Series 4 now in the game with stunning new features and capabilities like Bluetooth 5.0 support, sales are likely to be very close to or have already exceeded the 55 million mark. We’ll have a clearer picture when we get Q1 2019 revenue figures for Other Products, as well as estimates from analysts and research firms.

One thing is certain. Apple has found a real winner in Apple Watch. While it doesn’t sell nearly as much as iPhone every quarter, we have to remember that this is still very much a niche segment. But the future looks bright despite the fact that 2018 was seen to show a slowdown in the wearables segment as a whole. According to Ramon T. Llamas, research director for IDC’s Wearables team:

“The slowdown in the worldwide wearables market is a sign that this is a market in transition instead of a market in slowdown. Vendors are slowly moving beyond first-generation devices and experiences, bringing together an ecosystem of partners and applications for improved user experiences that reach beyond step counting. The wearables of tomorrow will play a more prominent role in communication, digital health care, home IoT, and enterprise productivity that will make last year’s wearables look quaint.”

Apple is seriously focused on the digital health segment with Apple Watch, and the app ecosystem around it is growing as well. New feature additions like the ECG app will continue to spawn new strains of health apps for Apple Watch. And sales will continue to grow at a healthy pace.

Cook has said many times that the company does not report Apple Watch sales for a reason – competitors want that data as much as analysts do.

“To be straight, I am not very anxious in reporting a lot of numbers on Apple Watch because our competitors are looking for it. So aggregating it is helpful from that point of view as well.”

Now that Apple Watch is clearly the market leader, will Apple start breaking out the Other Products segment, specifically for its wearables? That’s not very likely, and it might not be for the same reason that iPhone, iPad and Mac unit sales won’t be reported any more.

We don’t think Apple will readily offer information about Apple Watch sales at this point. The segment that it’s in is yet to be explored fully, and is still a drop in the ocean with $4.2 billion in revenues for the last reported quarter – Q4 2018 – against overall quarterly revenues of nearly $63 billion.

We don’t know if Apple will ever start reporting Apple Watch sales, but what we do know for sure is that Apple has found an able revenue pillar for the future. It’s small, but it is consistently growing in strong double digits, and Apple Watch is a huge part of that growth.