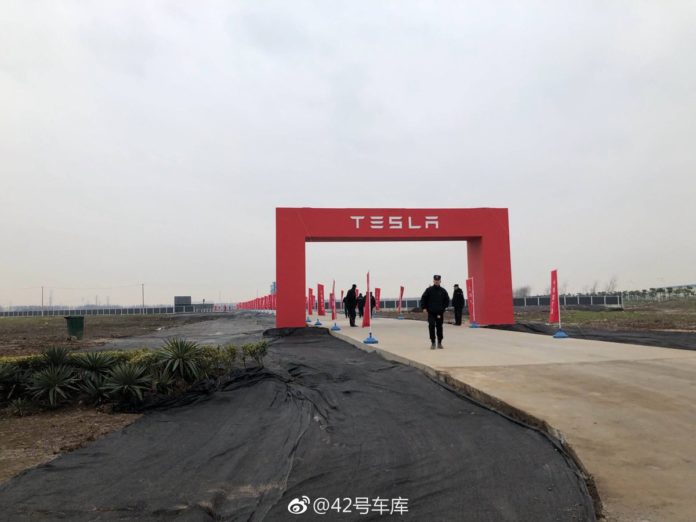 Tesla CEO Elon Musk announced today via that the electric car maker will build higher cost models of S, X, 3 and Y, in the United States, while Shanghai Gigafactory will exclusively focus on building affordable versions of Model 3 and Model Y for Greater China.

Tesla CEO Elon Musk made the announcement as he flew to China to break ground on the Tesla Shanghai Gigafactory.

According to the CEO, Tesla will be “aiming to finish initial construction this summer, start Model 3 production end of & reach high volume production next year.”

During his three day visit in July 2018, Musk signed a preliminary agreement with the Shanghai government to build Tesla Gigafactory in China. But things went into overdrive in the last three months, culminating with today’s groundbreaking ceremony.

August 2018: Shanghai government acts as a middle-man in negotiations with at least four state-owned banks to secure funding for Tesla’s manufacturing plan. Reuters reports that Tesla has started hiring in China, and the company was looking to fill 14 roles, including architectural designer and senior finance manager for its Shanghai Gigafactory

December 2018: The Mayor of Shanghai visits Tesla site in Shanghai, says Tesla has completed leveling the land and construction of Gigafactory 3 is all set to begin soon. G3 is “expected to be partially put into operation in the second half of next year.” he said.

Tesla registers a financial leasing company in China with a registered capital of $30 million.

The United States and China, the world’s two largest economies are locked in a bitter trade war. Though the game of one-upmanship is in suspended animation, no one in either administration knows where things are headed over the long term.

China’s decision to increase import tariffs wreaked havoc on Tesla’s sales in China which declined by nearly 27% in the third quarter of 2018.

Though Tesla managed to get closer to its sales guidance of 100,000 units of Model S and Model X in 2018, the electric car maker cannot afford to risk the future of its high volume sedan, Model 3, in the world’s fastest growing electric market.

The only way to insulate its products from import duty is to build them locally and the on-going trade war accelerated Tesla’s China plan from ‘lets start building in few years’ to ‘let’s start building something this year.

Though Tesla wants to start building cars in China as early as possible, the company will need plenty of time before it can crank up the production volume.

Tesla took nearly 18 months to increase Model 3 production from a of hundred cars every quarter to more than 60,000 units in a quarter.

The decision to hold back production of higher-end versions in the United States allows the company some wiggle room to play with its margins.

Tesla will be in a better position to absorb import tariffs and transportation costs on high margin (higher-end) models compared to low margin (lower-end) models.

This allows Tesla to balance its production capacity with demand and more importantly it will help Tesla save some money without sacrificing volume.