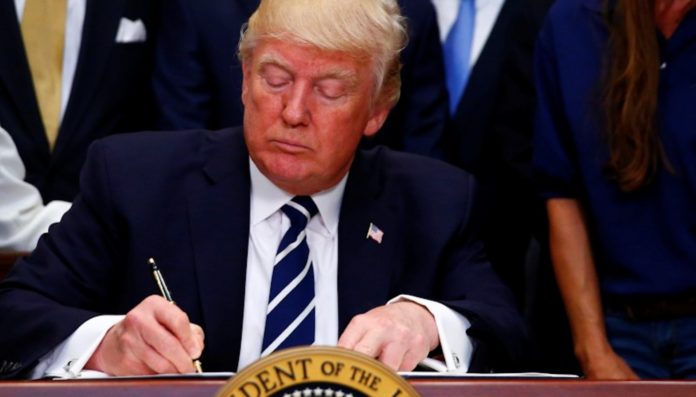 Earlier this month, on February 11, 2019, President Donald Trump issued an executive order called the American AI Initiative mandating federal agencies to leverage artificial intelligence, or AI, in their operations. While the order does mention that privacy protection is key, will forced adoption of AI open up back doors to privacy violations? That’s just one of many questions raised by an initiative that reveals massive holes in the (non-)existing framework for artificial intelligence development and deployment on a huge scale.

Any new initiative is typically met with resistance. Since Trump’s order directs federal agencies to collaborate with public and private entities, this could be just the catalyst we’ve all been waiting for. Several industries already adopt AI processes into their daily operations, but the American AI Initiative will force laggard industries into action. At least, that’s the hope.

Why is AI adoption not more universal across the commercial landscape?

One of the reasons, as we’ve seen, is resistance to change. But the underlying fear is not just a change of modus operandi. It is the fear of losing jobs to AI entities like robots and automated processes. Several AI experts have already warned of huge job losses to machine learning and deep learning programs that automate what humans currently do, and there is now a new fear that forcing federal agencies to reallocate funds towards AI implementation could exacerbate the problem.

To be clear, the government isn’t giving any additional funding for this initiative. It is merely a mandate to infuse more AI-related technologies so agencies – as well as public and private sector entities – can compete in the international arena.

In an attempt to quantify that, the 2017 World Robot Statistics, issued by the International Federation of Robotics (IFR), reveals that the United States is behind countries like South Korea, Singapore, Germany and Japan in terms of the number of robots per 10,000 employees in the manufacturing sector.

While the U.S. is far above the global average in this regard, there are industries such as legal that are far behind in AI adoption. Again, one of the fears of many law firms and ancillary industries is that AI will take away human jobs.

The fear is not completely unfounded. Recent work by law students and companies show that AI programs are more accurate than human lawyers when it comes to predicting certain things, such as spotting risks and exposure in non-disclosure agreements (NDAs) and predicting the outcome of insurance claims.

A lot of the work at legal firms is repetitive and pattern-rich, which is perfect for machine learning algorithms to quickly learn and master. In the case of the NDA reviews, the AI program was able to complete reviewing a contract in 26 seconds. A human attorney took 92 minutes.

Forcing change in such an environment could have unforeseen repercussions. The American AI Initiative doesn’t actually provide a framework for AI development or implementation save for a few overarching guidelines that fall far short of an actual blueprint for the future.

The details are scant, bringing further ambiguity to an already cloudy AI landscape. For example, there’s no mention of what cloud resources will be made accessible to AI researchers in the private and public sector, nor is there any clue to how federal agencies will “prioritize investments” in AI R&D.

In fact, it is even less comprehensive and articulate than the 2016 Obama administration report on the various aspects of implementing AI on such a scale.

We merely showcased the legal industry as a case in point for how such a directive could blow up in our faces. It’s going to be no different in any other industry you pick. Unless there’s a clear framework to go with any mandate, executive or otherwise, companies and even federal agencies will be left to their own devices.

This could mean divergent and contradictory policies being implemented in silo form, and private and public sector companies will just have to pick and choose the resources that are haphazardly made available to them under this arrangement.

One saving grace of the order might be the establishment of standards, but there’s a lot of ambiguity in developing “reliable, robust, trustworthy, secure, portable, and interoperable AI systems.” The National Institute of Standards and Technology (NIST) has been given the responsibility of making sure such systems are developed, which leaves it open to interpretation because it doesn’t employ a collaborative approach. Are we going to see an FTC-Net-Neutralty-type story unfold all over again?

Another point to note is the fact that AI talent shortage is at an all-time high. With President Trump’s stand on immigrant workers vis-a-vis visas (whew!), we might be looking at a brain-drain right at the time when immigrant talent is most required. How does the government plan to meet this growing need for AI talent when domestic resources are clearly insufficient to fulfil current open positions in the field of data science and artificial intelligence?

To give you a snapshot of the magnitude of this problem, here’s what the chasm between demand and supply looks like right now:

With uncertainty escalating among skilled workers from countries like India who depend on H1B visas, the executive order only puts more pressure on a talent pool that’s already being outstripped by demand at an alarming rate.

There are several more factors that are related to the mandate that haven’t been made explicit yet. According to Michael Kratsios, the White House Deputy Assistant to the President for Technology Policy:

“The American AI Initiative will build on this success by leveraging our R&D ecosystem of industry, academia, and government and prioritizing federal investments of cutting-edge ideas that can directly benefit the American people. An integral part of the initiative will include federal agencies developing AI R&D budgets to support their core missions.”

The success he refers to in that comment is that “America has been the leader in AI from its inception.”

Is that still the case, when we know that Chinese companies like Tencent, Baidu and Alibaba, representing a combined market share of over a trillion dollars ($1,000,000,000,000), are already heavily invested in AI, and China itself has greater capabilities to build supply chain pipelines to support the growth of AI?

Consider just one area – electric vehicles. Is there a nationwide charging network controlled by the government, or even adequate funding or direction in that area? Is there a coherent federal initiative for developing superior battery technology? On the contrary, phasing out federal tax credits for buyers of EV brands that have crossed the 200,000 cars sold mark, for that matter, is actually counter-intuitive to developing an EV-friendly market. There’s no comprehensive strategy for electric vehicles where the government is concerned.

China is exactly the opposite in that respect. The nation as a whole is driving towards an EV future, and has already crossed the U.S. to become the largest EV market in the world.

Are we already at that point regarding AI? If you’ll notice, Kratsios’ reference to U.S. leadership in the field of AI is in the past tense – “has been.” That might no longer be the case. Countries like Singapore, South Korea and Germany already have comprehensive AI development and deployment strategies in place. The U.S. is only getting started, and the American AI Initiative is merely a first step towards creating one.