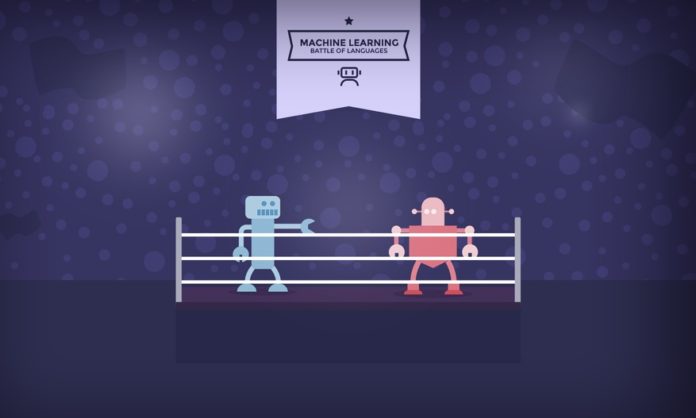 As machine learning, deep learning and other artificial intelligence technologies race to the forefront of scientific and commercial development, it is becoming increasingly important for the younger generation to be educated in the ways of AI. In other words, programming languages most suited to AI R&D and implementation.

To that end, we’ve compiled a list of the top machine learning languages use to program AI systems. This is the core education required for tomorrow’s AI programmers and data scientists. This invaluable learning will prepare you today for the world’s needs tomorrow. Oh, and you’ll get a hefty salary doing it!

Python seems to be the most widely used language for machine learning. It’s fast, easy to learn and easy to deploy. The massive developer community around Python means it has impressive library support that includes ones like Pybrain and Numpy. Google Brain’s TensorFlow is probably the most famous deep learning Python library in existence today.

As a language for programming machine learning systems, Python clearly tops the list by a wide margin.

The R programming language is ideal for machine learning because of AI-specific libraries like Tm, Gmodels, RODBC and Class, to name just a few. These packages help the programmer quickly implement machine learning algorithms that are specific to business problems. This tremendously increases the value of this language.

In the world of data science, R is perfect for statistical analyses that are the foundation of AI algorithms. As such, it offers R developers ample opportunity within business intelligence divisions of large organizations. As such, it is a must-learn language for any aspiring data scientist.

While R is not as easy to learn as Python, it does match its top AI rival in terms of width and depth of application with respect to data visualization, data analysis and statistical analysis.

Lisp is the second-oldest high-level programming language that is used widely throughout the world, and is younger than Fortran by a year. It was specified in 1958 by the founding father of artificial intelligence, John McCarthy, and has evolved into a number of popular dialects like Common Lisp, Scheme and Clojure, each of which in turn has multiple implementations. Common Lisp, for example, has over a dozen different implementations.

One of the elements that took away the uniqueness of this language is the fact that a lot of its features have been migrated to other high-level programming languages. However, Lisp saw a resurgence that began in 2000.

There are several views on C++ being the ideal language for machine learning and neural networks, but one strong point supporting its use in this area is the speed of execution. Machine learning is a CPU-intensive process, and C++ is much faster than Java or C# in that regard.

Practically speaking, the preference of C++ over C# or Java depends on several factors, such as the JIT compiler being able to query your machine for optimizations that a compiled C++ program cannot.

In general, however, the efficiency, level of control and high performance are major reasons why C++ is preferred in games development and robot locomotion. This is directly related to the sophisticated libraries that are specific to AI.

Java is generally prioritized by front-end desktop applications developers as well as for enterprise-level applications. For example, it is widely used in areas like cyber attack detection and customer support applications, as well as fraud detection tools used in the banking and financial services sector.

Java is ideal for large-scale applications. One famous use case is Twitter, which switched their front-end servers from Ruby on Rails to Java for its search engine. In 2011, Twitter switched to a Java server called Blender, and these are the results as posted on their blog:

Java offers faster development times and the ability to built custom tools quickly and efficiently. Speed as well as scalability seem to be the tipping factors for choosing Java even over Python.

JavaScript is not far behind, and most developers have found that open-source frameworks like TensorFlow.js and Keras.js are ideal for JavaScript developers who are trying to make headway in machine learning.

These frameworks allow developers to run their machine learning programs right from their browsers, making it easy for a JavaScript developer to delve into ML, or an ML expert to start using JavaScript to train and deploy ML models in their browsers.

JavaScript is more ideal for full-stack development since it can be used at the back-end as well as a front-end language. In addition, NodeJs is based on the Chrome V8 engine, which itself is a JavaScript engine. Since V8 directly compiles JavaScript directly to machine code before execution.

Despite what anyone says, there’s no such thing as the best programming language for artificial intelligence. The choice of language depends on multiple factors pertaining to the business problem at hand. Unless a particular AI algorithm solves a specific problem faced by a business or a consumer, its adoption is not going to be wide enough to be sustainable.

From that perspective, picking the right language requires understanding the purpose of using ML or deep learning in specific cases. It is also a question of what language your company prioritizes, since significant investments will have been made in specific technologies that are best suited to certain languages.

Our advice is not to jump in with both feet, but have a balanced view of the various languages. Try and learn as much as you can about each programming language, what libraries are available, what frameworks work best for ML programs and so on.

Such a balanced view will enable you, as a programmer, to take advantage of a constantly shifting software landscape and help you avoid the major pit fall of your skillset becoming obsolete down the road.