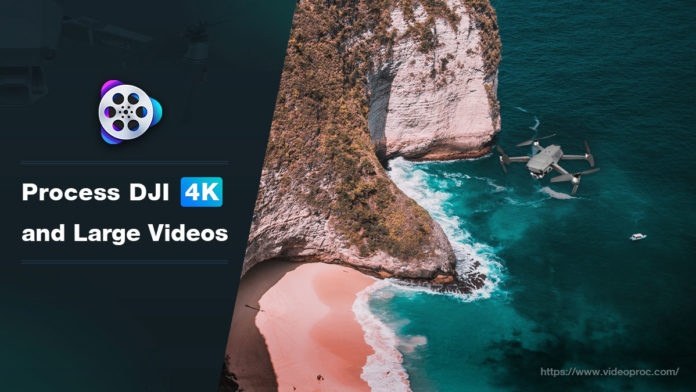 Shenzhen Dajiang Baiwang Technology Co., Ltd., better known to action videography enthusiasts as the creator of DJI drones and its underlying technologies, makes some of the world’s best drone camera systems in existence. Boasting advanced camera stabilization features and superior quality of video capture, its stellar line-up of products includes the iconic Spark, the ultra-professional Phantom series, and the fun-to-fly selfie-takers’ favorite, the Mavic Mini. But even DJI 4K videos aren’t perfect, according to several user posts in popular DJI forums. Thankfully, a simple but powerful utility that costs a fraction of Adobe Premiere Pro or Final Cut Pro X can come to your rescue. More about VideoProc a bit, but what exactly are these issues faced by DJI drone and camera users?

Listed below are some non-isolated cases of the most commonly reported issues.

Despite a Gimbal and IMU calibration as well as a refresh of aircraft firmware, the user’s videos continued to be shaky; it was reportedly a sudden occurrence that started six months after purchasing the Phantom 4 Advantage, and with just a few flights done.

One user reported that one of his videos edited on DJI Go suddenly went into slow motion after about 10 seconds, and for no apparent reason. One commenter on that thread suggested finding a decent desktop video editing software, which solved the problem for the user.

Playback Speed from Normal to Fast at Random:

A Spark owner reported that a video he took suddenly went into fast mode. A thread reply later, he realized that he was watching the 10-second version of the video, called a Quickshot!

The reason we’re giving these specific examples is that, sometimes, it’s the user’s lack of knowledge or the right technology to fix the problem that’s the real issue. By and large, DJI videos are phenomenally superior to most other options, but it’s possible that in some situations, simply having a proper desktop video editor for DJI videos would have solved the issue, as the commenter insightfully pointed out in the second instance above.

How to Choose the Right DJI Video Editing Software

We don’t all have the luxury of spending hundreds or thousands of dollars on software for our drone videos. For many of us, it’s simply a fun hobby to engage in. Unfortunately, the cost of some pro-level video editors is so prohibitive that even serious amateurs looking to go professional find it to be a deal-breaker.

Enter VideoProc, a pro-level DJI video editing software to blow many professional video editors out of the water. The company behind the product promotes it as an affordable professional video editor that gives you solid value for your money, and that goes a long way in building a strong following. VideoProc for Windows and Mac can be your constant companion because you can not only edit and convert DJI videos but also audio-visual media from a gamut of video capture devices like camcorders, GoPro cameras, iPhones and even converted 4K videos for YouTube that you take with your webcam.

In short, VideoProc can resolve most software-related issues and several hardware glitches with respect to DJI videos and other such media. We’ll show you three specific video editing and conversion features related to the common user issues we touched on earlier, but VideoProc’s repertoire goes beyond and into screen recording, video downloading, and more. Let’s take a closer look at what the product can do.

In video editing mode, you can adjust the speed of the video manually with the slider in the Audio & Video section of the video editor window. See image below:

This feature would have solved the problem of the video suddenly going into slow motion. The conversion feature in VideoProc could have been used instead of DJI Go to convert the video for sharing.

The second feature highlight is the selection of effects and filters to process DJI videos. The Sharpen tool, for example, is perfect for dealing with blurry or shaky shots and shows considerable improvement when you process a video with this filter. You’ll find it in the Effects tab of the video editor.

Look at the fine detail that’s visible after processing an MP4 clip from the popular TV series Suits (image below.) The arrows show the Sharpen tool to good effect.

That’s a screengrab from an actual edit-in-progress, by the way, so consider it a real-world example of how effective VideoProc can be in terms of being your go-to DJI video converter and editor.

The third tool is actually two modules: Deshake and Denoise. While the first one applies additional stability to shaky videos, Denoise can unclutter the audio file of your GoPro and DJI videos.

VideoProc is fully 4K ready, meaning it can convert to and from 4K and is the perfect tool to handle large DJI videos in ridiculously high resolutions, not to mention large video files containing hours of footage. What gives it this power is the full GPU acceleration capabilities of VideoProc. The software can leverage your computer’s hardware resources for decoding, processing, and encoding, and the options are fully customizable.

Are you feeling lucky? You can process a DJI video for free and try your luck for the special license giveaway from VideoProc for a limited time. Fortunate visitors will see a license code above the download button for VideoProc. All you have to do is watch the tutorial video to activate the license and you’re good to go!

We’ve already seen the cost advantage of VideoProc over premium desktop video editors. To elaborate, compare paying US$239.88/yr for Adobe Premiere Pro versus $78.90 for a lifetime Windows or Mac license for VideoProc, and it’s practically a no brainer. Moreover, the actual price you’ll pay is $35.95 after discounts and a special coupon.

The real advantage here is not just the price but what you get for what you pay. Sure, Adobe will garland you and welcome you to its fold with open arms, but most of what you pay is for the brand value of Adobe as much as it is for the functionality and value you get in exchange. Some might argue with that point of view but the large price gap vs. the much smaller features gap is undeniable.