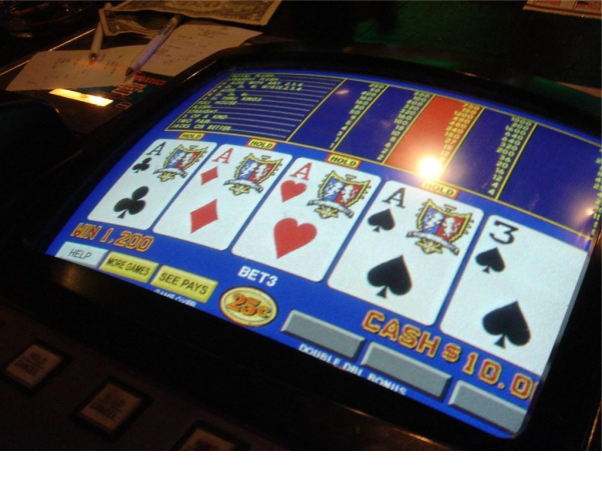 If you have been to Las Vegas and had the chance to walk through some of the plush gaming floors of ultra-modern resorts like the Aria and Cosmopolitan, you will have undoubtedly passed some video poker machines. They are, in fact, everywhere in Las Vegas, including being built into the bar tops in the areas away from the gaming floor.

But video poker is positively… let’s say, retro? If you aren’t familiar with the design of the games, you should picture something that was designed on a 1980s computer, with very basic graphics and limited gameplay. Sure, the casino industry is one that values traditional entertainment; games like blackjack, roulette, and baccarat have not changed at all over the decades. Yet, when compared with other virtual games, especially modern video slots, video poker looks like a throwback to a bygone 8-bit era.

Video poker has been around for a half century

And yet, 50 years after Dale Electronics created the first video poker machines, the games are still hugely popular at casino resorts and online. The latter especially is interesting, given the 100s of rival games found at internet casino sites. Nevertheless, a full selection of poker online is a requisite part of a top casino in 2020. But why does the game hold its popularity? After all, with the other options on offer, it’s a bit like Tetris being the most popular game on the new PlayStation 5.

We can muse over a few reasons. The first being the simplicity of video poker as an attractive feature in and of itself. We mentioned above that you will find video poker machines built into the bars away from the gaming floors at casinos. That’s not surprising in Las Vegas, but the choice of video poker, as opposed to other casino games, is deliberate. The idea is that it does not tax the brain like other games, and thus customers can have a few hands while waiting for their martinis to be shaken up by the bartenders.

The lure of the simple should never be underestimated, and you can see why video poker fits the bill nicely. Most casino games, even modern slot machines, encourage you to make risk-based decisions every few seconds. Video poker is a little more relaxed. Sure, poker is one of the great strategy games, but the way video poker plays is designed to remove those decisions. In short, it’s one of the most relaxing casino games.

Video poker has a generous RTP

We can look at a more technical reason for video poker’s sustained popularity – its rate of payback. Virtual games work on a metric called RTP – return to player. This is like a software-based house edge, which means the game will pay out a specific amount over time. Video poker games are often at the higher end of this, with many coming in at over 99%. If we compare this to, say, slots, which usually come in around 93-96%, then it’s clear video poker offers an advantage. This is something experienced players will be aware of.

Why does video poker pay back more than a slot machine? Well, one thing that is often overlooked in these discussions centre around overheads. Suppose you take a slot game like Playtech’s Justice League, which is based on the DC Comics/Warner Bros. film. Playtech would have to pay Warner Bros. a huge chunk of money to license the imagery from the movie, perhaps even paying royalty amounts to actors like Ben Affleck and Henry Cavill, whose images are used in the game. Video poker doesn’t have that issue – the overheads are much lower, so it can afford to pay back a greater percentage of what it takes in.

If you have visited a casino or played online, it might be difficult to envisage just how much video poker sticks out with its retro look. Modern games feature 3D graphics, live video, and interactive features. Video poker, meanwhile, remains popular with duo-chrome design and simple charm. And, it doesn’t seem to be going anywhere.