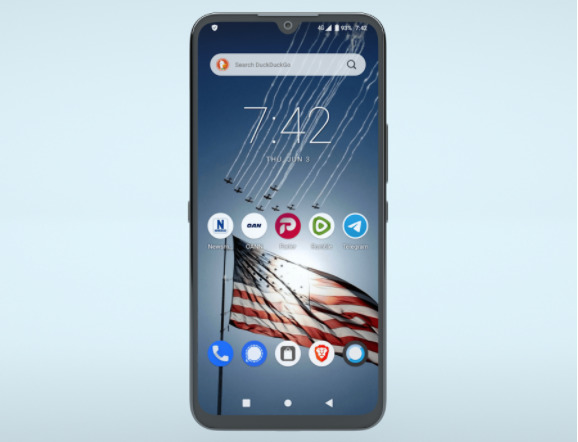 If you haven’t yet heard of it, the Freedom Phone is a much-hyped new device that promises “free speech and privacy” to its users. Funded by Erik Finman, the self-made Bitcoin millionaire who bought $1,000 worth of the cryptocurrency when it was just $12 a coin. That investment was made when Finman was 12; by the time he turned 18, he was a millionaire. Now 22, Finman is promoting the Freedom Phone as “a free speech and privacy first focused phone. With features like tracking blockers and an uncensorable app store.”

Critics (mostly security experts) say that the phone is little more than a re-vamped budget phone from China but priced like an iPhone XR. Very little is known about the features or even the OS at this point but the phone is clearly being marketing to ‘conservative America’ as a device that is all about “Not just making America great. But also making a great phone.”

The Freedom Phone website offers very little information but is loaded with Buy buttons. The site promotes high-level features such as tracking blockers, an “uncensored App Store”, “Pre-loaded Apps”, a mobile OS based on free speech, “Large Storage”, a 6-inch screen, easy phone switching, etc. but fails to go any deeper into the actual specs of the phone or the operating system.

Although the site claims that the device ships in August, it’s surprising that not much information is available about the device or its performance so close to its release.

Some speculate that the phone is merely a bid by a newfound millionaire to take advantage of conservatives who are irked by ex-President Donald Trump being blocked from social media platforms like Twitter and Facebook. Although Trump is slowly losing support within the party, millions of Americans are still behind him:

We don’t know what the pre-order levels look like with the Freedom Phone, but we suspect that it’s not entirely an unpopular device among conservatives who still expect Trump to make another bid for the White House. Even celebrities like Caitlyn Jenner, ex-Olympian and gubernatorial candidate for California, have pledged their support should he decide to run in 2024.

As for the Freedom Phone itself, there are too many questions left unanswered, such as whether or not it works with 5G networks, what kind of internal specs it offers, and what the specific privacy implementations are. Should you buy it? Well, if you have $500 to burn, go for it. However, since none of the critical information we typically use to assess the worth and value of a phone is available, we don’t recommend it.

From the image, it looks like any other budget Android phone. Is there more to it than that? Follow this story on 1redDrop as we track the story around the Freedom Phone.