Home Business Everybody Thinks Facebook Growth is in Deep Trouble. What is the Real... 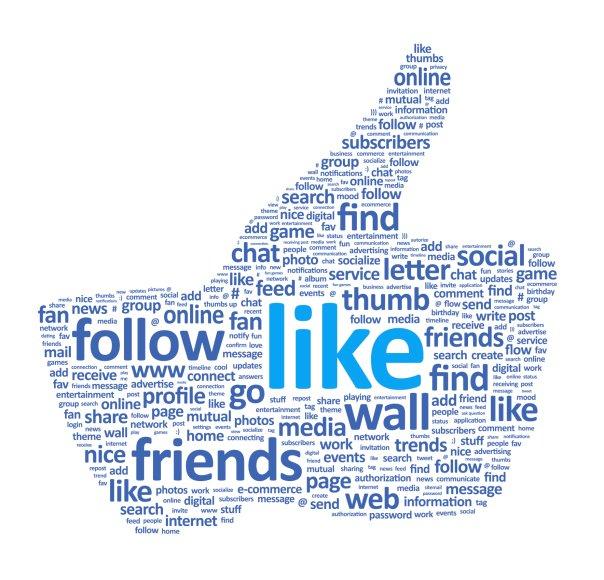 Facebook’s blowout third quarter results didn’t really help the company’s market capitalization to move up, but instead helped it move down a notch. When the stock price moves down after a company posts a 59% quarterly revenue growth, then there must be some real concerns about the future growth of the company that made the market react with such indifference to the stellar results.

Facebook is, in a way, a huge victim of its own success. The social media giant’s quarterly revenues have been growing at solid double-digit rates for the last few years, and the company has been doubling its revenues at an almost alarming frequency.

Why did the market show such a surprising reaction when the company forecast slower growth in the quarters ahead? To answer that question, we need to dive deep into Facebook’s numbers and see how they’ve gotten to where they are.

Facebook is a social media platform. They do have other products such as Instagram and WhatsApp but, so far, their main platform has been carrying the company on its shoulders. The company makes it money by selling advertisements, though there has been some serious effort from the company to create alternate revenue streams. One example is the recently launched Facebook Workplace, an intra-inter company communications tool build on top of Facebook for which the company charges by the number of users.

But those efforts are going to take time to bear fruit, and Facebook will have to depend on advertising revenues for many more years to come. For Facebook to keep increasing its ad revenues the company has to do three things, which they have been doing in an excellent manner for the last three years:

We’ll be getting into a lot of detail with their user base growth – point 1 of the list above – so let’s first look at their average revenue per user, also known as ARPU.


Facebook can increase average revenue per user by doing two things. The first is to increase the number of advertisements shown per user. Obviously, there’s an optimal limit for this parameter so they can’t increase it beyond a particular point. The second way is to increase the rates they charge advertisers. That’s primarily under the influence of the pull and push of market forces such as demand, the competition’s rates and so on. That’s got an upper limit at any given point in time as well.

These two items are critical factors that cannot keep growing forever, and they will stabilize sooner than later at a level where they can only increase organically. Now let’s look at the actual numbers Facebook has been putting out on this front.

Facebook’s worldwide ARPU has increased 35% in the last twelve months, and 67% in the last twenty four months. The problem with growing so fast is that it makes it that much harder to replicate year over year. So, while Facebook is looking good to double its ARPU in a span of three years, that will make it practically impossible for the company to do an encore over the following three years. They can neither keep increasing the number of ads nor the advertising rates indefinitely.

Another way to increase ARPU is to increase the average amount of time that the user spends on the app. The longer they remain on Facebook, the more ads they can be served during that time. And that’s the direction Facebook has been pushing in with new features and services that the company has been launching these past few months.

It certainly is a great strategy to follow but, again, we strongly believe that these things will need time to take root, grow and then start yielding results. Stable growth is definitely possible with these measures in place, but gravity-defying double-digit growth? Not so much.


And that leads us to the all-important question of user base. How many users can Facebook keep adding, and for how long? Is there a saturation point after which user growth will taper off? Can they keep growing in developed markets after that point? How does rapid growth in emerging markets affect other metrics like ARPU?

Facebook’s real shot at sustainable long term growth in terms of revenues lies in its ability to expand its userbase. By the end of third quarter 2016 Facebook’s monthly active user base stood at 1.788 billion. 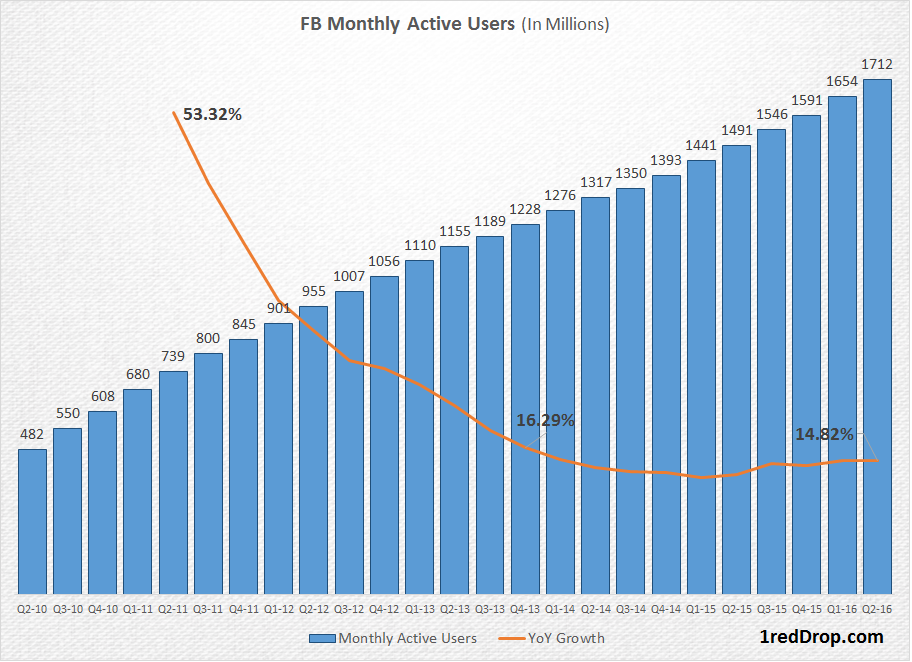 So how far can they grow from here?

At the time of writing this article the world population clock was showing 7.46 billion people. Obviously, the potential market for Facebook is a lot smaller than that. Even if you take the total market potential for social media at around two-thirds of the world’s population, that’s about 5 billion people.

Even achieving 100% of the potential market is an impossible task for any company, and even more so for a social media platform whose reach is limited to the portion of that market that has internet access.

Developed countries such as United States, Canada, Japan and United Kingdom are either at or above 90% internet penetration level, while highly populous countries like China and India are barely at 50% levels.

Facebook’s momentum on the user base front has already slowed down in the United States. In the last two years, Facebook’s monthly active user base has expanded by 23 million in US and Canada, while the company added nearly ten times that in the Asia Pacific region. The total population of the United States and Canada combined is approximately 360 million. At 90% penetration, Facebook should be able to reach around 324 million people.

It’s no big surprise, then, that Facebook’s user base grew at 11% in North America while they grew in excess of 38% in Asia Pacific and the rest of the world.

Facebook is well aware of this problem, and that’s why they’ve been trying to woo China for the longest time. But even the antics of Zuckerberg learning Mandarin and trying to get the Chinese premier to name his daughter haven’t worked, so Facebook’s charm initiatives aren’t likely to work in this tough market. The Chinese desire to be in absolute control over media communications within the country isn’t something Facebook’s model would embrace, and Facebook’s model isn’t something China may ever embrace. There’s your stalemate right there.

Across the Himalayas, in India, Facebook’s charm attacks have done reasonably well, but their efforts to offer free internet fell flat on its face because it was merely a backdoor attempt to take control of bandwidth, which was against the very grain of net neutrality.


Nevertheless, at least India offers Facebook an open market and a level playing field in which to grow. And, at the current 35% internet penetration level, India could be a huge growth engine for Facebook’s user base.

Where is the Growth Going to Come From?

In summary, user base is going to be critical to their revenue growth, but that user base expansion is now only going to come from the poorer segments of emerging markets that are only just getting access to the internet – the worst possible prospect for a company that’s focused on increasing average revenue per user across the globe.

So, while user base growth is certainly important, Facebook is going to find that it has to come back to developed markets for real growth. That can happen through newly monetized products and services, which will enable ARPU growth without the need for user base growth. And this is the area I think Facebook should be focusing on for the future.

They’ve been doing it for the past couple of years, getting into video, buying up VR assets, launching standalone apps and even trying to get into the enterprise productivity space through Facebook Workplace.

The only problem is, they’re a little late to the video race, their VR brand Oculus isn’t really a shining example of a blockbuster investment, their standalone apps aren’t yet bringing in significant revenues and they’ve got monsters like Microsoft and Google to deal with in the workplace productivity space.

And that leaves us with the biggest question of all. Where is Facebook’s future growth going to come from? What new product or service can Facebook think up that will take the world by storm the way their original idea did? That’s a question facing Google’s parent company Alphabet as well, but we’ll get into that in another article very soon. For now, I’ll just leave you with this…

What is Facebook going to do over the next five to ten years that can double their revenues to $34 billion and then double that again to $68 billion?