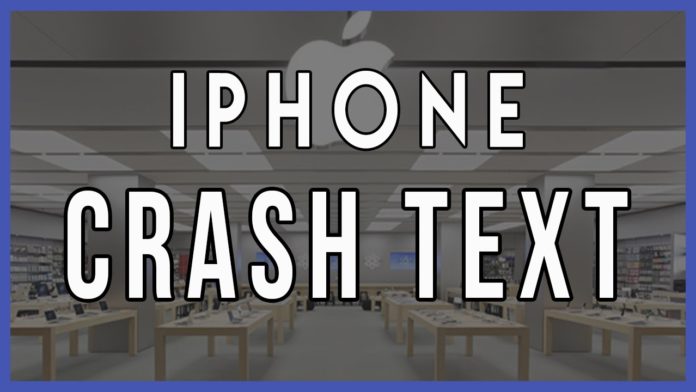 Yet another iPhone text bug has surfaced that scares iPhones running any version of iOS 10 so much that it freezes them. Once you get this message, nothing you do will make your phone respond. Fortunately, there’s a way to deal with it so you can get on with your life.

The culprit is a text message made up of a string of particular characters that somehow confuses iOS 10 devices and causes them to freeze. It’s very simple to create, but it’s a pain in the neck for anyone to receive because they don’t even have to open the text message for this hack to work. Simply type out a message with a white flag emoji, the digit “0” and a rainbow emoji.

For some reason, this iPhone text bug confuses your iPhone running iOS 10.x (it works slightly differently on each version of iOS 10.) Nothing will work, including the Home and Power buttons.

The worst part is that this simple text message will crash any application that you paste it into, including your mobile browser and Spotlight!

There are essentially two hacks to generate this iPhone text bug. The first one described above is the text string with emoji. That works on all iOS 10 – iOS 10.1.1 devices. (Un)fortunately, you can’t forward this message to someone else after you fix your own iPhone, but the video shows you how to generate the same text string using your iCloud Notes account on a Mac PC. This first method also does not work on the lock screen. The phone has to be unlocked for the hack to work.

The second works on every version of iOS 10 right up to the newly released iOS 10.2.1 beta. It also works on the lock screen, unlike the first method, and can be generated without the use of a computer. In fact, even though you can generate the text through iCloud Drive, it can even be generated from an Android phone! It’s more vicious than the text message and it works on all versions of iOS 10.

Fortunately, there’s a video from EverythingApplePro on YouTube that shows exactly how this new iPhone text bug works and how it gets fixed.

Watch the video so you know not to panic if someone sends you this bug.