Amazon sellers in the UK are being warned not to “promote, suggest the facilitation of, or actively enable the infringement of or unauthorized access to digital media or other protected content”, and their target is very clearly Kodi, arguably the most controversial media streaming software application in the world. 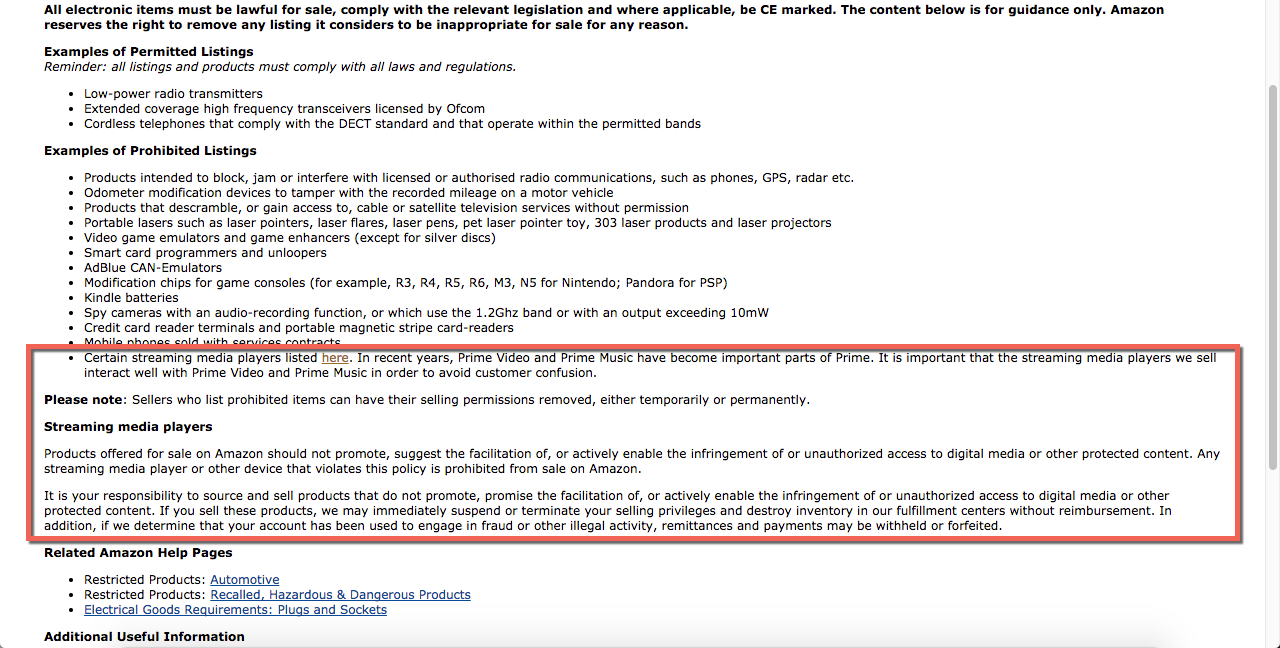 Kodi Box is extremely popular around the world because the open-source software on it – currently Kodi 17.1 – allows users to stream videos and other media from practically anywhere. This has led to a plethora of third-party add-ons that stream pirated content to the device, putting the user at risk of violating copyright laws.

While it’s primarily a software-based technology, the legal problems around Kodi Box have come about because of these add-ons, over which the Kodi team exercises little control. That’s why Amazon has used “the facilitation of” as part of its legalese against the sales of Kodi boxes.

The new crackdown effort in the UK is an echo of the device’s controversial story in the United States, and it’s not just Amazon creating all the buzz. The UK government is putting its weight behind the ban on Kodi as well, by pushing through the Digital Economy Bill that intends to punish uploaders as well as downloaders of pirated content with up to 10 years of imprisonment.

Thousands of UK residents have a Kodi box of some sort, and since the software can be mounted on virtually any streaming hardware – even Amazon Fire TV sticks often have the software sideloaded on to them – it is extremely prolific. The fact that it can be loaded on to mobile devices running on iOS as well as Android without the need for a jailbreak (iOS) or rooting (Android) makes its proliferation even harder to control.

The really interesting part is that most users of Kodi aren’t even aware than the third-party add ons they have are illegal because they stream content that isn’t paid for, and is therefore a violation of copyright punishable by law in most countries.

The UK government is now trying to make it as clear as possible that using any media streaming device to download or view pirated content could mean imprisonment for the user.

Amazon is right behind them with its severe warning to sellers, but can it really control Kodi? The fact that Kodi is a software rather than a streaming device (any hardware with Kodi can be called a Kodi box) makes it all the more difficult, and that’s exacerbated by the fact that Kodi itself is open-source and freely available.

It’s Napster all over again, but this time it’s about video, games, live TV and other media. Napster, however, was a company and a service, so it sort of ran aground and morphed into other forms. But it did set the tone for others like LimeWire, Gnutella, eDonkey2000, Bearshare and others, many of which faded into the sunset as well.

Kodi, however, being open-source and essentially a piece of code, is much more resilient. Moreever, there are any number of VPN services that advertise the fact that they’re perfect for use with the software, like IPVanish, for example (by the way, don’t click on it – it’s an image, not an ad!):

Using one of these VPNs can effectively ‘mask’ your identity online so even your Internet Service Provider will find it extremely difficult to pin down the user’s location. With some users now receiving warning letters from their ISPs, people are naturally concerned about being spied on, which is further boosting the use of VPNs, Tors, proxies and other services intended to “spoof” their IP address. VPN apps can even be installed on iOS, Android, macOS, Windows and other platforms, as a matter of fact.

All of this makes eliminating Kodi usage a mite difficult, to put it mildly. Nonetheless, governments and companies alike continue their crusade against copyright infringement by targeting such tools that make it possible.

The “Great Great Britain Kodi Crackdown” has begun. How successful will it be? We’ll have to wait and see.