eSports is a relatively new gaming trend that is rapidly gaining followership across the globe, and it has already garnered tremendous popularity among gamers of all ages. Let’s look at some interesting eSports statistics that will take your breath away.

eSports is big money, and the industry hopes to approach $1.5 billion in revenues in the next two years and over $2 billion by 2023. As of 2018, it is expected to cross $900 million. At that size, you’d expect growth to have slowed down by now. On the contrary, growth is expected to maintain healthy two-digit rates through 2020 and beyond. 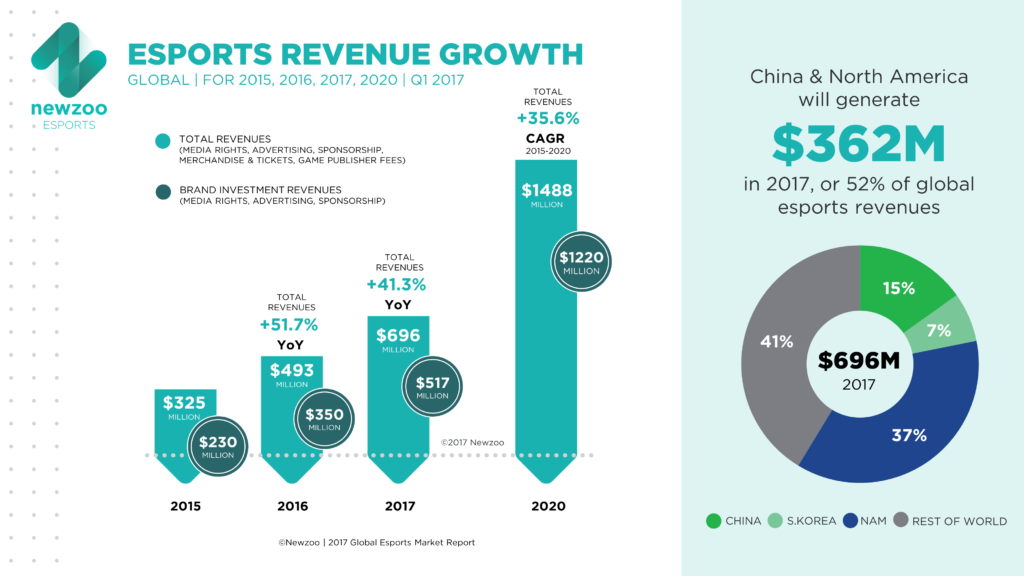 Investments in eSports are primarily made by major sporting brands, and it is an important growth factor. As of today, there are already over 300 million eSports fans around the world, and that number is growing fast. Investments are increasing as well. Earlier this year a brand new eSports arena was opened at the Luxor in Las Vegas. Boasting 300,000 square feet of space, the multi-level structure was built at a cost of $10 million.

eSports is quickly earning its right to be a major component of the overall gaming industry, which itself is a massive $115 billion segment. There are roughly 2.2 billion gamers in the world, which means one out of every three human beings plays online games!

Sports online games is yet another emergent phenomenon with massive support around the globe. In Canada, major changes are in the offing as the U.S. Supreme Court’s move to legalize sports betting earlier this year seems to be having positive repercussions on the Canadian sports betting scenario.

While eSports and sports betting are fundamentally different, the huge popularity and rapid growth of both segments show that the gaming industry is evolving into a new and exciting form. Throw cloud gaming and streaming game watching into the mix and what you have is a massive following of sports and gaming fans eager to eat up whatever the sponsors serve.

eSports is now taking its rightful place in the gaming world and continuing to contribute a growing amount of revenue to the overall pool. It might not be as big as the video game industry but, to be fair, it’s a lot younger so there’s nothing surprising there. The next ten years will be a critical time of growth for eSports to entrench itself firmly into the gaming community.

As it continues to strengthen its hold in the gaming market, there are clear signs that the potential for further growth is significant. Consider this: even though eSports only represents less than a percentage point of the overall gaming market, the nearly 400 million fans represent nearly 20% of the gaming pool. What does this mean? It means that there is a tremendous opportunity for growth in terms of brand promotions and backing from major corporate entities.

A great way to leverage this relatively new development is to invest in companies that have a vested interest in eSports. For example, NVIDIA (NVDA) makes GPUs for gaming systems, so their products will get a boost from the ongoing eSports phenomenon. The same goes for gaming companies like Electronic Arts (EA), Take-Two Interactive (TTWO) and Activision Blizzard (ATVI). Another lucrative investment could be Tencent Holdings, which currently owns – through its investment in Riot Games – the number two most watched game on Amazon’s Twitch platform – League of Legends.

There’s money to be made on all sides: sponsorships, media rights, games and even gaming hardware components. It’s clear that we’re approaching a tipping point for video gaming trends like sports betting and eSports, and anyone who invests at this point in time could be getting in on the ground floor of a massive multi-storied opportunity.