Tesla registered 6,836 Model 3 VINs today, taking the total number of VINs registered since the beginning of August to a whopping 30,719. To put that number in perspective, Tesla took nearly five months, from November 2017 to April 2018, to increase VIN from 3,840 to 33,719. In stark contrast, the electric car maker took less than 20 days in August to register 30K VINs.

Tesla Model 3 production has closely tracked VIN registration in the past and things are not going to be different now. 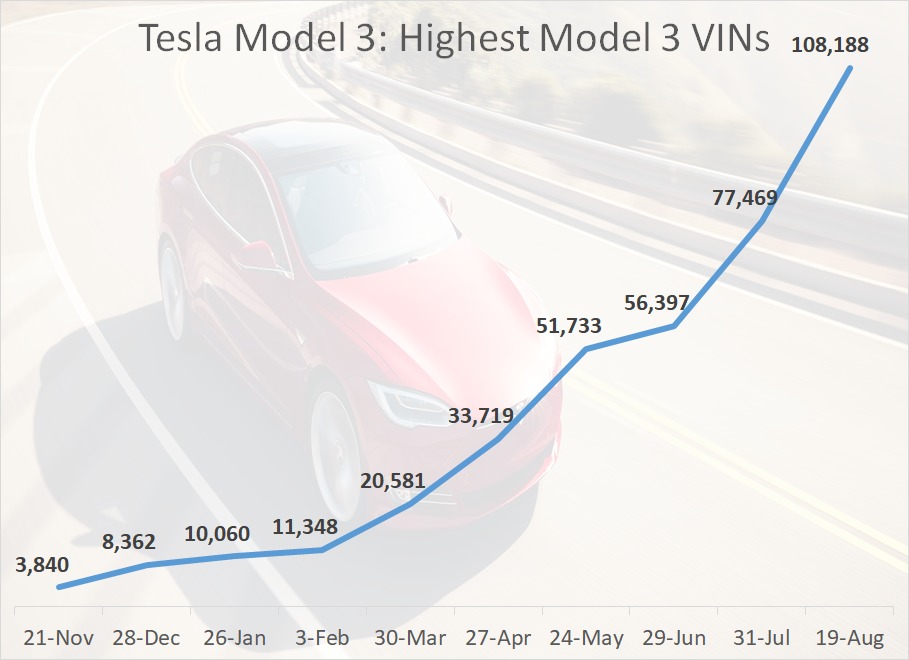 According to the Bloomberg Model 3 Tracker that estimates Tesla’s production numbers using VINs, the Elon Musk-led company has built 72,001 Model 3s since the time the company started production. The highest VIN registered as of today is 108,188. That’s a near 36K unit difference.

Even if we were to assume Bloomberg tracker to lag real production numbers, Tesla must be cranking up Model 3 production to get all the additional VINs to go through the production line in the next few weeks.

Tesla has guided for third quarter production of 50k to 55k Model 3s. Since the beginning of July Tesla has registered 51,791 VINs and we still have nearly six weeks left in the quarter.

If Tesla continues the brisk pace of VIN registrations, the Q3 earnings report or at the very least Tesla’s production statistics for the quarter is going to be Wall-Street-breaking numbers.

Updated to correct the timeline Tesla took to register the first 30K VINS.