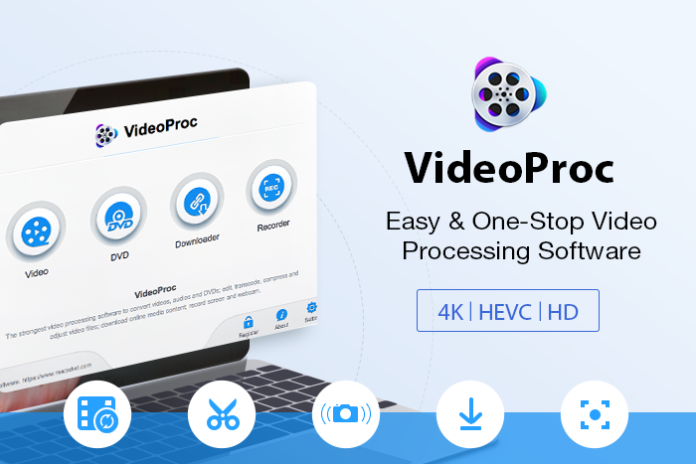 Imagine you’re traveling through the wild jungles of the Amazon Rain Forest or traipsing through the sands of the Sahara in sandals. You have your high-end 4K video recorder or premium smartphone running almost constantly, capturing the beauty of nature in all its resplendence. After all that trouble, you expect your travel videos to be as breathtaking to your friends and followers when they see your video on YouTube, right?

But then, you suddenly realize that these videos are HUGE; a 1-hour video in 4K is more than 318GB! You want to upload your 4K video to YouTube but the platform only allows 128 Gigs per video. So, now you’re stuck. You’ve got several hours of video on your recording device but the files are too large to upload without first editing them to 20-minute clips or converting them into a more ‘upload-friendly’ format. The other option is to optimize your video size with lossless compression. These are not simple tasks, which is where an application like VideoProc can come to your rescue.

VideoProc is a purpose-built Windows and Mac software utility that lets you quickly and effortlessly edit 4K videos for uploading to YouTube and other hosting sites, as well as share them through other means. Additionally, you can also convert your 4K travel videos into lower-resolution formats like 2K or HD and reduce the video file size by up to 90%, and it also works with an impressive array of audio and DVD file formats.

How VideoProc Can Help with 4K Video Editing and Conversion

4K is an awesome format but there’s a high price to pay in exchange for the stunning quality it delivers to the viewer. The price you pay is the fact that they’re cumbersome when you try and share them or upload them to a video hosting site like YouTube, Facebook, Instagram, and about a thousand more that are available to users today. That means your ultra-long travel videos need to be edited down to under 128GB before you can even think of uploading them. It also means you can’t use an off-the-shelf video editor. You need something like VideoProc to move forward with your upload or sharing plans.

The editing part is just one of the many things VideoProc can do. For example, it leverages your computer’s hardware to accelerate the processing time by an astounding 47X in a real-time environment! It allows you to edit and handle 4K videos on computers that don’t have high-end specs because of its modest CPU requirements. As a matter of fact, even though VideoProc works best with systems that have 2GB or higher RAM, you can actually edit a 4K video on a computer that only has 1GB of RAM. In addition, it supports up to 8K resolution all the way down to low-end formats like 360p, it can be used to edit audio and DVD file formats, it works with over 1000 video upload sites, all the major mobile hardware brands are supported, and there are more than 420 output formats to choose from when converting video, audio, and other files.

To be honest, we haven’t come across a video editor with such a wide scope of support and so many advanced features. The problem is that many of them don’t support super-high-res videos, most are meant for high-end processors, and the majority of them won’t give you the kind of input and output format support that VideoProc does. In fact, we couldn’t believe that it actually worked on low-end computers, so we put it to the test. The device we initially tested it on was an old MacBook Pro (mid-2012), and the results were pretty surprising. Here are some of the key features that helped VideoProc stand out from the crowd of video editors out there:

The process to install VideoProc is exactly the same as for any other third-party software for Mac. The DMG or disk image file you initially download is about 45MB and the software itself only requires about 200MB to 250MB. It’s not lightweight by any means but we felt it was a reasonable size considering some of the cool features of the software. The installation took a little longer than expected, but that’s only because the software proactively analyzes your system’s graphics and computing resources to leverage the hardware and make the product work in a smooth manner. In essence, what you get after installation is a custom utility that perfectly matches your computer’s hardware specs.

The VideoProc interface is very intuitive and completely uncluttered. That’s not an easy task to accomplish when you have a software application loaded with features, but the UI is as clean as they come. The home page gives you options for Video, DVD, Downloader, and Recorder. Each one takes you to the corresponding page, where you’ll see all the relevant tools and options for that function.

The editing feature is simple to use but offers all the options to qualify it to be a truly pro-level software application. There’s not much you can’t do with VideoProc, whether it’s simply choosing the best clips from your video, trimming it, rotating it, altering playback speed, applying a watermark, adding a subtitle file, cropping, merging, and a whole lot more. Once you do your edits, just hit the Run button and a new file will be created with all the changes you made.

Converting one video format into another couldn’t be much simpler than this. Over 370 input and 420+ output file types give you immense freedom to transform a video into a different format that’s suitable for specific devices or platforms. We tried converting videos without and with hardware acceleration (Intel) and there was a clearly discernible jump in speed when the processor was leveraged. As an example, an 840MB 720p MKV video – one of our favorite Suits episodes, by the way – was converted into MP4 in about one and a half minutes. That’s pretty impressive considering that the MacBook Pro that it was tested on is at least 7 years old and never been cleaned up – ever!

Downloading videos is a breeze with VideoProc because it supports over 1000 video hosting platforms and all the top music-sharing sites. There’s an option within the software to sign in to your social media account so you can easily access videos from your subscribed channels, which is convenient when you regularly download from a specific source like YouTube.

The Recorder function lets you take screen video captures with or without the camera option, which activates your device’s camera and adds it to the video capture. You can control the quality and other aspects of the video to be recorded, which makes this an ideal tool to make  YouTube tutorials, explainer videos, and so on. One nifty little feature that VideoProc offers is the ability to hook up your iPhone and use its camera to record a video, thereby giving you access to all of iPhone’s video capabilities right on your desktop.

From a user experience or UX perspective, we give VideoProc a high score. Specifically, we were impressed with its performance in macOS because every serious Mac user knows how hard it is to find the right Mac software in a world of Windows applications. Moreover, the controls are quite intuitive except for a couple of issues that we noticed. First of all, when you’re editing a video and you click on the Back button, it takes you back to the main page. However, if you go back into the Video option, you won’t see your video there. That means any edits you were working on will be gone. Another drawback we noticed was that if you want to simply make a few edits to your video, you still have to hit the Run button to get the output file. It can get a little confusing because the Convert function uses the same button. If you want to retain the original format of the video, you have to be sure to pick the matching output format.

VideoProc was a pleasant surprise because we’ve reviewed a lot of Mac and Windows software in the past and we found that there was a marked difference in UI and UX in most applications. VideoProc offers a near-seamless transition between the two versions, so if you’ve used the Windows version and you want to switch to a MacBook or iMac, there’s no significant learning curve involved.

This is where VideoProc really shines. As Mac users know, there are plenty of free and cheap video editors and converters available; however, their performance usually reflects their pricing! On the other side of the coin are premium tools like Final Cut Pro, which has a base cost of $1000. In stark contrast, a lifetime license for VideoProc is less than $50 at the discounted price. Considering that it is a video editor, video converter, video downloader, and video/screen capture tool rolled into one, the price becomes even more attractive.

Apart from the couple of UX issues that we came across, we felt that VideoProc is easily one of the best video management software utilities around. The price is an absolute steal, the features are plenty, and the user-friendly interface and controls make it suitable for newbies and professionals alike.