WhatsApp, now owned by Facebook, is the world’s leading messaging app. With a user base in excess of one billion, it is extremely popular in many parts of the world, although in the U.S. the more popular messaging apps are SnapChat and Facebook Messenger.

The messaging app recently launched photo and video editing features for its users in a global update, and sources claim that the service is targeting SnapChat’s potential market in the United States. The U.S. current has 41% of its millennials in the age group of 18 to 34 using SnapChat, who share up to 1 billion photos and watch up to 10 billion videos per day.

Facebook’s own user base exceeds 1.65 billion, and with WhatsApp’s 1 billion and Instagram’s 500 million users combined, it now services over 3 billion accounts across three very popular social and messaging apps. But apparently, Facebook wants more engagement for WhatsApp in the United States, where penetration is relatively poor compared to their own messaging service and SnapChat.

To that end, Facebook has announced the new functionality in WhatsApp, which will put it on par with SnapChat’s capabilities of photo and video editing. Facebook has been thinking up ways to monetize the huge user base of WhatsApp, and some time ago they mulled over creating groups where companies could interact with their users. Nothing has yet launched on that front, but knowing Facebook’s ability to effectively monetize social media, I expect we’ll see some movement there fairly soon.

In the meantime, they’re busy beefing up WhatsApp’s capability in preparation for something to come. One unique feature of WhatsApp is that it values user privacy to a great degree, and this could act as the tipping point in its popularity in the United States moving forward. To open a WhatsApp account, all you need is a verified phone number – that’s it. And even messages that you send are deleted from WhatsApp’s servers after a set time limit.

That’s a huge advantage over other messaging apps, which typically collect a vast amount of user information and archive messages, photos and videos and store it on their servers indefinitely. Privacy in the United States is quickly coming to the forefront on the back of so many hacks in recent times, as well as ongoing legal issues with some of the world’s top technology companies like Microsoft, Google and so on.

This key advantage of WhatsApp may well be the unique selling proposition that Facebook will use to popularize the app in the United States. Only when this happens can they profitably monetize the app, since average revenue per user outside the United States is much lower. The graph below clearly shows this. 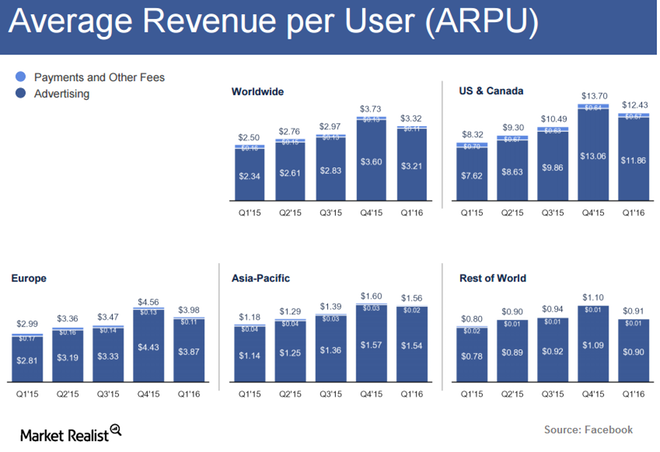 So until they increase their penetration in North America and Europe significantly, there’s not much value in monetizing WhatsApp.

I believe this is Facebook’s ultimate goal for WhatsApp – to first get penetration to an acceptable level in North America and Europe, and then use some system of monetization to start generating a steady stream of revenue from the app.

If they’re successful at doing this, they’ll soon be giving Google a run for its money in the online advertising space. As of now Facebook makes a fifth of what Google does, but that ratio is rapidly changing, and a final push with WhatsApp a few years down the road could well put Facebook on equal standing with Google.

Thanks for reading our work! Please visit the category pages below for more articles on…

If you’re seeing this on Apple News, please favorite the 1redDrop channel to add us to your news feed. Cheers!