Technology is the backbone of global business, and IT spending is a leading indicator of the trends across the hardware, software, services and telecom market. Worldwide IT spending hit $3.375 trillion in 2016, and is expected to reach $3.553 trillion in 2018.

On the hardware front, the devices market experienced plenty of growth in the last ten years, but slowed down in a big way in the last couple of years. And the forecasts for the next few years is less than rosy.

Gartner expects the devices market to stay flat for the next few years. From being worth $588 billion in 2016, it is only expected to add one more billion in the next two years to reach $589 billion by 2018.

A flat market is not a death knell for device manufacturers, but it will definitely weed out some of the weakest players out of the market.

Manufacturers will have to depend on product refreshes and buyer upgrade cycles to keep their sales moving, and hope that their new product launches are capable enough to attract new users. 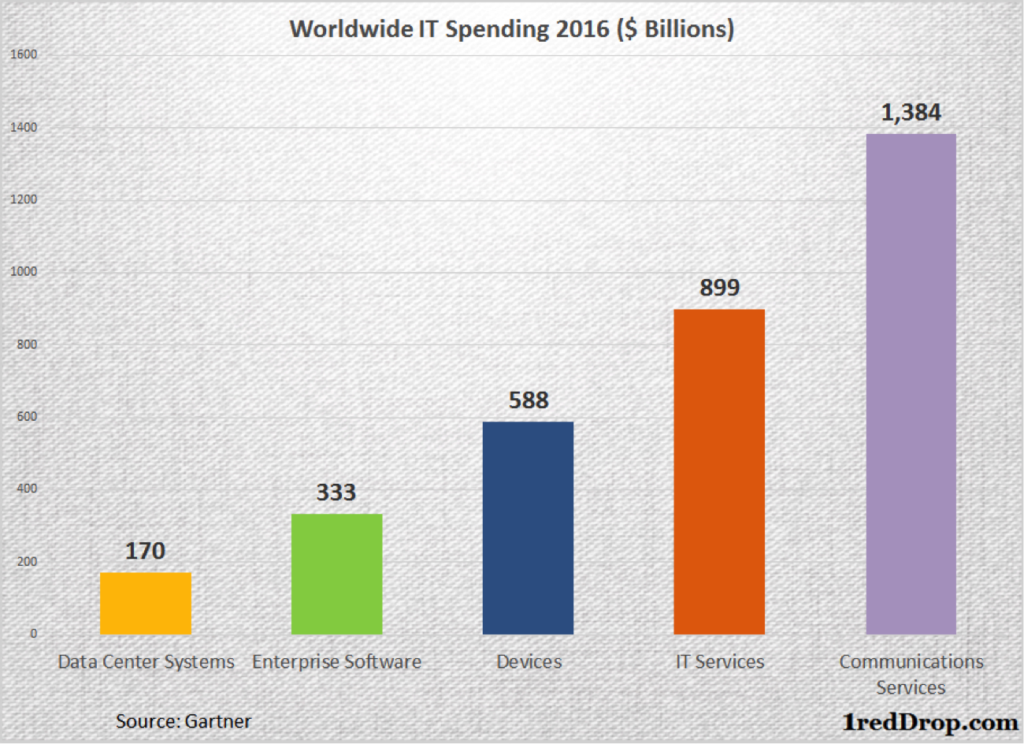 Two other important metrics to keep our eyes on are the sizes of the data center systems and enterprise software market. This is where cloud computing growth shows up. These two segments already account for about half a trillion dollars in annual IT spending, and the bulk of it is going to shift towards cloud computing in the not-too-distant future.

The Shift in Data Center Spending

The Infrastructure as a Service (IaaS) market’s revenue was only $22 billion in 2016, but global spending on data centers was at $170 billion.


The bulk of that money will have come from big infrastructure service providers investing in their own cloud computing capabilities, and from from big enterprises who are running their own data centers. But the fact that expenditure on data centers is several times more than the size of the IaaS market is a clear enough indication that IaaS still has plenty of ground to cover.

Microsoft Azure has been clocking triple-digit growth numbers in the last five quarters and Amazon is growing at above 50% levels, and the size of the data center market shows that their growth rates are not going to run out of breath any time soon.


That shift is inevitable because all the IaaS players are already planning their data center investments over the next several years. All of them need more capacity, and all of them need larger global data center footprints serving the cloud-based needs of their clients.

The Shift in Enterprise Software Spending

Salesforce, Oracle, SAP and Microsoft are some of the leading enterprise software players, and there are several niche players in the market as well.


What must be noted here is that all the top enterprise-serving companies have taken the SaaS route very seriously.

Salesforce is the number one SaaS company as of now in terms of revenue, yet continues to push the envelope with double-digit revenue growth year-over-year every quarter. Oracle poured $9.3 billion dollars to buy NetSuite, the world’s number on Cloud ERP company, as part of its effort to reach ten billion dollars in SaaS revenue. Microsoft has already launched Dynamics 365, its SaaS-based CRM and ERP solution.

Clearly, these companies have already made themselves ready for the SaaS-powered enterprise software world. At more than $300 billion dollars in size, the enterprise market is a huge target for the evolving SaaS product ecosystem that targets business users.

Again, we are at the cusp of witnessing a major shift from spending on software licensing to the pay-as-you-go model that is the defining characteristic of SaaS. That shift is inevitable, and every major SaaS player has already aligned itself to take advantage of it.