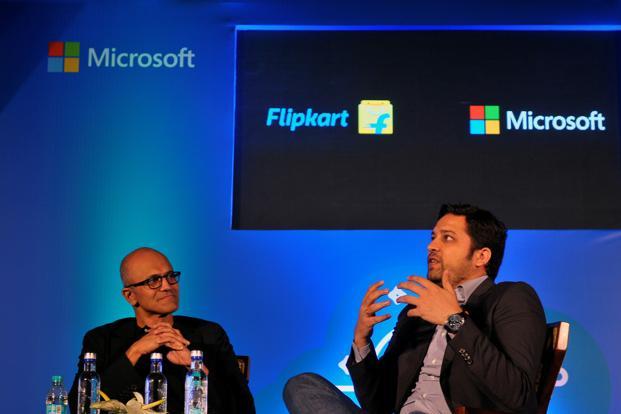 “At Microsoft, we aim to empower every Indian and every Indian organization with technology and key to this is forging strategic partnerships with innovative companies like Flipkart,” said Satya Nadella, CEO, Microsoft. “Combining Microsoft’s cloud platform and AI capabilities with Flipkart’s existing services and data assets, will enable Flipkart to accelerate its digital transformation in e-commerce and deliver new customer experiences.”

Flipkart is one of those rare companies that sort of proved that you can compete with Amazon. So far, in the fast growing Indian e-commerce market, Flipkart has managed to stay very close to Amazon. According to Livemint, Flipkart reported Gross Merchandise Value of INR 2000 crore, or $300 million, in July 2016, while Amazon went a little above that number during that month.

Technology is the driving force behind any e-commerce company, and the infrastructure requirements for large scale e-commerce companies are huge. The Indian e-commerce market is very small compared to its developed counterparts, but it is possibly the one market that can keep growing for a long time.

India’s e-commerce revenue is expected to jump from $30 billion in 2016 to $120 billion in 2020, growing at an annual rate of 51%, the highest in the world, according to a joint ASSOCHAM – Forrester study.

As is the case with most e-commerce markets the Indian market will also be dominated by a handful of players like Flipkart and Amazon. As Flipkart keeps growing, its infrastructure footprint will also keep growing, and so will Microsoft Azure revenues from Flipkart.

Microsoft Azure’s growth has been strong in India. We’ve covered the topic in an earlier article; excerpt below:

Though one billion dollars in annual revenue looks extremely small for a company that’s very close to $100 billion in annual revenue, the fact that revenue has jumped by 100% in the fastest growing economy in the world bodes well for Microsoft’s future in the region.

Microsoft has already bagged several marquee clients, as well as well-known startups in the country, into its cloud. Microsoft was the first company to offer cloud-based services from India, opening three datacenters in the country in the second half of 2015 – ahead of its original schedule, and a move that has paid off really well for the company.”


Now, with Flipkart, Microsoft has bagged a company that can keep its coffers ticking for many more years. And let’s not forget that Flipkart will be adopting Microsoft Azure as its “exclusive public cloud platform”. Seen from Amazon’s perspective, it reminds me of the old adage: “The enemy of my enemy is my friend.”

Cloud Hosted Service: Benefits & Drawbacks You Should Know About