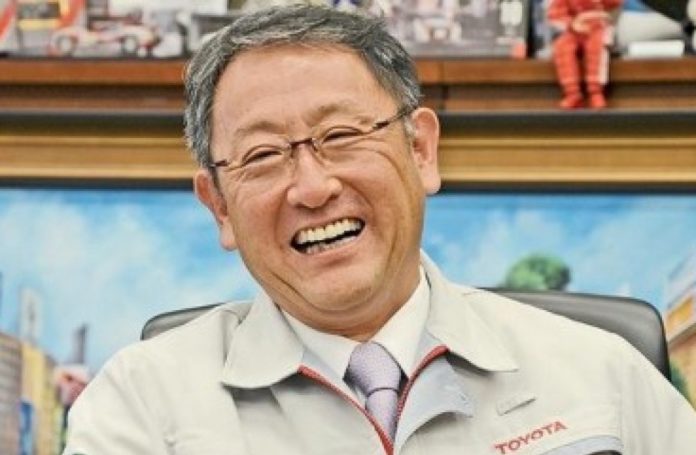 One of the world’s largest carmakers, Toyota Motor, sees Tesla as leading the way for EV development. Finally moving into first gear on EVs late last year after struggling with their fuel cell efforts, Toyota now has its eyes on Tesla, which its CEO considers to be the iPhone of automobiles.

Extending that thought further, he said:

“When it comes to electric vehicles, every car, be it the Yaris or whatever, once it is electrified, the acceleration is all the same. The reason I am responsible for EVs as well is that I don’t want to make these cars a commodity. Even with the electrification of the vehicles, I want the prefix “I love’ to be affixed to those cars.”

This is after Toyota put him personally in charge of the new division to develop their first all-electric vehicle by 2020.

Tesla CEO Elon Musk knows that his concept and company have spurred automakers in the direction of EVs, but it’s certainly a big achievement to hear candid praise from the heads of several of the world’s largest automakers in an industry that is more than 100 years old.

Three days ago, the CEO of Volvo, Hakan Samuelsson, gave Tesla the credit for creating the kind of strong demand that electric vehicles enjoy today.

Even Volkswagen, one of the world’s largest auto brands, has recognized Tesla’s leadership in this space, though not in such a friendly manner as Volvo or Toyota:

“ is a competitor we take seriously. Tesla comes from a high-priced segment, however they are moving down. It’s our ambition, with our new architecture, to stop them there, to rein them in,” said Herbert Diess, head of the VW brand.

If massively huge automobile companies collectively agree that Tesla Motors is a company to watch, compete with and learn from, then Tesla must be doing something right.

Elon Musk has a lot of enemies, but some of them appear to be warming up to his efforts towards promoting the shift towards electric vehicles. None of the recent acceleration in EV development would have been possible without his incessant push to create more affordable electric cars for the future.

Giants like GM and Ford have certainly taken note, and GM’s Chevy Bolt is a perfect example of how a decade-old company can force a century-old company to move its assets and really do something for the future.

Twenty years from now, Tesla may not be the highest selling EV brand in the world, or the one in most demand. But Musk and Tesla have already become immortal as the keys that started the auto industry on a new journey towards more sustainable transportation.