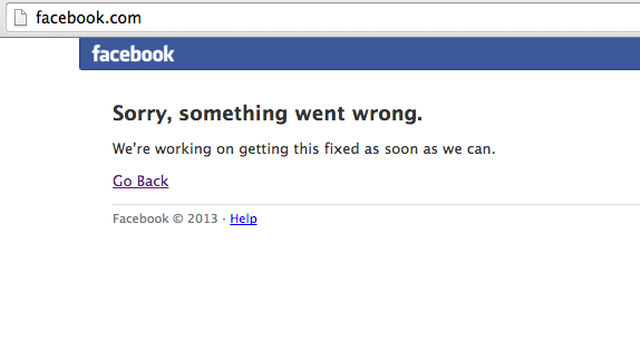 Late last week Facebook and Instagram users were facing real-time outages and other online issues. A few users were only able to gain partial access, while the others were not able to access the platforms at all.

Facebook confirmed the outage in a statement to CNNMoney. The company quickly reacted to the situation and said it was currently in the process of restoring the service and apologized for the inconvenience caused to the users. The technical issues behind the outages are still not known, but the issue was resolved quickly.

The issues seemed to be on both mobile and web. Users were unable to access the mailbox, upload images and post updates. The several pop ups while accessing the page included – “temporary problem with this post”, “the issue with the URL” and asking the user to retry in a few minutes. A few even got this message: “Facebook is down for required maintenance”.

In the US and Europe, they mostly faced log-in problems, while the others had a set of other issues like uploading videos, posting comments and loading pages.

Facebook has over two billion monthly active users across the world, and it is unknown how widespread the problem really was.

“This page isn’t working”, and so on…

The last time Facebook faced such issue was back in January 2015, for fifty minutes. The company reported that it occurred while attempting to change something within the systems, which went wrong.

In 2014, outages occurred twice – in the month of June and August. In the month of June, it was down for 31 minutes and the frequency in the down time increased. In August, it was reported that it happened due to server error.

In 2013, a similar issue occurred where the users experienced difficulty in accessing the site, and had issues posting and commenting. In September 2010, the site was down for two hours, and it was reported as a networking problem caused by its engineers.

In 2007 July, it was a different scenario, where the site was pulled offline intentionally by the engineers.

Notably, the company was quick in responding to the issues each time and acted as quickly as possible.