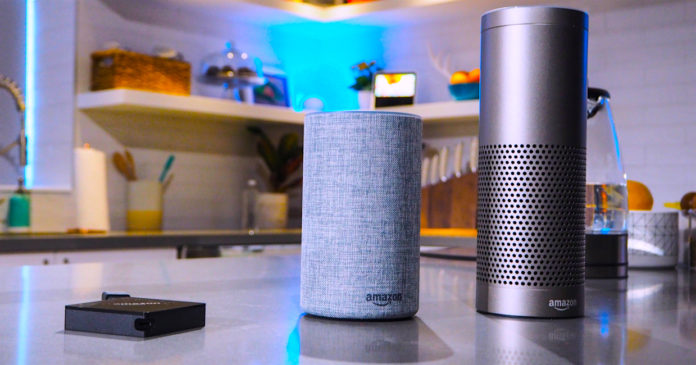 If Google has any eyes on the smart home market, they’d better re-think their strategy, at least where smart speakers are concerned. Amazon now has a total of 8 Echo products that, in various combinations, pretty much achieve everything that a smart speaker in a smart home should, including offer a visual experience.

The three latest additions to the line up of Alexa-enabled smart products are the Echo Plus, the Echo Spot and the Echo Connect. Each voice-enabled Echo device, including the older models, builds on the strengths of its predecessor. Each has a purpose of its own, and the pricing covers a wide range from $50 for the Echo Dot to $230 for the Echo Show with the touchscreen.

Why So Many Echo Products, Amazon?

Recognizing that there is a need for more than one product, Amazon is releasing a slew of niche products specifically designed for a particular niche. The Echo Buttons, for example, are controllers that can be used when gaming with Alexa on an Echo device. The Echo Show brought in the visual experience. The Echo Look caters to the fashion-conscious, and so on.

With each product introduction, Amazon is closing the gates for competitors in the smart home assistant space. Alexa is not inherently more intelligent that peers like Siri or Google Assistant. In fact, it is highly dependent on specific voice commands and programmed for specific products from other companies. But it is, by far, the most prolific of them.

The latest Echo products are clearly an attempt to bridge much of what’s missing in the current line-up of products. The Echo Spot, for example, has a small screen for video and voice calls, it doubles up as an alarm clock and, more importantly, it can connect with larger speakers. It will retail for $129.99 and will be available starting December 19, 2017, right before Christmas, when the Echo Spot will most likely be showcased as the perfect last-minute gift for that special someone. Clever, right?

The Echo Plus comes out at the end of this month, on October 31, 2017, and will retail for $149.99. It’s an upgraded version of the original Amazon Echo, and comes with a built-in smart home hub that can control gadgets from a large collection of over 100 Amazon partners. It also includes a Hue smart bulb that you can use to try out the Echo Plus’ smart home capabilities.

Last, but not least, is the Echo Connect, which is Amazon’s somewhat clumsy answer to Google Home’s ability to handle calls to mobiles and landlines. The $34.99 device is essentially a VoIP interface that lets you take calls coming to your home number, but on your Echo device. That’s coming out at the end of the year as well, on December 13, 2017.

In all, that’s 8 different Echo products born of a single concept called the Amazon Echo. Little did Amazon realize that the humble Echo smart speaker would help spur an entire industry for voice-enabled smart home gadgetry. But once it realized this, the company lost no time churning out product after product around the same basic consumer need to speak and get things done.

Despite the fact that Alexa isn’t the brightest of the bunch, what the company has done with this relatively simple-minded, voice-commands-based AI entity is truly something to be admired. The other players are all deep-pocketed technology companies like Apple, Microsoft, Google, Samsung and so on, but it was an e-commerce retailer that had the vision to jump start the voice-activated smart home speaker category of products that will eventually grow to be a massive multi-billion-dollar industry. It already is, as far as the consumer side is concerned:

“The voice recognition technique is widely used in consumer electronics devices such as smartphones, tablets, laptops, and connected devices. The escalating demand for the Internet of Things (IoT) devices is further fueling the demand for voice recognition in the ‘consumer’ vertical. The consumer segment was valued at USD 6.54 billion in 2015 and is expected to expand at a CAGR of 13.9% over the forecast period.” – Research Report

The Internet of Things being referred to in the report is nothing more than smart gadgets that we use around the home, in the office, on the streets and practically everywhere else. Voice recognition devices, a small segment within that market, alone is already worth in excess of $6 billion, and it is expected to grow at a healthy 14% over the next several years.

Amazon is now at the forefront of that growth, and the company’s many partnerships will ensure that Alexa dominates the space. At the rate at which Amazon is moving, none of the aforementioned tech companies are going to be able to mount an attack on Amazon’s market share in this space. It was already predicted a while ago that Echo devices will grab more than 70% share of the smart speaker market. And now it looks like that’s low-balling the actual figure.

Who Has a Viable Rival Product?

Right now, Alphabet’s Google is the only one with a comparable product for developed markets. Apple’s HomePod will be out soon, as will Microsoft’s Invoke in partnership with Harman-Kardon. Samsung has scrapped its plans for a Bixby smart speaker because of the sheer competitiveness of the segment, and that could actually be a wise decision judging by Amazon’s aggressiveness in dominating the space. LG and a couple of others have their own versions, but nothing as mainstream as the Echo and the Home.

How much traction can Google Home and the highly anticipated Google Home 2 gain this year against Amazon Echo devices? We don’t know, but we know that it will be minimal. Other products will only be marginal in terms of sales figures.

Granted, a product from Apple or Microsoft may manage to gain some market share, but it will take time because millions of consumers are already hooked on Echo products, and on Alexa. Besides, no other product can offer a voice shopping experience except for the Google Home, which offers voice shopping via the Google Express service.

Extrapolated from the current scenario, it appears that Amazon’s Echo devices will dominate this space for a long time to come, with Google taking a distant second place and all the others fighting for percentage points. Things could change once the HomePod or Invoke are released, but the chances of that happening are quite slim.

For now, it’s Amazon at the top, and that’s how it’s going to stay for the foreseeable future.