Costco Wholesale Corporation (COST) crushed its fourth quarter 2017 earnings, only to watch its own stock price crushed as a reward from investors. The leading warehouse company in the United States reported stellar numbers during the fourth quarter, easily topping analyst estimates. Under normal circumstances, when a company beats Wall Street estimates at the top line and the bottom line, it would have sent the stock soaring northward. So, what happened with COST?

In short, these are not normal circumstances, certainly not in the retail world where the word “Amazon” is a enough to send chills down quite a few spines.

Costco reported revenues of $42.30 billion and earnings per share of $2.08, much better than the Wall Street expectation of $41.55 billion and earnings per share of $2.02. But the company’s stock plunged nearly 6% by Friday’s close (10/6/2017). The above-average results clearly resulted in a horrible response from the market, but one factor could have contributed to this: Costco’s membership renewal rate showed signs of weakness during the quarter.

The one other factor that could have been be blamed for the stock’s meltdown is Costco’s gross margin, which shrank by 15 points during the fourth quarter. But there’s a strong case against that argument: Every retailer knows that you need to eat into your margins to keep your sales up. You cannot be increasing prices and expecting customers to be more than happy to buy from you, while all other retailers are bending over backwards to cut prices and dole out promotions. So, margins can’t be reason for Costco’s slide, simply because everyone’s margin is shrinking; moreover, Amazon has margins that are actually as thin as wafers. So, that theory doesn’t hold water.

Up until this quarter, Costco remained nearly oblivious to what was happening in the US retail market. The warehouse chain with 514 stores spread across 44 states in its domestic market saw its customers renew their membership at record rates until this fateful quarter. 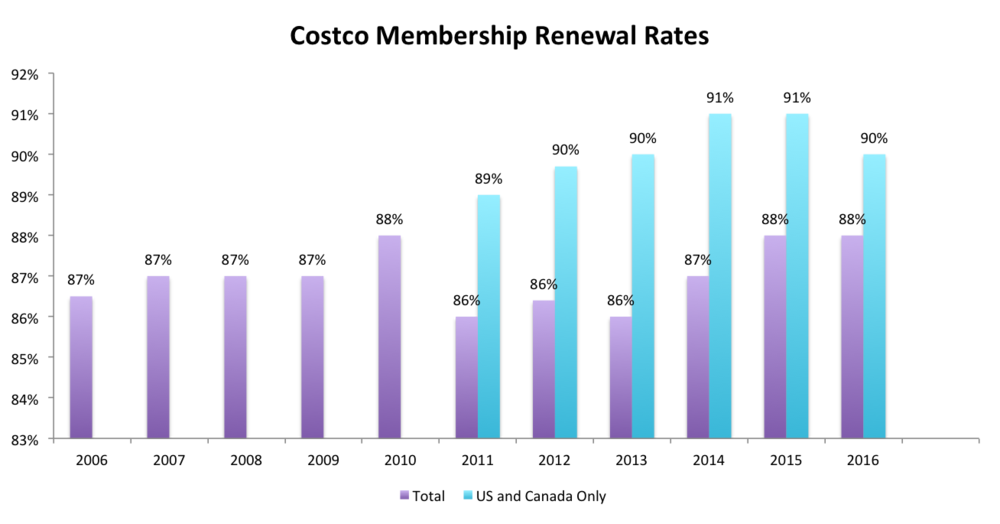 Whichever way you look at it, having nine out of ten members renewing their memberships is great, and Costco did that at a time when Amazon was adding billions of dollars to its revenues each quarter and Wal-Mart was adding billions to its own. All of that has been happening in a market that was hardly expanding.

In terms of renewal rates, at year end, business members renewed at 94%, Gold Star members at 89.3%, these are numbers for the US and Canada combined, which is over 80% of our company and total US and Canada 90.0%, and worldwide, 87.2%, a slight tick down of a tenth or two from the last quarter. – Richard Galanti, Costco CEO Q4-17 Earnings Call

Costco blamed the forced credit card conversion of last year for negatively impacting its renewal rates during the quarter. To recap, the company dropped American Express cards in favor of Citi Visa last year. There will naturally be some customers lost in the fray when you choose to completely drop a card provider and go with a new one.

But, thankfully, the forced credit card swap didn’t affect Costco’s membership base all that much, and the company closed the year with 90.3 million members, a good increase from the 86.7 million customers it had by the end of last year.

So, let’s get this straight. Costco beats Wall Street analysts by a huge margin, and posts quarterly sales growth of 15.8%; meanwhile, same store sales were up in the United States, by 5.5%; moreover, the company increased the number of members in the order of millions; finally, it does all this while large retailers in the country are struggling to even report any sort of sales growth. Despite all this, Costco lost six percent of its value because its membership renewal rate was down by a tenth or two.

The only possible conclusion of this analysis is that retail investors are in panic mode, and they’re looking for any reason to dump brick and mortar retailers’ stock. Even if we want to assume that membership renewal rates are going to keep edging lower, it’s far too early to say that this minor event will trigger a future slide. It’s just too soon to make that kind of call, but Costco was, unfortunately, at the receiving end of just such a market quirk.